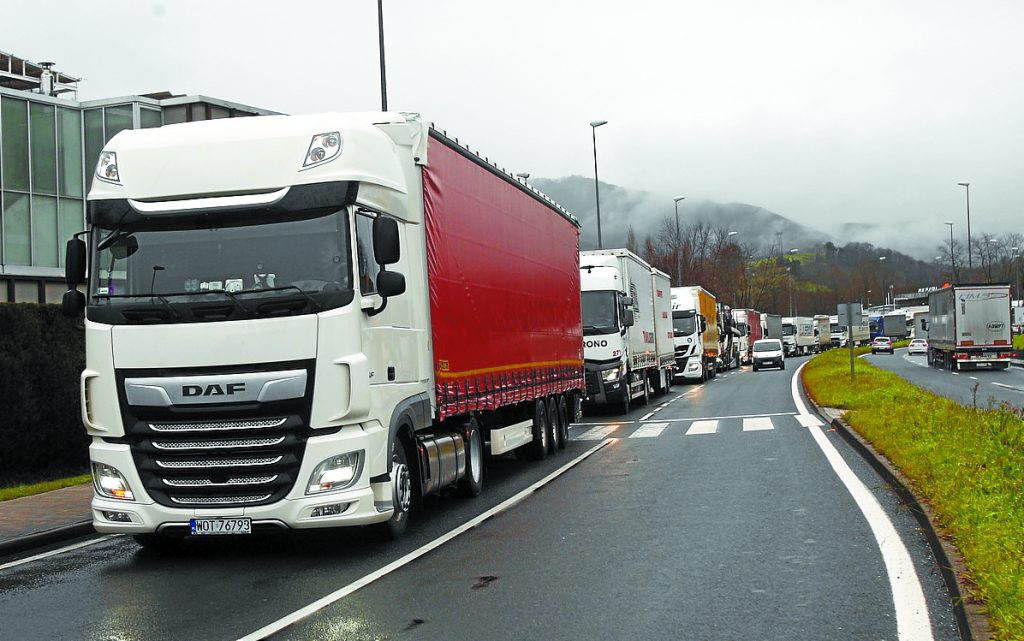 The Guipuzcoana Businessmen Association for the Transportation of Goods by Road (Guitrans) sent a letter to the Director of Traffic of the Basque Country, Sonya Diez de CorqueiraYou are asked to take steps to avoid Huge truck queues That is formed on Monday in Irun. Reservations are not new, but have been confirmed since the UK left the European Union on January 1, so that part of the heavy vehicles with a destination and origin in that country are obligated to carry them out. Customs procedures In the border city.

Mario Palacios, Guitrans chief, indicates this problem was coming. “We have already warned, however They ignored us. The customs parking area in Zeise was sufficient for carriers heading outside the European Union, only three or four countries, but the situation has changed radically with Brexit. Lots of trucks go to England and There is no capacity for parking To attend this growing activity. “

Palacios explains that the problem is focused on Monday, when trucks go to the border after a weekend break, being banned between 10pm on Saturday and 10pm on Sundays in France. «Ertzaintza does not differentiate Among those who go to Zaisa to load or unload, those who move through France and those who go to England. Only the latter must pass through customs. When the parking lot fills up, the police put them in a line up to the toll booth on the highway which also collapses on the road to Endarlitza. In those long lines Remain trapped All trucks, whether you go to England or not.

Guitrans chief points out possible solutions to expand Zaisa’s parking area. The other alternative would be Posting on the highway That indicates the route to customs, allowing the rest of the trucks to use the others.

Palacios stresses the need to find a solution as soon as possible, otherwise the problem will continue. “In Irun and the surrounding areas there are many industrial zones to which many trucks go. What could not be is that Ertzaintza, even if you go to Zaisa, prevents you from entering and forces you to go to Bera to change direction and line up, Wasting every morning. Additionally – Guitrans chief confirms – in N-121 The risk of accidents, Because light vehicles bypass queued trucks in sections where there are only two-way lanes.

Currently, around 1,000 trucks pass through the border every day, bound for the UK. Not all of them depend. Martin Vizier, President of the College of Customs Agents, Clarifies that only those that must be sealed for sanitary, veterinary or phytosanitary reasons should be discontinued, as well as those governed by the T2 and Tir standard. In total, Visiers notes, out of 1,000 vehicles, Monday Stops around 100The rest of the week, a number that drops to 30.

Therefore, it indicates that the cause of the problem is Heavy vehicles from UK. “There are usually 40 to 100 trucks loaded on Fridays and Saturdays, arriving in Irun on Mondays. Those, to whom we must add those who come from other countries outside the European Union, are obligated to stop, and to occupy the entire car park – it contains only 60 places – leaving the rest without space, which causes waiting lines. ”

Visiers says the problem is on its way to being fixed. The school he heads has reached an agreement with Zeisa to empower another school Additional parking. Vysers notes that the Civil Guard will stamp the documents in it as if it were a customs waiting area. This variant will be launched next Monday.

A month has passed since Brexit was implemented, and Basque companies that trade with the UK have taken their toll, regardless of how far a deal was struck to avoid a messy exit. The main problems were identified in issues such as rules of origin, the resulting bureaucracy, and mobility of workers, according to consultations received by the Basque government. To analyze these difficulties, the Executive Authority organized yesterday a conference headed by the Minister of Economic Development, Arantexa Tapia, in which 250 companies participated “via the Internet”.

One of the major problems is the mobility of workers. A Basque company that wants to send employees to its British branch is required to obtain a visa under the current point system. It is required to “verify the salary of 25,600 pounds and a certain level of English language.” There is the possibility to travel for work, without a visa, for a period of six months, but only under certain conditions.