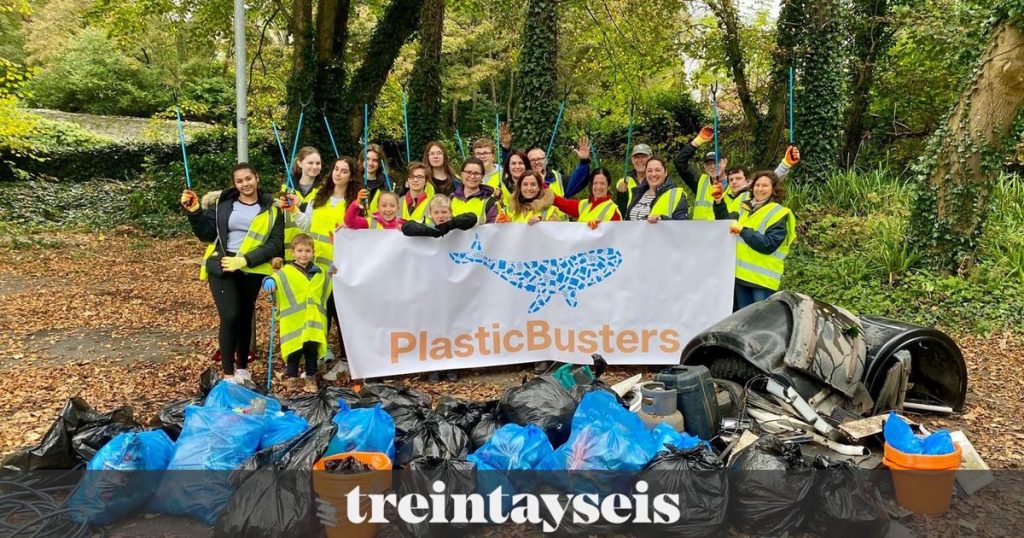 Do you want to do something for the environment but don’t know where to start? Do you have a little time to do activities and get involved with an NGO dedicated to caring for nature? For all those who want to contribute their grain of sand to the care of our planet but don’t know how, Plastic Busters presents a unique opportunity And where complete flexibility is part of its great success so far.

through the initiative build the worldlaunched by this organization a little less than two years ago, It is possible for any person, group, company or organization to adopt any place they can locate on the map and undertake to take care of it according to their capabilities. Options, everything one can imagine; Goal: take care of our world. A company decides to adopt their street, a school adopts a park, a family adopts the city they go on vacation, a neighbor who does the same with the gardens in front of his house, a father who adopts the street who takes her children to school, a group of friends to the nearby beach…

“I’ve been concerned about the environment since I was young, I went country weekends with my parents and was also 10+ years at Boy Scouts in Spain and had a little bit of a passion for nature and conservation,” he says. Jaime Amoedo, founder of Plastic Busters, who has focused on the Galician community looking for volunteers.

This Madrilenian, With over 30 years of experience in the financial sector, he combines his career with one of his great passions: caring for the planet. After several years of working in different countries in the hands of an international financial giant, Amoedo landed on the Isle of Man, where he no longer wanted to move, so he gave up his job to be able to stay in that place, and the place he is. A non-governmental organization that today has hundreds of followers.

“I really like walking and when I came here I decided to travel every road on the island, which is over 1,000 km in size, and On all those rounds I would see that on the side of the road I would always find a bottle and a can and all sorts of things, and little by little I started to pick it up. I went with a bag and collected what I could But in the end, on these 4 or 5 hour walks, I almost needed a truck behind me to take whatever I found. That’s when the idea came to me to set up a group, first here on the island, with colleagues from the bank,” says Amoedo.

“We met once a week and went to different places, the forests, the beaches, the roads, the streets, to collect what we found. One thing led to another and we reached out to the schools, the local government, and we started getting more and more people involved.”

According to Jaime, With the pandemic also came the difficulty of getting together and doing group activities, “but we needed volunteers to keep doing things to take care of the environment.” And we started launching many initiatives that did not have to be local but could easily be global, and so we launched many international campaigns.”

do like this Embrace the World, an initiative that already has thousands of accredited places in more than 100 countries. “We’ve done everything through social networking, which is an exceptional and cheap medium, a lot of people have shown an interest, we have reached out to many groups that do this kind of initiative and people and companies that want to do something through the medium and environment,” he explains.

Record in 20 seconds with complete flexibility

across the This organization’s websiteAnd in less than half a minute, You can start your own path towards the environment. In a proper name, it is the name of a family, company, group, or simply a pseudonym for any person You can become part of this campaign.

“The issue of going out and collecting garbage is nothing new, especially as there are some countries in which it is highly developed, such as the US and UK, where they have been doing it for decades – although the problem is never ending -. But we wanted what we wanted. It was something Completely flexible in terms of how much time you spend, where you spend, and with whom you go; Something that would be true for anyone. Sometimes in activities that are performed in a group, such as a person in a wheelchair, if the area they will be working in is in the middle of a mountain, they are still unable to participate, or it is not a suitable area for young children. This is where you really want it.”

part of the greats The success of this initiative is precisely that people choose the place This is part of their life and that they have a certain affection for it, for whatever reason. “It’s not about getting a group of people together and telling them we’re going to clean Beach X, where they’ve never been before. You choose where you care: It could be where you go to play with your kids, or the small town you’re vacationing in. In the summer, or that your parents were from there, or your grandparents… A place that touches your heart. And if you start with a site that is important to you, it will always be easier,” explains the creator of the project.

In addition, the person or group, shortly after registration, receives a A welcome email and another with an e-diploma with the name you used and the place you adopted it. “This has worked really well and is a way for people to spread the word about the project. The kids are proud and the companies or businesses are interested in letting their customers know that they are part of the campaign. Plus, for everyone who signs up we planted a tree, so even if people did nothing at all, we planted At least they have a tree.”

The initiative received many International recognition, including the latest UNESCO award.

Plastic Violators website introduces All necessary information about the campaign and recommendations for anyone who dares to participate. In addition, they are working to make the approved venue selection more interactive. “We are about to launch a new app. Now you type in the place and we search for it, but with the new tool people will be able to do it directly by searching for the place on the map,” says Amoedo.

on The effect of responsible small gestures with the environment, Jaime stresses, is a reality. “If each of us adopted a little place, with the millions of people inhabiting this planet, of course that would have an impact.”

“I I know Galicia well and have a lot of affection for it, which is why it is an area that I thought we had to get into. It is also very similar in mountain science, landscape, etc. To the Isle of Man, where I live, it is so green, there are beaches, cliffs, and there is absolute nature everywhere,” says Jaime of the interest in spreading the campaign in this area.

Regarding the “most adoptable” sites in this community, Jaime stresses that anyone and insists on the idea that in the end It is about taking care of the places one goes, as one passes on a regular basis. “At the end, it’s seconds, you come out with a glove and a bag, and unfortunately, in fifteen seconds, you find three or four things. It’s horror. The streets and parks are very successful, but also the beaches, because there are people who like to walk around on the weekends and also because you can see firsthand the effect of garbage on the fish.”

The organization also confirms that many people have thanked them for the initiative that encouraged them to do some physical exercise and go out for a purpose. “Investing some time in the environment has been shown to help you relax, breathe better, etc. It’s an excuse to go out, do something, and see new places.”

Regarding the future and challenges of this successful initiative, its creator asserts that continued growth will be key: “Our dream is that one day the whole world can adopt it.”

Additionally, Amoedo highlights youth education and awareness as one of its great areas of work. “We are starting to do a lot of things with schools. And those who are polluting are young people. Children and the elderly, in general, have a lot more awareness, but where we have a real challenge is the teenagers. He asserts that it is a more rebellious age in which this does not worry them so much, and we have a great challenge in entering the world of education and making time for education.”

On the work done with Schools, founder of Plastic Busters, ensures that the organization provides them with all the necessary information, helps them organize the activity, tells them what to do with what they collect, etc. “We have quite a few schools that are registered and they are A type of group that interests us a lot because if you teach them from a young age to care and have that awarenessTomorrow they will think too much to throw the bottle anywhere.”