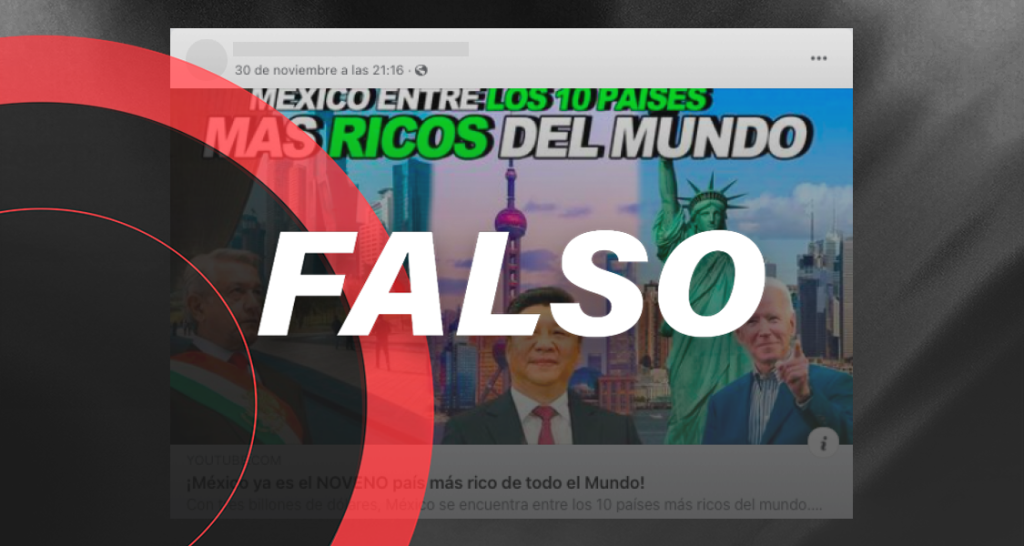 Posts from media and social network users confirm, according to a report by consulting firm McKinsey & Company, Mexico is among the 10 richest countries in the world, along with the United States and China.

However, this is misinformation, since then The report does not rank these countries as the richest in the world. In fact, the work analyzes the development of capital in these countries and determines that they together concentrate about 60% of the world’s wealth.

“the choice It is not based on them being the richest in the worldexplained political animal Jean Michke, one of the authors of the McKinsey Report.

Read more: Extreme income inequality: 10% of the richest in Mexico earn 30 times more than the poorest

Although the report does not mention the 10 richest countries, Users of news sites and social media have used it to indicate that Mexico is in this group.

“Conservatives won’t like this. Mexico is at the forefront of the richest countries, according to Forbes magazine. McKinsey & Co analysis indicates that 60% of global wealth is concentrated in 9 countries,” says the Twitter message, which collected 370 reactions.

Facebook posts containing misinformation about this report Shared thousands of times, according to the CrowdTangle tool.

Find out: No, AMLO is not part of the list of the richest men in Latin America

“Mexico is already the ninth richest country in the world!” Says the headline of the YouTube video, which has garnered 151 thousand views.

What does the study say?

studying The Continuous Rise of the Global Balance: How Productively Do We Use Our Wealth? Available in Spanish in this league, analyzes how the global economy has changed in two decades, taking ten countries as a sample.

The text says that Australia, Canada, China, France, Germany, Japan, Mexico, Sweden, the United Kingdom, and the United States, “represent about 60 percent of global GDP”. This, without emphasizing that they are the richest in the world.

“Net worth has tripled since 2000, but the increase primarily reflects gains from valuing real estate assets, particularly real estate,” the report says.

political animal He contacted McKinsey to see if Mexico, based on his report, could be considered one of the richest countries in the world.

Jean Michke, one of the text’s authors, noted in the e-mailed responses that “the choice It is not based on them being the richest in the world.”

He explained that Mexico was added as a large emerging economy with great resources and good data.

It may interest you: a tax on wealth in Mexico?

The ten countries in our study were chosen to cover a large portion of the global economy and a variety of countries (Different stages of development, different resources, different demographics, different financial markets and pension system composition, different volumes, different export profile), added the specialist.

In addition, according to Information collected from the International Monetary Fund by StatistaMexico does not appear in the list of the 15 countries with the highest GDP – one way by which a country’s wealth is measured.

FinallyIt is wrong that the McKinsey study concludes that Mexico is one of the richest countries in the world. The report analyzes the development of capital in 10 countries, which account for 60% of global GDP.

What we do at Animal Político requires professional journalists, teamwork, maintaining a dialogue with readers and something very important: independence. You can help us keep going. Be part of the team. Subscribe to Animal Político, get benefits and support free journalism.
See also  Universities no longer pursue quality education, they seek profit - the global system