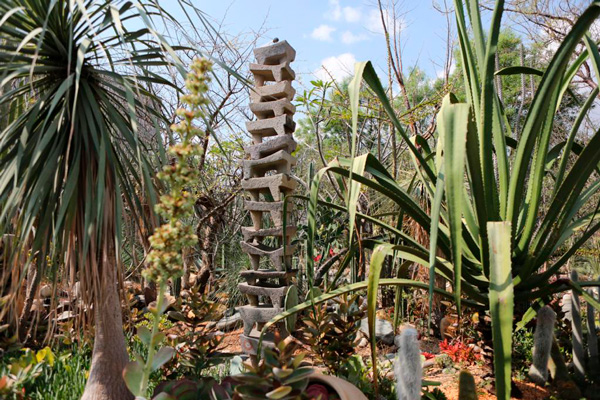 This park is located on the southern slope of Monte Alban, in Tula Street No. 624, Las Culturas district in the municipality of Santa Cruz Exxocutlan.

Santa Cruz Zoxocutlan, Oaks. – Oaxaca never ceases to amaze us, for example “Vives Verde”, a magical place that has been transformed, like a story, from a landfill into a garden of sculpture and botanical beauty. This was expressed by the Honorary President of the Oaxaca DIF System to Paco, in charge of this wonderful space.

During his tour, the wife of the ruler Alejandro Murat Hinojosa was able to see the artworks made on the site, and when mixed with nature, breathtaking views are obtained.

This wonderful park is a sample of the great talent present in the state, which regardless of its location or its circumstances, to bring about an important change. People like Baku, they transport us and inspire us to keep working day after day, to achieve strong Oaxaca, with opportunities, Oaxaca that continues to grow in every way. Vives Verde is an example of what we can do with yards and gardens. Congratulations Baku, and I insist Oaxaca has everything, “the head of state stated the DIF.

Baku, who is in charge of the park “Vives Verde”, assured that this project was born out of a private initiative, but now it has grown so much that they decided to share it with the world. He pointed out that this park had been visited by people from Europe, the north of the country, the United States, and South America, and that this achievement was a pleasure as Oaxacan.

“In 2010, this space was a landfill, attached to a rain stream, that is also being cleaned. We gave this space a radical turn, and got it back in order to give it a new face, something that fills us with pride. He pointed out that in the same way we devote ourselves to developing sculptures. Combined with nature, it delivers significant results.

This park is located on the southern slope of Monte Alban, in Tula Street No. 624, Las Culturas district in the municipality of Santa Cruz Exxocutlan. They can be contacted by phone at 951 888 6761, as well as on their social media networks, such as Facebook as “Vives Verde” and Instagram as “Vives Verde Landscape”.