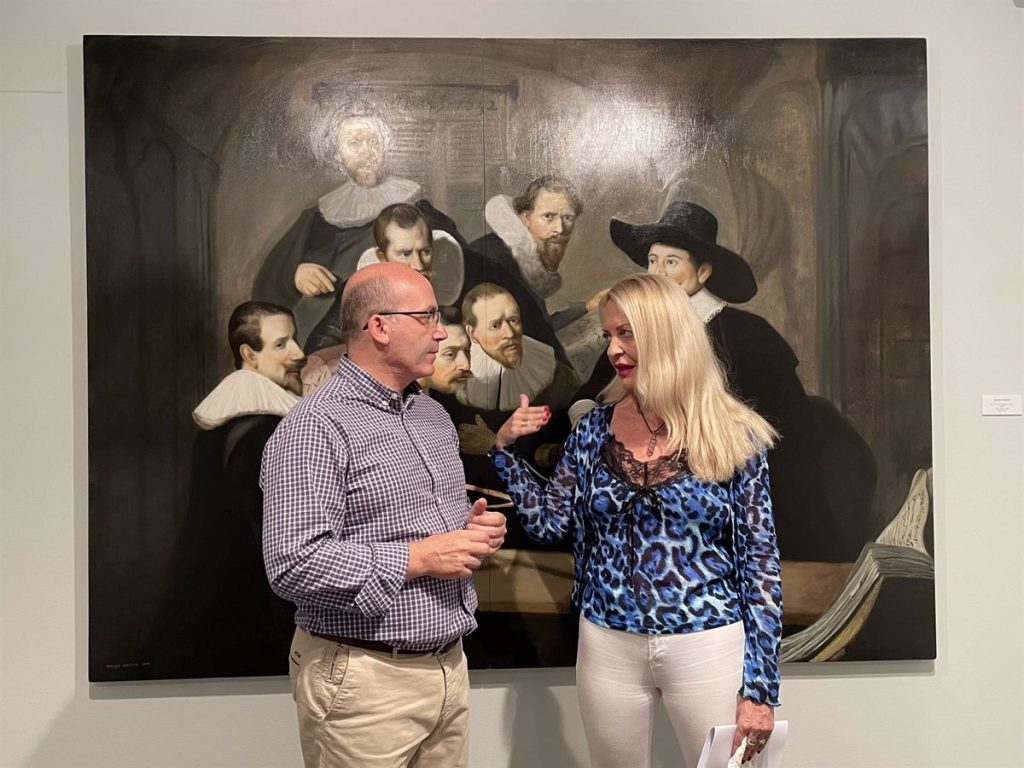 The fourth space of the Zaragoza Provincial Council (DPZ) will host from July 6 “A Look at the Classics,” an exhibition in which artist Enrique Gonzalez Flores justifies painting as a current artistic language. In this exhibition, consisting of 29 works, he reinterprets some of the most famous paintings with a contemporary vision.

On Wednesday during the presentation of this exhibition, Deputy Culture Delegate of the Depotación de Zaragoza, Ross Sihuilo, stressed that it “invites the viewer to enter into the game and dialogue that the artist proposes” and to think “why this beauty persists over time and how lessons can be learned from the excellence that It continues to endure despite the passage of time.”

For the regional institution, it is a “pride” to be able to display this exhibition, as Cihuelo has expressed, and at the same time added that this artist’s works are part of the collection of museums in Spain, Colombia, Canada and France. Or the United States, among other countries.

DPZ Vice Culture Director explained that “A Look at the Classics” are works that are easily recognizable from different angles that will make attendees think about why light is, what is intuition, and what is intentionally hidden.

The exhibition can be visited until the end of August in Room Espacio 4º located on Calle Coso, 50. The exhibition will remain open to the public from Tuesday to Saturday from 11:00 am to 2:00 pm and from 6:00 am. Evening to 9:00 pm while on Sundays and holidays it will only be open in the morning.

Seeing the artist himself

For his part, the artist Enrique Gonzalez himself expressed that the drawing is not a scheme but based on intuition and this type of exhibition, which collects part of his work in the same space, serves to reflect on the work he does.

The artist admitted that he likes to give the classics a central role and try to recreate them in order to bring them into the 21st century, thereby arousing interest in today’s audience.

Through his work he analyzes the works of great artists and attempts to restore painting “exactly” as Velázquez or Goya did in his day and tries to analyze brushstrokes, method of work or glaze “down to the smallest detail”. “Everything is invented, everything is in classical painting,” he added.

The first work that the viewer encounters upon entering the gallery is a reinterpretation of “El perro semhundido” by Francisco de Goya. This painting, in which the dog mysteriously looks, was analyzed by Gonzalez from his point of view and decided to include some birds, since the artist himself said that he liked to put animals in his paintings.

Work is the result of a combination of influences

Enrique Gonzalez’s work is a mixture of influences, memories, and a passion for light, shadow, and painting. His paintings are, on most occasions, familiar to the public and convey a sense of mystery. In his paintings reality coexists with fiction and intends to question humanity through a game of denial.

The artist draws inspiration from music, poetry, film, and performing arts, as well as Spanish and Italian Renaissance painters. After four decades of devoting himself to the world of painting, Enrique Gonzalez has his own personal language, and in each of his works he attempts to answer the question “Why do I do what I do?”

In fact, in some of his paintings, a portion of the painting has remained hidden by a gilded wooden frame for the artistic purpose of maintaining an aura of mystery around the work.

Enrique González began in the world of art in a scientific way, since from his childhood he had a great fascination for drawing and painting. In the 1980s he attended a private drawing school where he also received training in the world of engraving.

He was also a student at the Brita Prinz Arte Gallery Workshop and subsequently, taught engraving and lithography classes at the House of Culture in San Lorenzo del Escorial for nearly two decades.

In 2006, he started a project to edit a magazine called “Engraving and Edition”, dedicated to the publication of engraving technique and national and international art.