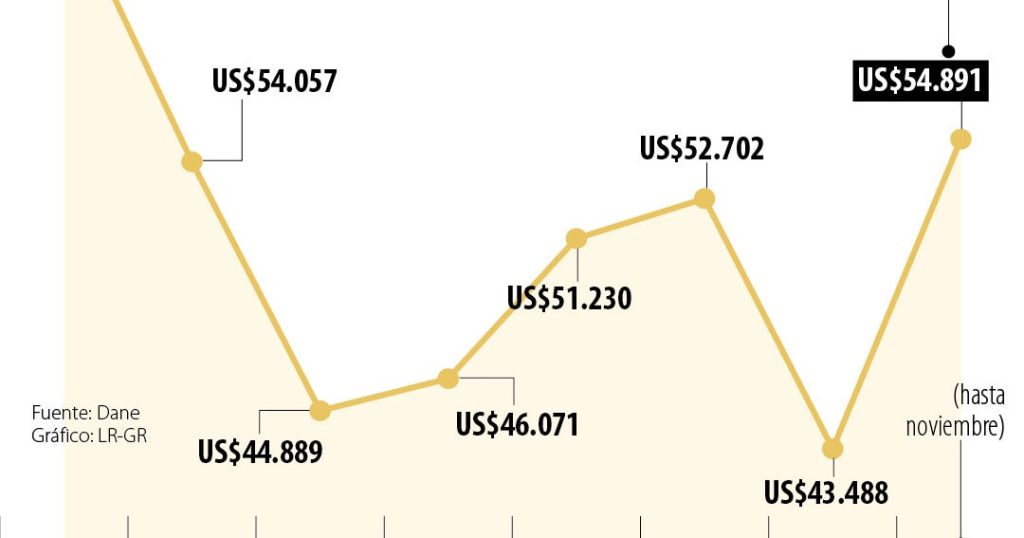 Imports totaled 6,545 million US dollars in November last year, which means an annual growth of 56.3%, one of the highest rates in recent years, according to the Department of National Statistics (Dane), backed by figures from Dian.

What was obtained in November is added to the rest of 2021 to obtain, at the present time, a total of 54,891 million US dollars, making it the year with the highest imports since 2014, when this number reached 64.028 million dollars. The Dane has not released data for December yet.

If you compare the months from January to November 2021 with those in 2020, there is evidence of 39.5% growth, driven primarily by the manufacturing sector, which had imports worth $42277 million over 11 months. This was followed by the agricultural sector, which includes food and beverages, where foreign purchases of these products in the same period amounted to $8,091 million. Finally, imports of fuels and extractive industries products were valued at US$4,445 million in these months.

The behavior of imports shows the recovery of the national productive apparatus. “This is indicative of the growth that the Colombian economy has achieved,” said Javier Diaz, president of Analyx.

In contrast, this deficit between January and November 2021 amounted to $14,324 million, which is an increase of more than 35% compared to the same period in 2020.

Martín Gustavo Ibarra, President of Experts in Foreign Trade Araujo Ibarra, explained that it is good that imports remain high, but that “the big challenge for Colombia is to be able to export more to maintain import levels. The great champions in international trade import a lot but they export more “.

The things we buy the most

The Danish company revealed in its report that China, for the first time, tops Colombia’s annual imports, surpassing the United States.

Despite the fact that the North American country ranked first in November, sharing 25.6% of the monthly total, in the year between January and November, China leads the rankings with 24%, one percentage point higher. from the United States.