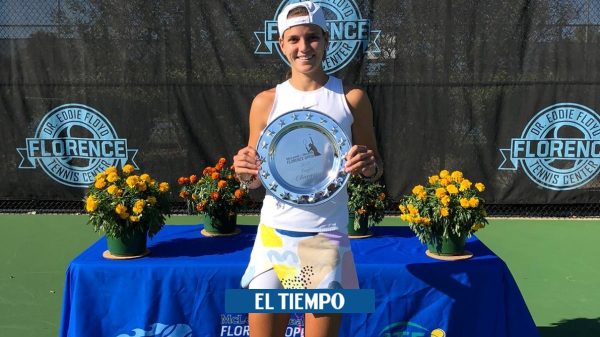 Colombian tennis player Emiliana Arango (Team Colsanitas) aims to be in the distinguished places in Women’s Tennis Association Sunday’s result shows he has all the capabilities to make it happen.

The Colombian recorded her name as W25 Florence Champion, on the US hard court, winning her third professional title, her second of the season.

It might interest you: (James has a lot of work ahead of Al Rayyan)

Arango will rise through the ranks

Arango, who this week ranked 304 in the world, managed to beat in the final the favorite main candidate of the tournament, China’s Xiyu Wang (137 in the world), 6-3, 0-6 and 7-6 (0) in more than Two and a half hours into the match, thus closing a week with six wins and only one set in the entire event.

Antiokinia managed to recover from a break in the final set to end up winning the match with plenty of power in the tiebreak, against a more experienced player who this year played 10 WTA Tour Championships and the Roland Garros playoffs. and Wimbledon.

The impressive level of the final was on display throughout the week, as you not only made it past the playoffs stage, but also beat the highly ranked players. Among them, she beat Japan’s Kurumi Nara, who was once 32nd in the world, and won a 250-level WTA trophy.

In this way, Arango will overcome the barrier of the top 300 in the WTA ranking, which will allow him to come close to being able to play the previous stages of the Grand Slam, tournaments in which he has not yet had a chance to debut.

For Alejandro Falla’s pupil, this is his third title as a professional and the second he has achieved this season. He first appeared on the winners list in 2017 when the W15 conquered Antalya, in Turkey, while last September he took home the W25 Medellín crown.

You may be interested: (This was Duvan Zapata’s goal against Empoli, it was already 100 in Italy)

Information from the press office