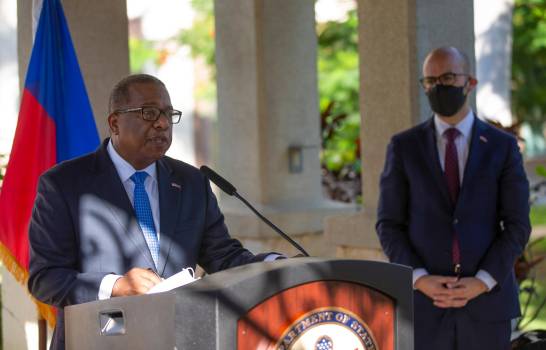 Puerto Principe. The US Under Secretary of State for Western Hemisphere Affairs, Brian Nichols, pledged Friday in Port-au-Prince that No solution will be imposed from Outside the political crisis in Haiti.

No externally imposed solution will work. The solutions to Haiti’s problems lie in Haitians and their vision. In the United States, we are committed to providing the necessary support to Haiti Nichols said at a news conference in Port-au-Prince.

At the press conference, Nichols also stated that the United States “I will not pick the winners in Haiti”, using the same words used in the resignation letter from the United States Special Envoy to Haiti, Daniel Foote, who left office last week criticizing Washington’s support for the plans being pushed by Ariel Henry.

Henry has negotiated a government agreement with several opposition parties, which is considering postponing elections to the end of 2022 and drafting a new constitution, which will be put to a vote early next year.

Nichols said the political plans are “decisions of the Haitian people” and stressed that Washington was not pressuring to speed up the elections.

We do not pay and do not expect elections this year. The transition must continue for as long as necessary to allow for an agreement that has the support of the majority of Haitian society,” the official said.

Biden’s envoys said they met with many political and civic actors and emphasized that there was “consensus” on the challenges he faces. Haiti He pointed out that “a part” of them also agreed on the solutions that would be adopted.

Haiti It has been mired in a serious political crisis since the assassination of President Jovenel Moise on July 7, a crisis that has been coupled with the instability caused by armed gangs and the devastating effects of the earthquake that caused extensive damage in the southern peninsula. . from the country.