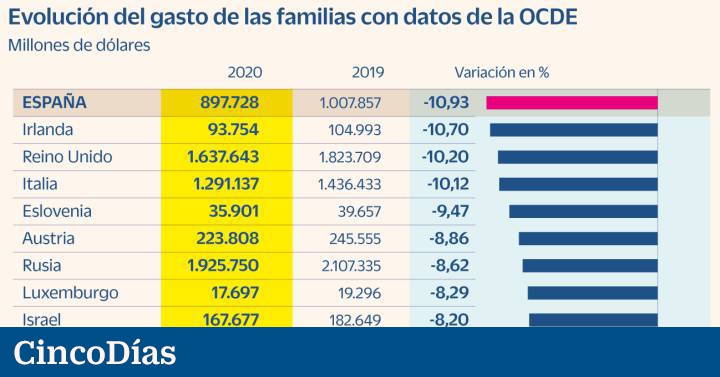 Spain was the developed country where the pandemic had the most impact on household spending. According to data from the Organization for Economic Co-operation and Development (OECD), consumption in Spain decreased by 10.9% during 2020, to $897,728 million (about €766,403.8 million at the current exchange rate). Thus, Spain was at the top of the OECD in the collapse of household spending due to the pandemic, closely followed by Ireland (which saw a decrease of 10.7%), and the United Kingdom (which saw a decrease of 10.2%). Italy (with 10.1% lower).

Although a decrease in household consumption was common in all countries that make up the OECD (with the exception of Denmark, Iceland and Turkey, which saw increases of 0.07%, 1.8% and 2.7%, respectively), Spain was very strong. Away from the average values ​​recorded for EU member states which fell by 6.5%, and the Eurozone where the decline was 7.3%.

In important neighboring countries, such as Germany and France, the recorded decreases were below these values, with a decrease in consumption of 5.6% in the German case, and 6.47% in the French case. Meanwhile, neighboring Portugal saw a 6% drop.

On the other hand, according to the data announced by the Organization for Economic Cooperation and Development itself at the beginning of this month, the income of Spanish households fell by 5.4% between the fourth quarter of 2019 and March of this year. Also in this criterion, Spain was at the top of the organization, after only Austria, where the decrease in money available to families was 10.1%.

See also  Special predictions "Summary of 2021 in the world"

In this way, although the analyzed periods are not completely comparable (because in one case only 2020 is taken into account and in the other case the first three months of 2021 are also taken into account), Spanish household spending fell twice (10.9 %) of income (5.4%) due to the pandemic.

The data on lower consumption provided by the Organization for Economic Co-operation and Development is slightly higher than that provided by the National Institute of Statistics in June, which indicated that average spending per household fell by 10.7% in 2020, to 26,996 euros, the lowest level in the last 15 year. This drop, recorded by the National Institute of Statistics, was the largest ever, more than double the 4.8% that occurred in 2009 due to the financial crisis.

The items in which families most reduced their consumption were restaurants and hotels, with 40.5% less; Leisure and culture 31.9%; in transport 29.5%; And in clothes and shoes, a decrease of 28.8%. The only two groups in which Spaniards increased their spending compared to 2019, despite much more moderate increases than the decreases just mentioned, were food and non-alcoholic beverages (6.8%) and housing (1.9%). In contrast, these latter two groups significantly increased their weight on total household expenditure. Thus, food accounted for 35.6% of household spending during the year the epidemic began, an increase of 4.4 points over the previous year; While housing accounts for 17% of the Spanish household budget, an increase of three points.

The National Institute of Statistics report indicates that the collapse of household spending during the months of the Great Deflation amounted to 28.2% to 16,793 euros. This figure was 81.8% lower than the average for the rest of 2020. Then, with the arrival of the so-called “new normal”, consumption rose again to 20,818 euros, 24% more than the confinement period. “However, this spending in the new normal was 13.7% lower than it was in the same period in 2019” explains the INE study.

up to 13.4%. According to data from the Household Budget Survey of the National Statistics Institute, the 40% of Spaniards with the greatest spending capacity were the ones who cut it the most during 2020. Thus, the quintile of the population that consumes the most (5), cut spending by 11.3% (about 6 ,044 euros), while the 4th quintile did so by 13.4%, saving 4,739 euros. On the contrary, the first quintile, those with a more modest family budget, were the part of society that reduced consumption by the least, 5.8%, about 827 euros.

household spending items. According to the National Institute of Statistics, 20% of those least able to consume set aside 66% of their budgets to pay for housing and food. For its part, the top five spends less than half of its budget (44.2%) to pay for these items. In contrast, this part of the population allocated approximately 28% of their budget to paying for transportation, entertainment and hospitality, while the most modest households allocated a little more than 10% of their budgets to this type of expenditure.