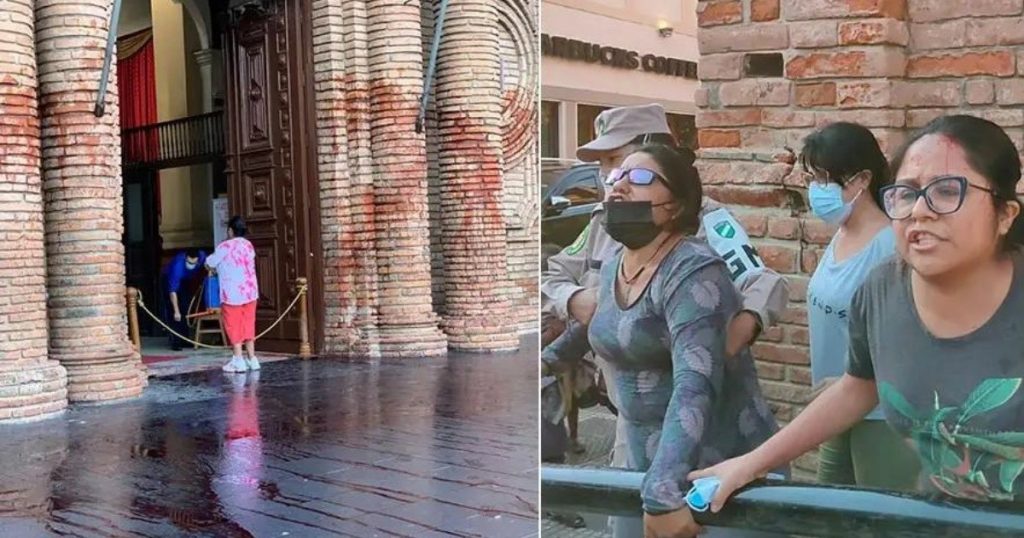 La Paz, Bolivia. – Indigenous women whipped a group of feminists they were Protest in the cathedral Minor Basilica of San Lorenzo Martire.

Watching the protests, indigenous women accused that the demonstration group came “With paint and banners to protest at the church door and they threw paint”, During the Eucharist headed by Sergio Gulberti.

“As we were in the first mass, no one reacted, we had to run and grab our lashes ‘to defend’ the church from what was going on”, a woman expressed to local media.

How did indigenous women remove the feminists from the cathedral?

With whip in handIndigenous feminists withdrew from the cathedral and warned.

That’s how we’re going to do it with all the people who are in control and want to do bad things…”.

Another woman from the group that kicked out the feminists said “With their blows they will respect our church. This is what our fathers taught us when we were young.”.

Why did the feminist collective protest in the cathedral?

Feminist Association “Mujeres Crendo” He was protesting in the Catholic Church in Bolivia over the issue An 11-year-old girl became pregnant after being raped multiple times by her 61-year-old grandmother.who was detained by the authorities.

What’s more Demonstration against the cathedral It happens after some institutions of the Bolivian government and the press, even the foreign press, denounced the intervention of the Church of Bolivia. So that the girl does not fall And continue the pregnancy, in addition to being transferred to a shelter.

Organizations such as the Office of the Ombudsman lobbied in vain for Abortion of the girlBut she and her mother refused.

The girl is pregnant at 21 weeks After he was discharged from the hospital, he was Transfer to a shelter From the administration of the Diocese of Santa Cruz de la Sierra, by decision of the Ombudsman for Children and Adolescents.

Victor Hugo Valda, Episcopal legate Health of the Diocese of Santa Cruz de la Sierra, She refuses the church’s interference in the girl’s decision, and ensures that “on the contrary, we show tangible affinity and support from the start”.