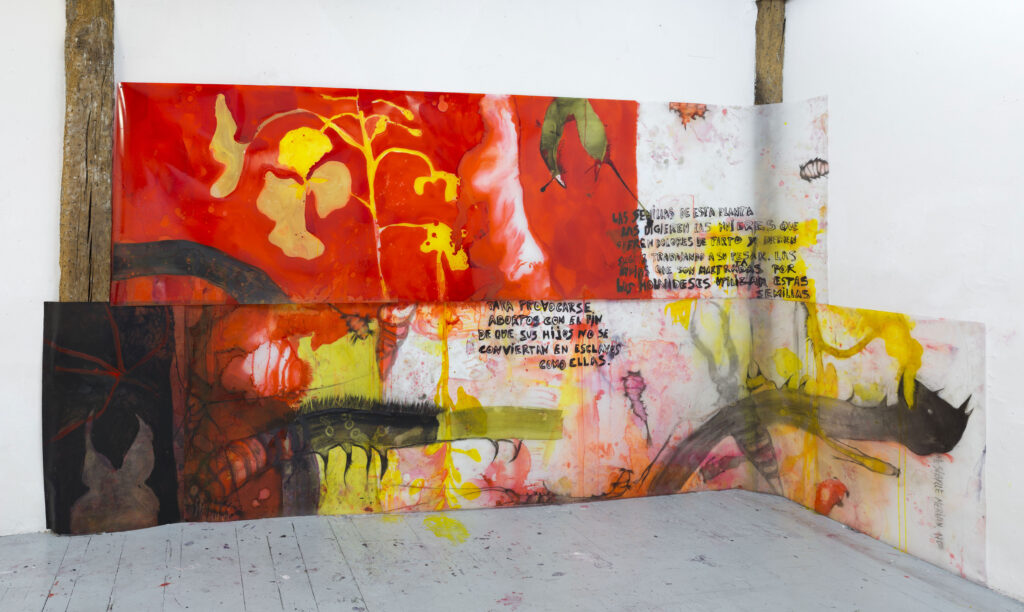 After being invited to enter the Red Planet, and while hosting a version of Kosmopolis with science fiction as the hero, Customs Cooperation Council Barcelona presents the exhibition “The Science of Friction. Life Among Companion Species “, showing that it proposes new ways of living in relation to nature and that, only by chance, it coincided with the epidemic and all its potential environmental impacts.

The origin of the exhibition lies in a hypothetical project developed by the French company Jeu de Paume in 2017 which is now expanded under the viewpoint of the curator of this exhibition, Maria Pettek, starting with a biocentric perspective, according to which all life on our planet (also literature or art) interconnected with respect to other species, and the theories of Lynn Margulis, the international standard in the field of biology, who died a decade ago. He formulated the principle of symbiosis, which asserted that a complex network of bacteria, viruses, and diverse organisms constituted every living body, including humans; Thus he questioned the principle of exception applied to people and linked it to Donna Haraway’s studies of the intersections between the humanities and sciences.

It is Haraway who plainly appealed to loosen the boundaries between the real and the imaginary when inventing, for pleasure, stories of the symbiosis of species, to invent worlds, because, according to his words, Only by imagining the possible future can we strengthen the task we have to do here and now. Those receptors must start from the knowledge of our symbiotic bonds with other organisms, not independent or independent; They will be stories about integrated ecosystems and species that change and cooperate, lacking organisms that serve our well-being.

The focus of the exhibition is that of a proposal for a definitive transition from anthropocentrism to biocentrism, embodied both in popular science pieces and works of art in very diverse formats: especially in immersive and sound installations and virtual reality projects, but also in avant-garde paintings, graphics and cinema.

The tour begins by recalling the character of Margulis, who researched our origin in bacteria and explained the history of life on Earth based on symbiosis, opposing neo-Darwinian current. His theories were illustrated by Christy Lyons, of which we will see in Barcelona drawings with animation by David Domingo, parts of a documentary by John Feldman about the contributions of a biologist and symbiotic life, Rive Holobiont جمعية Association Dominic Koch and various pieces by Petra Metz, including a crochet coral installation.

The second section delves into the concept of symbiosis and symbiosis, and refers to organisms that live together and also evolve together, based on their connections. Donna Haraway was baptized as Companion species الأنواع for insects and flowers as well as for humans, animals and plants, as a function of these close dependency relationships. An installation by Susanna Talayero will evoke the work of naturalist Maria Sibylla Merian, the first entomologist to document the links between these flowers and insects, and in the film bee’s wayBy Tony Serra and Abou Ali, we will be able to delve into the artisanal beekeeping techniques that are preserved in Morocco. Gustafson and Habuja, for their part, have brought to CCCB a strange story told from the cattle’s point of view.

Plangas and fungi occupy the center of the “tribiology”, merging with animals and bacteria creating dense exchange systems with them. If fungi contribute to the distribution of nutrients and the transformation of waste, then plants capture and provide us with the energy of the sun, perceive moisture, light and gravity and can have up to twenty senses.

We will be able to think, for the first time in our country, of the paintings by Dimas Paredes, associated with an Amazonian school of art; A virtual reality work that takes us inside a giant sequoia, by the Marshmallow Laser Feast or a bioelectronic communication device between fungi and humans designed by Sasa Spacal. Also documented is a display by which chlorophyll was transferred to a human, by Quimera Rosa, or one of the fixtures at Museo del Hongo showing symbiotic lichens and fungi.

Starting from this symbiosis, a fourth section of the exhibition invites us to reimagine the origins of the land and its inhabitants, and to reflect on the relationships between the spaces. Diana Tusido in audiovisual Camille and UlyssesHe created a dialogue between Haraway and Vinciane Despret based on fables about our relationship with butterflies or about the Mediterranean octopus. We’ll also see drawings by Louis Beck, one of the pioneers of speculative fiction in art and science.

The last section of the sample is titled natural contract It focuses on the intrinsic values ​​of plant and animal species and our duty to protect them. He advocates replacing the social contract, in which the environment is a passive being, with one that overcomes anthropocentrism: we will consider a moving map by Jaime Serra Palo on the evolution of the rights of nature, a video essay by Paulo Tavares on the incorporation of these rights into the Peruvian constitution and the intervention of Ernesto Casero : Post-human protests.

The Pompidou Center and Azcona Zentrua collaborated to organize “The Science of Friction”, where the exhibition will have another life afterwards.

See also  The Civic Center will provide space for a conference center.