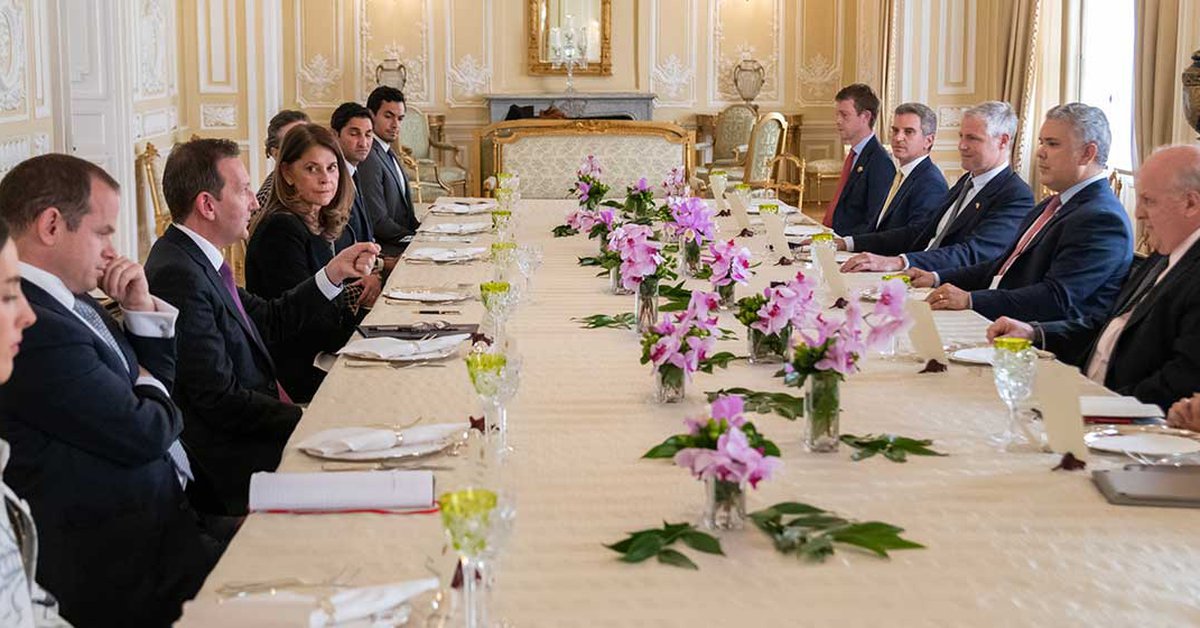 The meeting of President Ivan Duque and the United Kingdom’s Environment Minister, Lord Zack Goldsmith, with their work teams at Casa de Narino this Thursday.

President Ivan Duque highlighted the interests of the government this Thursday The United Kingdom will support environmental initiatives in Colombia with funding And thank the proposal to support the protection of environmental leaders in our country.

The head of state spoke on the matter at the end of the meeting, which he held with Britain’s Environment Minister, Lord Zack Goldsmith, at Casa de Narino With the aim of strengthening cooperation ties between the two countries, preventing the loss of biodiversity and addressing the effects of climate change with mitigation and adaptation actions.

The President said, “The United Kingdom is a leader in funding these strategies and is with Colombia with very significant resources in plans ranging from Colombian heritage, as it is called the Environment Program, and Amazon Vision, which is among the programs to protect 35% of this. One is our region, which, in turn, is 6% of that Amazon biome”.

Similarly, he highlighted the commitment of the United Kingdom to Colombia’s energy transformation, “where it is appreciated that in just three years and two months we have moved from there. One way to reach 0.2% of our energy matrix in non-conventional renewable energy Quickly over 20%”.

Similarly, he highlighted the support that UK wants to give Colombia In terms of clean mobility, which he said, “we have already exceeded the growth plan target in terms of electric vehicles running in our region.”

visit Colombian minister Goldsmith was agreed last month President Duke and the Prime Minister of the United Kingdom, Boris Johnson, during their meeting in New York in September, where they reaffirmed a bilateral alliance to combat climate change.

Colombia’s Ministry of the Environment announced that next Monday, October 11, it would carry out the Socialization of Climate Action Law project, which was presented to Congress, with which it would proceed in the implementation of measures to combat the effects of climate change. wants. Country.

Through a ‘webinar’ to be broadcast on the YouTube channel of The environmental portfolio, the main points of the document submitted by the national government, will be presented With the signing of eight ministers, with which it seeks to reduce greenhouse gas (GHG) emissions and strive to optimize communities and ecosystems to meet the country’s climate goals.

“Many of these actions will be developed, for example, for goals that we have such as 51% reduction in greenhouse gas emissions by 2030, zero deforestation by 2030, 30% protection of our marine and terrestrial areas, restoration of more than 960,000 hectares by 2030, a reduction of 11 million tonnes from mining and energy sectors. energy transitionEnvironment Minister Carlos Eduardo Correa said.

Organized by the national government under the leadership of the National Environmental System (SINA), this dissemination space intends to present the scope of this initiative which includes key strategies for Colombia to become a carbon neutral nation by the year 2050.

María Fernanda Cabal defends herself from the presence of Andrés Escobar at their meeting and attacks Petro: “You must be in prison.”
“For Those Who Say I’m Deflating”: Alejandro Gaviria Responds to Critics and Exposes Signature Records

From the “house of the future” to the underground cabin: these are the 10 most amazing accommodations in the world 4 min read