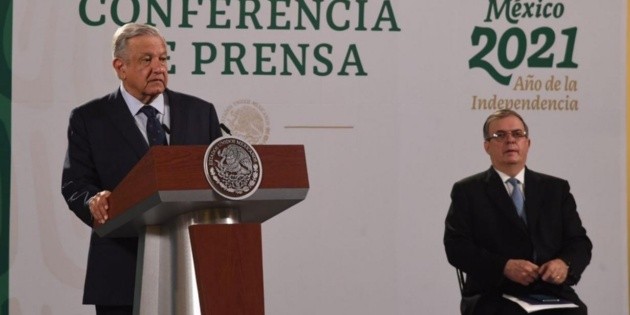 The Mexican government insisted on the United States (EU) should not finance civil organizations that interfere in the country’s internal politics, after a note White House Which prioritizes the support of NGOs, among other things, the fight against corruption.

“What Mexico is proposing is that organizations that receive funding from foreign governments should respect the internal political sphere,” said the head of external relations, Marcelo Ebrard.

The chief diplomat recalled the memorandum he sent on May 6 to the US Embassy She complains because she funds Mexicans against corruption and impunity (MCCI), an association that President Andres Manuel Lopez Obrador (AMLO) has called a “coup leader” and “opposition”.

Ebrard confirmed it Calling from the United States that they will continue to do so ONGIt is not an answer to the diplomatic note sent by the Mexican government regarding the funding Mexicans receive against corruption.

He stated that in the case of the MCCI, there are elements that prove his purposes of political activity or influencing public opinion in Mexico, which is why he submitted the complaint to that government.

See also  Nicaragua: After the raid on the opposition candidates, the regime of Daniel Ortega turned against the businessmen