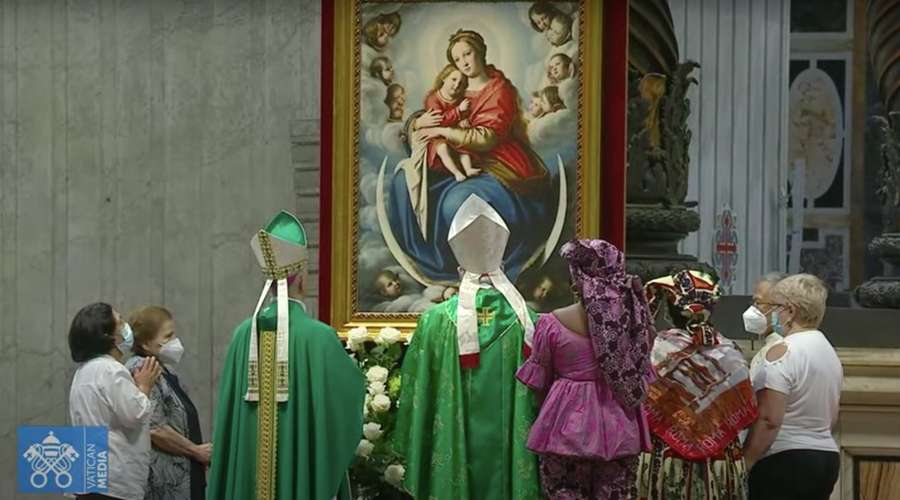 Pope Francis called on the World Day of Grandparents and Older Persons on July 25 to learn how to share time with the elderly, care for them with love, and be grateful for all they have done for us.

Brothers and sisters, grandparents and the elderly are the bread that nourishes our lives. We are grateful for their attentive eyes, which have brought us, upon their knees, who have given us, and their hands, who have accompanied and lifted us, played with us and played with us,” the Pope said in the homily prepared for the Mass, which took place in St. Peter’s Basilica in the Vatican and was attended by more than 2,000 believers.

The Eucharist was celebrated by the President of the Pontifical Council for the New Evangelization, Bishop Rino Fisichella, Governor of Dicastria for the Laity, Family and Life, Cardinal Kevin Farrell and Vicar of the Pope for the Archdiocese of Rome, Cardinal Angelo de Donatis.

In the A homily prepared by Pope Francis pronounced, On his behalf by Bishop FisichellaThe Holy Father commented on the passage from the Gospel of Saint John, which tells of the multiplication of loaves.

Along these lines, the pontiff wrote that “grandparents and old people are not remnants of life, excrement to be disposed of” but rather “the valuable pieces of bread that remained on the table of our lives, and which are still capable of nourishment. With the scent we have lost, the scent of memory.”

“Let us not lose the memory that old people carry, for we are the children of that history, and without roots we will wither. They guarded us throughout our growth, and now it is up to us to protect their lives, alleviate difficulties, attend to their needs, and create conditions so that their daily tasks are facilitated and they do not feel lonely ‘ called the Pope.

That is why the Holy Father called us to ask ourselves: “Have you visited the grandparents? To the family elders or my neighborhood? Did you hear them? Did you spend a little time on them?” He added, “Let us keep them safe, so that nothing is lost. Nothing about his life or his dreams. It depends on us, today, that we do not regret tomorrow that we did not pay enough attention to those who loved us and gave us life.”

“Please, let us not forget about them. Let us ally themselves with them. Let us learn to stop, recognize them, and listen to them. Let us never ignore them.” Let us guard them with love. And let’s learn to share time with them. We’ll get out better. He stressed that, together, young and old, we will be satisfied at the sharing table, God bless.

In addition, the Holy Father interrupts the story and characters told by Saint John the Evangelist in the sixth chapter where Jesus met a young man who had no name, who He gave all he had – five barley loaves and two fish – And the miracle of the multiplication of loaves, thanks to which many people ate.

In this sense, the Pope said that on this day, dedicated to grandparents and the elderly, he paused at three moments: “Jesus who sees the hunger of the multitudes. Jesus shares the bread. Jesus commands the collection of the remaining pieces. Three moments can be summed up Three verbs: See, share, guard”.

In the first place, the Holy Father highlighted “the gaze of Jesus, who is not indifferent or preoccupied, but warns against the bouts of hunger that torment weary mankind” because he “cares for us, cares for us, and wants to satisfy our hunger for life, love and happiness.”

“This is the look in which our grandparents and elders saw our lives. It is the way they took care of us since our childhood. Having often lived very sacrificed lives, they did not treat us indifferently or ignore us, but they had attentive eyes that were full of tenderness,” he emphasized.

See also  a woman trying to open the plane door while flying; They tied it with a ribbon to the seat

Then he called the Pope to ask “And we, What is our appearance towards grandparents and elders? When was the last time we kept company or called a senior to express our closeness and allow ourselves to be blessed by his words? She admitted, “I suffer when I see a society at work, busy and indifferent, occupied with so many things and unable to stop to look, greet, and caress.”

“I am afraid of a society in which we are all an unknown crowd and are unable to seek and know each other. The grandparents, who fed our lives, today are hungry for us, for our attention, for our tenderness, for our feeling of closeness. Let us look at them, as Jesus does with us. “, to caution.

Secondly, the Holy Father paused at the generosity of the young man “who shares what he has” and who “is at the center of this miracle of which many adults have benefited, about five thousand.”

In view of this, the Pope again called to do “A new alliance between young and old, to share the common treasure of life, and dream together, to overcome intergenerational struggles to prepare everyone’s future “because” without this alliance of life, dreams, and future, we risk dying of starvation, because broken relationships, loneliness, selfishness, and the forces of disintegration increase.”

“The Bible urges us to share who we are and what we have, for this is the only way we can be satisfied. I remembered many times what the prophet Joel said in this regard (cf. NS 3.1): Young and old alike. Young prophets of the future, who do not forget the history from which they came; Old people, never-tired dreamers who pass on the experience to the young, without blocking their way. Young and old, treasure of tradition and freshness of spirit. Young and old together. In society and the church: together,” the pope urged.

Finally, the Holy Father noted the importance of “the Bible says there were many pieces of bread left” and that Jesus asked to gather “the pieces left, so that nothing would be lost” and added that “a heart that God not only gives us more than we need, but also cares not Nothing is wasted, not even a part of it.”

It A prophetic call to Jesus, which reminds us that “grandparents and old people are not leftovers of life, waste to be disposed of” because they are “the valuable pieces of bread left on our life table”.

“Now it is up to us to protect their lives, ease their difficulties, attend to their needs, and create conditions that make their daily tasks easier and not feel lonely,” the Pope concluded.

At the end of the Mass, Cardinal Farrell and Bishop Fisichella stood in front of a painting of the Virgin Mary with a group of elderly people, among them two African women dressed in typical costumes, and they all sang, along with the assembly present. A song for the Virgin Mary.

The Holy Father held this International Day for Grandparents and Older People who It is held every year on the fourth Sunday of JulyNear the Feast of Saints Joaquin and Anna, grandparents of Jesus.

The theme of this first World Grandparents and Elderly Day was “I am with you every day” For this occasion, Pope Francis wrote a letter prepared also by the Department of the Laity, Family and Life Sentence. The apostolic prison is granted general indulgence For those who visit an elderly person for the day and adhere to the conditions set by the Catholic Church.