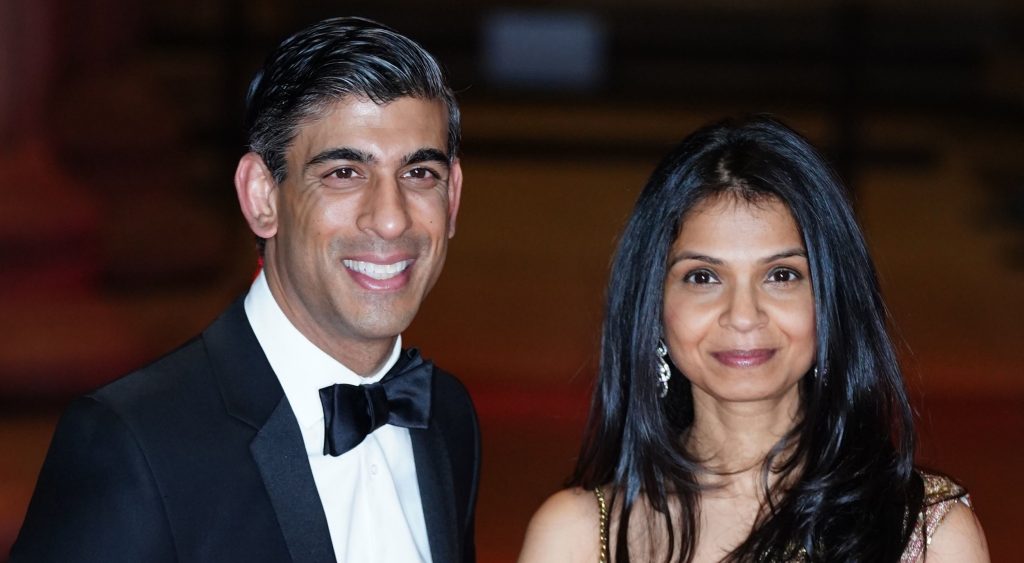 Akshata Murti, wife of Rishi Sunak, appeared outside the UK for tax purposes.

The chancellor has been married to Ms. Murti, daughter of an Indian tech billionaire, since 2009.

Here’s everything you need to know about your tax status and where your family builds up their wealth.

Who is Akshata Murti?

Mr. Morty and Mr. Sunak met while they were studying at Stanford University in the United States.

They married in Bangalore, India, in 2009 and moved from the US to the UK four years later, shortly before Sunak became an MP.

When she was young, her parents, NR Narayana Murthy and Sudha Murty, left her in the care of her grandparents to move to Mumbai to earn more money for the family.

She then studied Economics and French at Claremont McKenna Private College in California, transferred to Fashion Design and Merchandising in Los Angeles, and finally earned an MBA from Stanford University.

Her first job after Stanford was marketing director for the Dutch Technology Incubator Fund in San Francisco.

He launched his own fashion label, Akshata Designs, in 2007. However, the brand fell apart after a few years.

Murthy is the co-founder of Indian tech giant Infosys, of which his daughter owns nearly 1 per cent, and is believed to be worth around £700m.

Her family also has a £900m joint venture with Amazon in India, while Morty herself owns a venture capital firm in the UK and is a director or direct shareholder of five other UK businesses, including Jamie Oliver’s pizza restaurants.

She also owns London-based Catamaran Ventures UK along with Sunak, although he transferred his shares to it before becoming a Member of Parliament in 2015.

Why are you based outside the UK?

Mrs. Morty has lived in Britain for nine years, but is still based in India.

She never obtained British citizenship because it would force her to renounce her Indian citizenship.

Instead, it claims “non-resident” status in the UK, which can be claimed by anyone who was born abroad, or whose father was a foreigner, and who has lived in the UK for less than 15 years.

The chancellor informed the government about his wife’s tax status when he first became a minister four years ago, but it was only made public when he reported it. independent Wednesday.

Non-domestic status is only available to British residents who claim that their ‘home’, the center of their personal and financial interests, is outside the United Kingdom.

Most people claiming status must pay an annual tax of £30,000 and are taxed only on their UK income rather than all the money they earn worldwide.

Having a “non-resident” status is a relic of colonial-era British tax law. It was introduced to keep wealthy colonists who made their money abroad happy, as they were financially supporting the British Empire.

Ms Morty’s case means she will not have to pay UK tax on the £11.6m dividends she would have received from Infosys in the last financial year.

A spokeswoman for Ms. Murti said: “Akshata Murti is an Indian national, the country where her parents were born and her parents live. India does not allow its citizens to obtain citizenship of another country at the same time.

“Therefore, under UK law, Mrs. Morty is treated as a non-resident for UK tax purposes. She has always paid and will continue to pay UK tax on all her UK income.”

Labour’s Chancellor of the Exchequer, Tulip Siddik, said: “The chancellor has imposed one tax increase after another on the British people. Surprisingly, at the same time, his family benefited from tax-reduction schemes. This is another example of conservatives believing it’s a rule for them and another for everyone else.

“Rishi Sunak must now urgently explain how much he and his family have saved on their tax bill as millions of working families raise taxes and choose to leave them worse off by £2,620 a year.”

Nimesh Shah, CEO of accounting firm Blick Rothenberg, told The Times that Murty’s non-domestic situation is an option rather than an inevitable.

To do this, Ms. Murti would have to cut all ties with India, including giving up voting rights, selling assets and property.