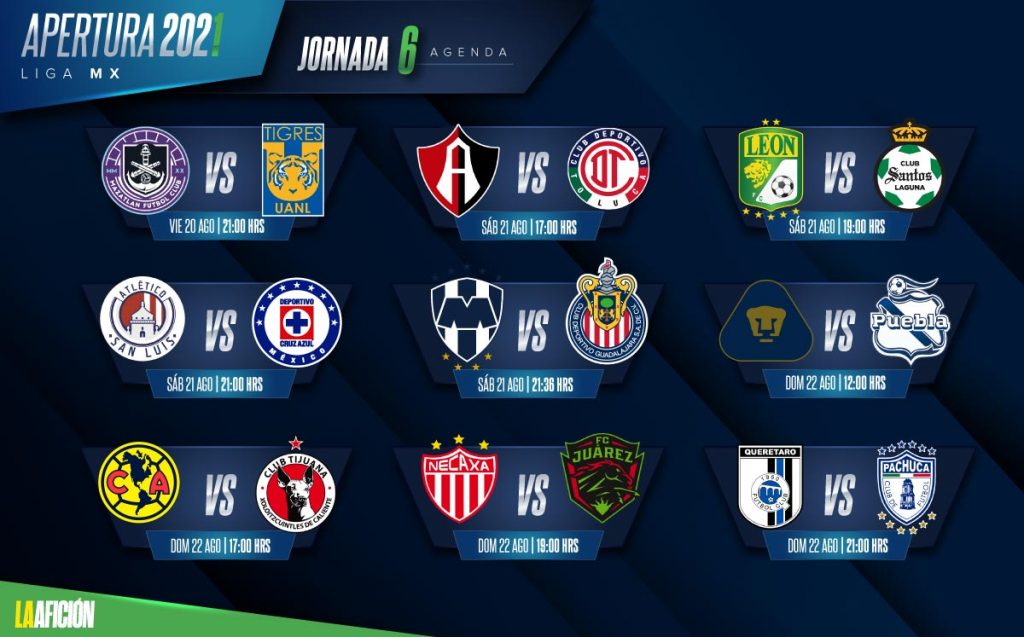 It starts this Friday Match day number 6 of Liga MX in the tournament Opening 2021By doing so, they complete the first third of the tournament and begin to decide who will be the leading clubs and who will fight at the bottom of the general table. Here we leave you Dates, times and where to watch live Move all the toys so they don’t lose track.

The day begins with a duel Mazatlan vs. Tigres in Culiacan on Friday at 9:00 p.m.; Saturday will be a day loaded with four matches, with the highlight of San Luis vs Cruz Azul, Monterrey vs Chivas At Akron Stadium, these games will be at 9:00 PM and 9:36 PM respectively.

for Sunday He urged Pumas to get a good result so as not to be late in the fight To return will take Puebla at CU Olympic at 12:00, later, and America will host Xolos de Tijuana at the Azteca Stadium 5:00 p.m.

Also close on Sundays are duels Necaxa – Juarez – Queretaro – Pachuca, which were agreed at 7:00 PM and 9:00 PM respectively.

Five go for their first victory

Of all the Liga MX teams, five don’t know what a victory in five days is, so this sixth date would be the perfect occasion to start adding three and leaving the last places off the overall table. They are: Puebla, Gallos Blancos, Xolos de Tijuana, Bravos de Juárez and Pumas de la UNAM, the latter being placed at the bottom of the rating.

Where to watch Day 6 matches in LIGA MX