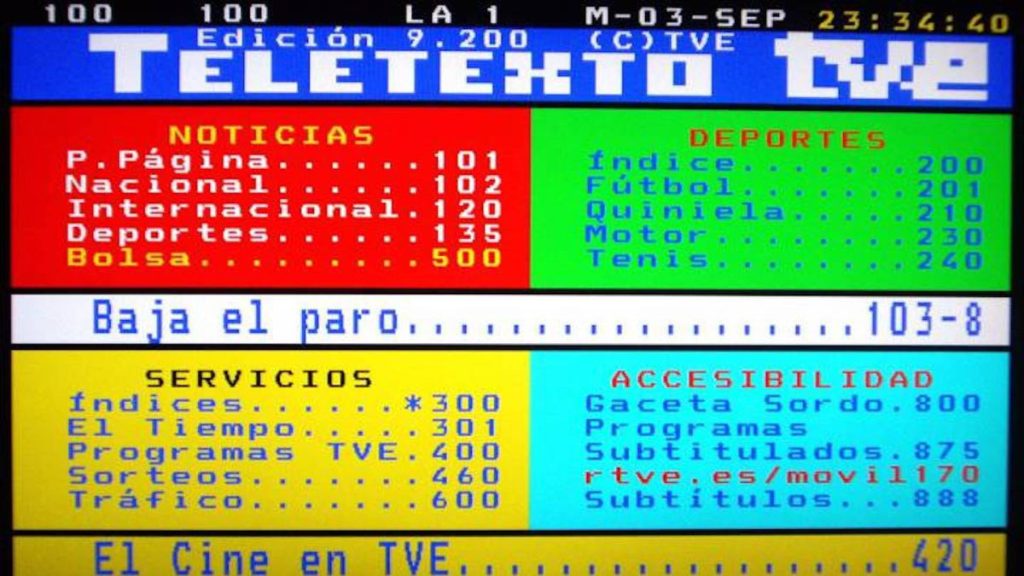 Check lottery results, see today’s news or Go to the sports section (in Spain from No. 200) To know the result of our football team Favorite, are some of the activities that many of us have done at some point with the legendary teletext.

The May 16, 1988 It was the date when this tool, created in England in the 70s, was applied in our country. “BBC” was the first chain in the British country to establish this system, which consists of A group of pages full of information and services to be selected through the remote control. To access any section, you type the page number, which is three digits, and after a while it is displayed on the TV screen.

It’s a system It was and still is free for everyone. Several years ago, it was necessary to have a teletext machine, or to pay a total of 15,000 pesetas for a decoder to be able to access it. “TVE” was the first channel in Spain to offer this service, and “Antena 3” was the last to integrate it in 1995.

For a long time, until the arrival of new technological developments, teletext was a file Very useful tool everyone since then It allows access to all kinds of information through the TV signal. From national, international and sports information, through weather information or horoscope. However, the integration of the Internet and the arrival of smartphones has led to its devaluation little by little.

With regard to the tales of the year of its implementation in Spain, In 1988 Real Madrid won the league. F.C.Bwho finished sixth with 39 points that season, He was the King’s Cup champion In the final match, which was held at the Santiago Bernabeu, in which they beat Real Sociedad with one goal from Alexanco. Paco Boyo won the Zamora Cup and Hugo Sanchez, the Picchi Cup.

Over 2 million people are reached every day

In the UK, the service was discontinued in 2012, while in Spain it is still valid. Its efficiency and nostalgia which caused many viewers from the fact that they are able to access it for reference to any kind of information, and keep it active.

The latest study conducted on the information channel revealed that a total of Two million people still get this service on a daily basis. At the same time, almost 100% of viewers still have televised scripts. A service used by more than 10 million people during the 1990s, or seven million people in 2011.