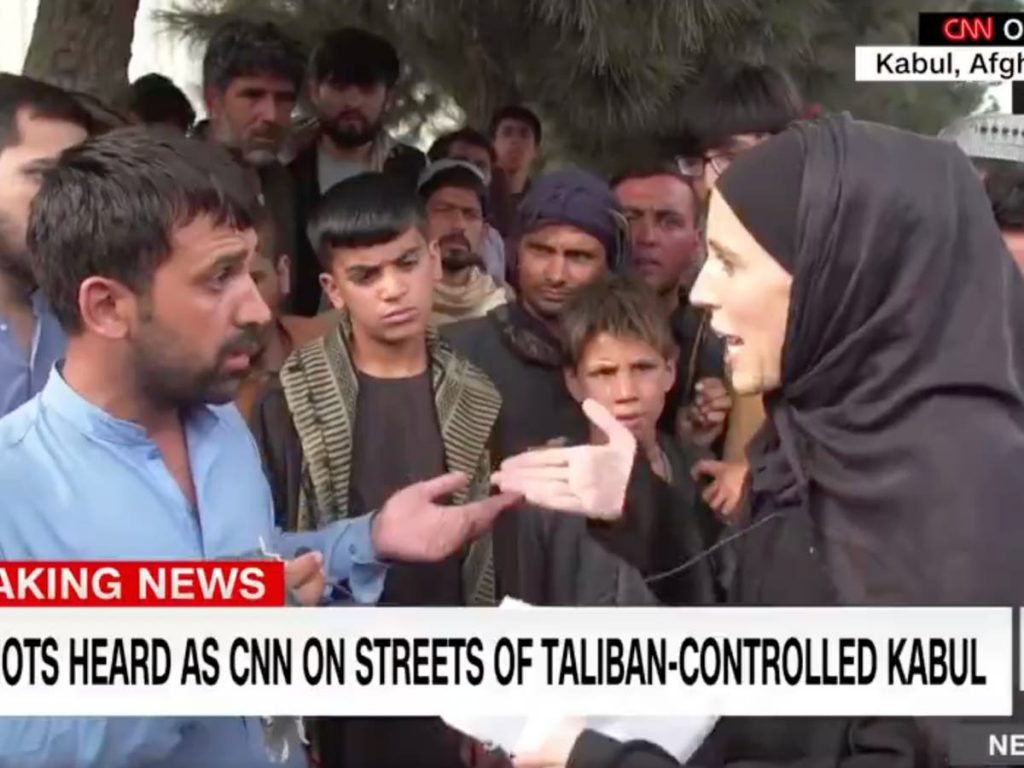 The difference between government officials’ rhetoric and the reality on the ground outside Kabul airport became apparent when CNN spoke to two Afghan men with US connections who are struggling to beat the Taliban to leave the country despite security guarantees. the passage.

International Correspondent Chief CNNClarissa Ward spoke with two Afghan men less than 200 yards from Kabul airport on Wednesday. Both men urged the United States to help them leave the country.

Ward said there was heavy vehicular traffic heading to the airport and the cars were “barely moving.”

“There are Taliban fighters everywhere,” he said.

“It looks like the Taliban are trying to disperse the protesters,” Ward said outside the airport, as shots rang out in the background, explaining that the youths were running toward the Taliban fighters and then quickly left “as if they were a game.” They shoot to disperse crowds, they don’t target people. They’re not trying to kill people, but of course the moment you shoot anyway when you have a group of civilians on the road and civilian vehicles, people get injured, that’s what happens.”

One of the men in the crowd surrounding a team CNN He told the station that “most of the people here” have worked with the Americans.

“We all have documents, recommendations, everything,” he added. “Joe Biden announces every day that we accept these men who work with Americans…but they are liars.”

The man described the difficulty of finding the correct documentation of his work with the US government and its contractors, and were told they needed an HR letter from this year even though they worked for a company that closed. continent.

“Our message to America, we are helping the American people, so this is your job to help now, right here here. It’s a very bad situation: if the Taliban find out you worked for a soldier, they take you to…jail.”

Another man showed up to show a picture of his US green card on his phone CNN.

“I have flights on August 20, this Friday,” he said, adding that he had already filled out an application at the US embassy, ​​which was evacuated at the weekend. The man also appeared to show emails he had received from the US embassy.

When trying to enter the airport, he said the Taliban apparently lied, telling him there were no flights, despite his documents.

“They don’t know anything,” said the man. CNN.

“We are helping the United States, and now they have to help us,” one person said.

“The Taliban have told us they are prepared to provide safe passage for civilians to the airport and we intend to keep them on that commitment,” National Security Adviser Jake Sullivan said on Tuesday.

“We think this could continue into the 31st. We’re talking to them about the exact timeline for how all of this might happen and I don’t want to negotiate publicly about the best way to get as many people as possible in the most efficient way possible,” Sullivan said.

But the State Department issued a security alert on Wednesday, saying the US government “cannot guarantee safe passage to Hamid Karzai International Airport”.

“Please note that a large number of people have checked in and that space is available on these flights on a first-come-first-served basis. You may have to wait at the airport for an extended period of time, until space becomes available,” the management added.

“The security situation in Kabul continues to change rapidly, including at the airport,” the statement said. “Do not travel to the airport until you have been notified by email that there are options for departure.”

The Chairman of the Joint Chiefs of Staff, General Mark Milley, said during a press conference on Wednesday afternoon that security at the airport is stable and that the Taliban are not interfering with the American evacuation efforts. He added that 5,000 people have been evacuated in the past 24 hours and that the Ministry of Foreign Affairs is working to increase the number of people available for evacuation. The president added that the US military treats about 500 people per hour at the airport.

During the same press conference, Defense Secretary Lloyd Austin was asked what the US military can do for Americans who do not have access to the airport. “We don’t have the ability to go out to pick up a large number of people,” he said.

“I don’t have the ability to go out and expand operations to Kabul right now,” he added when pressured by journalists.