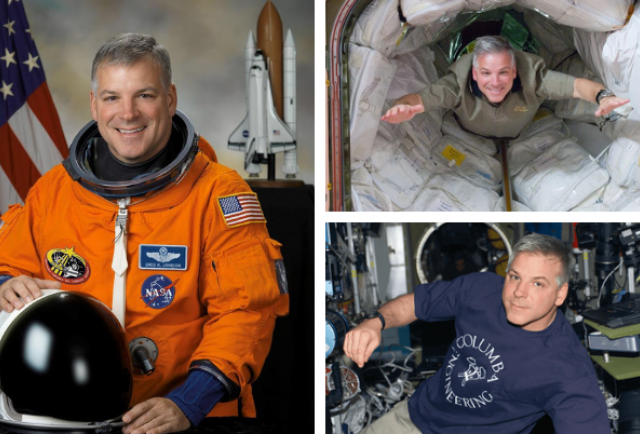 Gregory Harold “Box” Johnson, 59, is a retired NASA astronaut and colonel United States Air Force. He is a veteran of two spaceflights: STS-123 and STS-134. He served as a pilot on his first mission, which delivered the Kibo logistics module and Dextre robotic arm to the International Space Station. He was also assigned as a pilot for the STS-134 mission. Currently, Gregory is the President and CEO of the Center for the Advancement of Science in Space (CASIS). He spoke with EXPRESO about his experiences in space, the opportunities for new civilian astronauts and the geographic opportunities that Ecuador has to build a space training center.

According to NASA, a large asteroid could collide with Earth starting in the year 2135

The most unexpected idea was that our planet is beautiful. When you get to space and look at planet Earth, it’s more beautiful than any photo or video you’ve ever seen. When you see Earth as a global entity, you see everyone together solving problems, fighting, coexisting together… We live in a beautiful spaceship, the Earth’s spacecraft. When you look at the atmosphere, you realize that it’s a very thin cup of 200,000 feet thick, depending on where you are and everyone on the planet gets all of their breath from that thin layer of air. It happens to all astronauts, and only there we understand how important it is to take care of the wonderful place we have inherited and take care of each other. It is a spiritual experience that moves you.

– What are the most difficult moments for a person from Earth?

The biggest difficulty was the isolation from our normal lives, my family, my co-workers, and my routine. Professionally there was a lot of pressure with the world looking at us as we didn’t want to make mistakes. The equipment and experiences we used in Space ship and the IS They have represented many jobs for people on earth who have counted on us to make everything go well. So there was a little pressure, I remember my first flight was robotic arm operator and led Alpha Magnetic Spectrometer It was a US$2 billion project from a consortium of 15 countries and the principal investigator was awarded a Nobel Prize for his research work. This was serious and we didn’t want him to go wrong. So when we install it on a file IS And it worked, we all felt very relieved.

How has life changed in this space world? Have time and technology made it easier, or are the challenges the same?

In my time I managed to be astronautHowever, given the current circumstances and the presence of several excellent candidates to be one of the candidates, I think it would not have been possible now. Technology has always been a key ally of space missionsEspecially for communication. And now it will play an even more important role in meeting the next near-challenge: placing a space station near the moon.

Plus, in the spatial domain, everyone has their eyes Mars. While it is true that the opportunities for space travel today are excellent, the first astronauts to go to red planet They will be presented with a new series of important challenges where the topic of communication will be more complex due to distances. That is, the astronaut is able to communicate Mission control On Mars, it would take a few minutes longer than it would the Moon or the International Space Station. Then the astronauts who go there will have to prepare several alternative plans and be more independent in their missions because they will not be able to rely on real-time support from the city’s control offices. a land.

It is very important to meet the challenge of acquiring space. NS Ecuador It can play an important role in cooperation, since international cooperation is required because production costs are high and projects are very complex. So, it is important that countries like Ecuador get involved. space nation, the organization I’m in right now, promotes the universality of human access to space.

What do you think are the challenges of the future, both at the level of government agencies and with regard to commercial travel?

to me government agencies What is important is the political issue, because the processes are very long, but the political visions are short-term, and an attempt must be made to reconcile them. There are politicians with short-term visions, and others with long-term visions.

In addition, it is important that the inconveniences that occur daily do not affect exploration plansBut really thinking about the future in an objective way.

regarding Business tripsIt must be understood that it involves high risks and high investments, so governments should play a very important role in this type of undertaking, helping to reduce risks to a minimum. Relationships within the private sector are also crucial. You have to think that it’s not about competition, it’s about cooperating to achieve a great goal.

Puerto Rico makes history by entering the world of satellites

– What is the Space Nation Initiative on Leviathan?

A Memorandum of Understanding (MDE, or MOU for short) has been signed which in this case helps us with what we do: Training missions The simulations are in landscapes that look like from another planet. The idea is to search for those places in Ecuador and in other Latin American countries. So, leviathan areas It cooperates so that Ecuador, through it, becomes a destination for this type of training.

Additionally, taking into account the current context of pandemicWe work with Virtual training courses And teach astronauts to be able to provide service in a more practical way. We are also looking for alliances with educational and research centers to be able to develop participatory projects with a spatial theme.

– How to be part of the project and who can be part?

across the Web page You can access to become a member to participate in the virtual space port where you can start the programs. This is open from now on.

Opportunity for educational topics, collaboration and to get that international perspective in the training it offers you space nation It is a key.

– Have you had talks with the local authorities?

in 2019 (Leviathan) We managed to get a delegation from Guayaquil to travel to Houston to learn about aviation sector And all the opportunities that exist. Coordination was made with the municipality and various people from the public and private sectors went to the largest space fair in the world to be held in that North American city.

Also to visit local universities and strengthen relations with those institutions and Innovation Centers. The good thing is that all you do in space technology is get close to other ecosystems and be able to see ways to collaborate.

the pandemic The initiative slowed down a bit. Now we are waiting to be able to dialogue with the new government in more detail in order to promote this kind of initiative. So what we’re doing during this transition period is working with different local special agents to promote this alliance.

– What do you think of Ecuador? Do you consider that there is a possibility here for the issue of space travel and the implementation of research projects?

That geographical diversity Ecuador It offers with its volcanoes, sandy areas, forests, access to the sea and different climates, it is really an exciting opportunity to do a training of this kind in such a small country that you can access everything that is set very quickly.

All this is very conducive to space nation To be successful in terms of space training installation here in Ecuador and local and foreign people can come to do it.