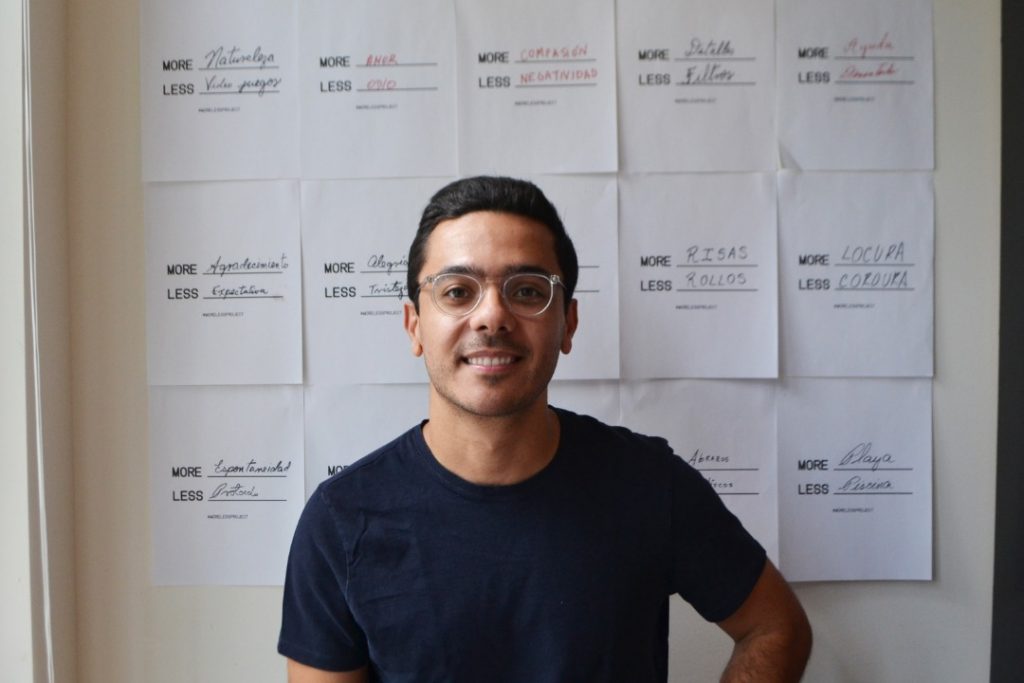 Project More Less is a public participatory art initiative first set up in August 2019 in California that provides a space for reflection on the values ​​and desires of participants; It is an invitation to consider the valuable things in their lives because of the impact these choices have on them. The dynamic is a conversation board between designers, artists and creative entrepreneurs, and then the community can come together in a space for discussion about the distant last year.

The next session will take place on Thursday 25 February and will include a committee composed of comedian, screenwriter and activist Ricardo Del Buffalo (Caracas); Founder of Tiny Rockets Orlando Osorio (CDMX); “Become Yourself” podcast host Francisco Hernandez (CDMX); Artist and illustrator Adrianana Alvedi (Bogotá) and founder of Adhesivo Magazine, Edith Vaisberg (CMDX). This will be the first time this project has opened a course aimed at the Venezuelan audience, in addition, it will have a second date in English, on Friday the 26th.

The event will focus on trying to discover how to engage with the new world, or how to adapt to it. The aim of this conversation and workshop will be to create a space for societal thinking and talking about the things we think, feel, and understand in the middle of one year of remote work. In the words of Stumpo, “This event is important because art transcends the two-dimensional context and we use it to communicate, create community and create spaces for reflection.”

More Less Project is an initiative of Francesco Stumpo, a multidisciplinary designer and visual artist graduated from the Wentworth Institute of Technology in Boston, who holds a master’s degree in architecture and has worked throughout his life – since his beginnings in Venezuela – with clients such as Standford, Linked In, Google and Facebook. Youtube and others.

Prior to this release, # MoreLessProject: Remote Edition, was presented in San Francisco as a physical installation in the Mission District, as was the case for the other two February 2020 individual visual art exhibitions “Croquis Bloque” at Atlas Café and “Puentes Fronteras”, San Francisco Center Zine. His work has sold in the past two years in the United States, Mexico, and Canada, and has forged alliances with art nongovernmental organization ArtSpan and unique item buying platform, Wescover.
See also  This was the grandfather of crocodiles

Stumpo’s artistic practice and work explores the abstract sense of lines as the primary driver of connections and distances. In the words of curator Isabel Delgado: “Upon entering into a dialogue with Francesco’s pieces, the viewer finds himself in front of an alphabet where the lines create new symbols of truths moving from the known to the unknown, from the straight to the basic, from the void to the complete, and reconsidering other subtle perspectives. “.

In doing so, the work combines architectural qualities, cartography, graphic and minimalist languages, with a multi-account approach at the intersection of vibrant monochrome and occasional primary paintings. It is inspired by city infrastructures, geography and landscapes, the space between people and the built environment, with these experiences depicted in various media and settings. Curator Jes Bernalette Tua concludes, “It is in our hands to use emotions and ideas to reformulate the new map of life and art.”