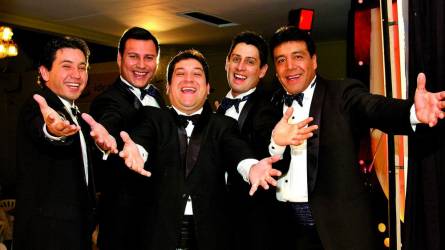 In 2002, Ronald Federico Avila decided to use his nickname to baptize the initiative of a new Bolivian coffee party: the Fico Show. Now, 20 years later, the cast has caused laughs from their native Cochabamba to stages in cities in the United States and other countries.

But it’s not just his group that is celebrating. Fico Ávila himself celebrates 30 years of professional dedication to comedy, when he entered the ranks of Tra la la full time.

The Fico Show was born on June 14, 2002. He applied the style of humor that unites the café party with the musical show that was born thanks to Peter Travesí, founder of Tra la la. But she quickly establishes an identity of her own by making people laugh.

“The truth is that at first we didn’t think we would get where we are now. We were a group of friends who went on an adventure. We were working to be able to distinguish ourselves and establish our own style. I think it went well for us,” says the comedian from Cochabamba. .

And it must be celebrated by throwing the house out the window. Although the comedian was reluctant to come forward about a show that would celebrate 20 years of actors, he was more open when announcing a tour that would take them across much of the national territory and onto stages in various cities in the United States and Canada.

“It couldn’t be in a different way. When we started, we decided that everything we do would be of high quality. We work hard to get our audience laughing and moving. We wanted to put on a show that not only works the facial muscles, but activates the brain,” he added.

A huge success for someone who did not intend to devote himself to professional presentation. In fact, he pursued a profession rarely associated with the stage: industrial engineering.

However, the creative seeds were sown in childhood. Avila was born into a family with strong artistic inclinations. His father, Jorge Avila, played the guitar, his grandfather played the organ in the cathedral, and his grandmother the ukulele. With such influences, it is not surprising that he started singing at a very young age.

“I have always had a passion for music. When I was in school I devoted myself to playing guitar. I can tell that he then strived hard to play at birthday parties in Cochabamba. Even my entry into the theater was because of my ability as a singer before my acting skills.”

That opportunity came in 1992. Cast: Tra la la. Little by little, his colleagues realized his ability to improvise and make use of funny texts. “I started with small roles. Seeing that it worked, they gave me more important parts.”

It wasn’t easy. At the time, Avila balanced his college education with presentations and tours. “We traveled a lot with the actors, it was very difficult for me to finish my studies in industrial engineering, but I did,” he said proudly.

However, the pace of life was stressful. This prompted him to withdraw from the cast in search of some initiative of his own.

And comedy caught him again. Together with his wife, Janine Travisi, they decided to found the Fico Show. The premiere was called Que Viva la Risa and it really presented the special characteristics of the actors: the fusion of music and dance with funny numbers.

We want the eyes to be filled with colour, movement and shapes. We don’t want to be one-dimensional, we just want to be recognized for a particular topic. We don’t have a single line of business.”

The artist always emphasizes that the longevity of the actors and their victory is due to the unity of the team. He noted that in their 20s, they had only had to organize tests for organ replacement three times.

“We are a family more than just a working group. We constantly work as a team, from the idea of ​​the shows to the final preparations. I think I can assure you, without fear of making mistakes, that we are one of the most stable personalities in the country,” he said.

Currently, the team consists of 20 people, including actors and dancers. All of them are involved in the various stages of production of show figures.

There are no number of first-time shows per year. Avila emphasizes that one’s duration at the box office depends a lot on the reaction of the audience, if they wish, it lasts longer.

However, the basic length of the cycle is estimated to be between seven and nine months. In cases of big hits, it’s not uncommon for actors to rerun the same show for a year or more.

Contrary to what it might seem, Fico’s Show does not have a fixed theme. Each show consists of a set of ideas that tickle the different preferences of Bolivians.

Yes, Fico is the first to admit that politics plays a dominant role in jokes. But, at the same time, jokes referring to national costumbrismo are being worked on; He loves the stars and they break them. Those who are into fashion – five years ago their space opened with a proposal referring to the Game of Thrones series – and turn existing problems into something joyful.

He considers that “Vico’s show is an expression of a social moment, an idea of ​​a city that provides us with everything we need to do comedy.” This is because every city in the country is laughing at something different.

For example, stress that the main path in the seat of government is usually politics. “In La Paz they like to parody and criticize rulers or opposition parties.”

He admits that she can get “a bit acidic” when it comes to talking about these types of personalities and situations.

“It is not our fault that the same politicians are our ideal screenwriters. The comedian added that they themselves demand to be represented by their words and the events that appear in the media.

In Santa Cruz, there is a preference for humor that recalls local customs, ironies about the different idiosyncrasies of each region. While in Cochabamba, he is a mixture of both styles, but with requirements in musical numbers.

Current issues are also touched upon, such as the trial between Johnny Depp and Amber Heard.

Of course, nothing personal. Humor is done without political overtones and less personal cues. Something that is not always appreciated by those referred to.

Something has increased in recent years. Avila considers the work to be increasingly difficult, because a comedy can evoke many sensibilities, both in the audience and in public figures.

“A lot of people don’t seem to understand that something is humor rather than a description of reality, nor does it represent one’s opinion of a person. In addition, there are things that you can no longer seem to touch. I hope it won’t, but it will only be Normal if at some point we had to make jokes about Mars so as not to offend anyone.” But despite those problems, the show continues. Avila assumes that in these 20 years nothing has stopped Fico’s Show work, outside of quarantine. That was just a temporary hiatus.

Currently, the cast is working from their homes. In 2017, the Atrezzo Center was opened in the capital of Valona. This space is not only used for local presentations, but is also enabled for other projects by actors and outdoor activities, such as concerts by stars from abroad, such as Argentine Neto Mestre.

Among his future plans is the resumption of exclusive shows for children. “We are a family business team, but we worked with specific offerings for the youngest members of the family and the elderly. Everyone will have their own space.