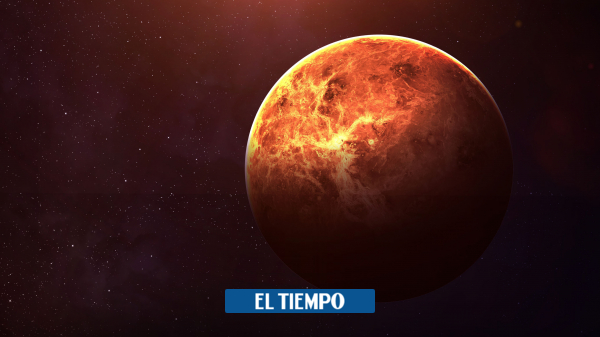 About the night weather Venus Little is known, because the lack of sunlight makes photography difficult, but from scientists now Japanese mission Akatsuki Identified a new method capable of revealing the first climate secrets from a night From our closest neighbours.

(May interest you: two new galaxies discovered by the Hubble telescope)

This is the first time researchers have been able to observe high clouds on both sides of the planet at the same time, day and night, and globally. The results are published in the journal nature, in an article also signed by the Spaniard Javier Peralta.

tropical climate Akatsuki Venus Launched in 2010, its mission is to observe Venus and study its meteorology using a series of onboard instruments, some with infrared sensors to reveal details of the nighttime weather of the solar system’s warmest planet.

Studying the atmosphere of Venus can help to better understand Earth’s climate, the University of Tokyo recalls in a statement, which is why researchers need to analyze the motion of clouds on the planet both during the day and at night. Infrared wavelengths.

However, until now you could easily study the weather during the day only by observing the clouds when illuminated by the sun. Previously, you could make some infrared observations of the night side, but they were too limited to have a clear idea of ​​the general climate on Venus.”

(Also: Mars: What color are blue eyes on this planet?)

Namely, Venus is a special case, as its atmosphere rotates up to 60 times faster than the planet, therefore, to conduct its analysis and study the slow air movements between north and south, the team had to compensate for the rapid movement that occurs from east to west known as the super-spin in Atmosphere.

To do this, Kiichi Fukuya, lead author of the work, devised a method for manipulating and enhancing the LIR thermal images on board the spacecraft to monitor Venus’ high clouds and their movements.

In their observations, something surprising was discovered. In contrast to what has always been seen on the day side, with winds from the equator towards the poles, the opposite occurs on the night side and winds traveling from the poles towards the equator prevail.

“We can finally notice the winds coming from north to south, known as the southern circulation, at night. The surprising thing is that they travel in the opposite direction to their daytime counterparts,” Imamura says. This could solve, he notes, “some long-unanswered questions about the climate of Venus, and perhaps also about the terrestrial climate.”

In this sense, Peralta remembers that one of the biggest concerns today is what will happen on Earth as the greenhouse effect increases and climate change accelerates.

(Plus: This was Bezos’ round trip into space in 10 minutes)

Earth and Venus were born “twin planets” but they evolved very differently: the effect of global warming on Venus so that their seas evaporated, turning it into an inferno of over 450 degrees. “For this reason, Venus and its extreme conditions can give us clues about what could happen on our planet and how to avoid it,” this researcher, who worked with Japan’s space agency Jaxa, tells Efe.

Peralta asserts that only these images allow us to see clouds on both sides of the day and night at the same time, and says the discovery that winds behave differently on both sides is “amazing.”

“It contradicts the classic view on Venus of a southerly rotation of the ‘Hadley’ type, where south winds in overhead clouds are also expected to be poleward on the night side.” “The results confirm that solar tides (planetary waves generated in the atmosphere by solar heating) are the only drivers that maintain Venus’ strong winds,” which can reach 350 kilometers per hour.