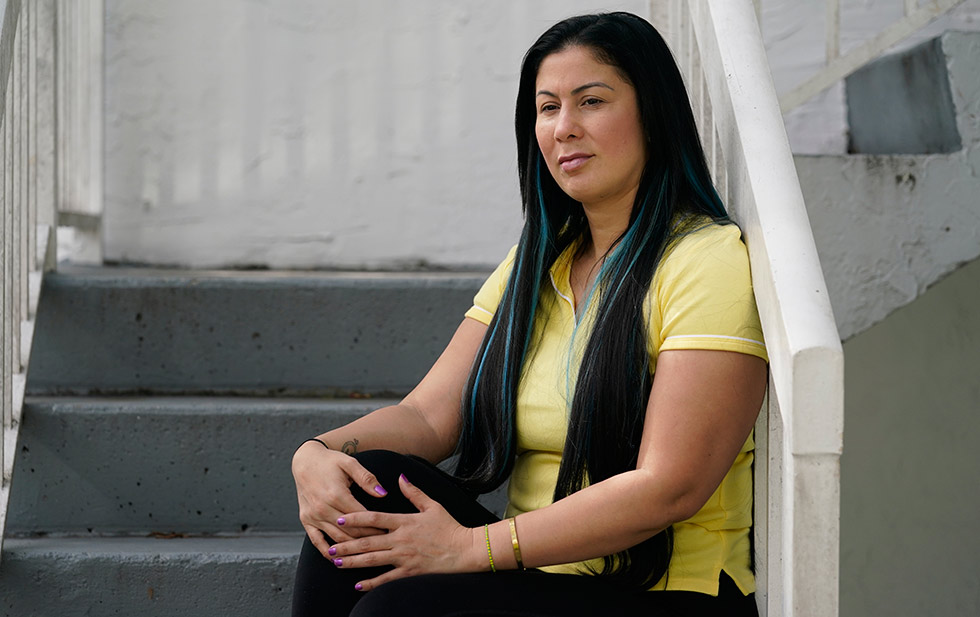 Miami – Maria Ortiz left Venezuela four years ago, when she realized that job opportunities were almost non-existent. After graduating from college with a degree in petroleum engineering, she hopped on a plane and replaced her dream of a professional job for a better quality of life in America.

Since then, Ortiz has worked in restaurant kitchens in Maryland, earning enough money to raise her two-year-old daughter and support herself during the coronavirus pandemic. Their lives could change dramatically this year after President Joe Biden’s government decided to offer temporary protection status to hundreds of thousands of Venezuelans who have fled the humanitarian crisis facing the South American country.

“I am very pleased to know that I will have legal stability, and that I will have the opportunity to choose a good job,” said Ortiz, who hopes to find a job where he can apply his engineering knowledge. The 25-year-old said, “I’m here because they won’t take me out of the country. This feeling of comfort in knowing that I will be really safe is causing me great emotions.”

The US government announced Monday that it will grant temporary protection status – known as TPS by its English name – to Venezuelans already in the country. The procedure will last for 18 months and will reach about 320 thousand people, who will be able to request permission to live legally in the country and work.

Immigrants, activists and lawmakers from both parties have embraced the TPS system for Venezuelans, which former President Donald Trump refused to grant, including some who have introduced similar bills in Congress.

See also  For a manatee with the word "Trump" on the skin, an investigation was opened

In order to qualify, individuals must demonstrate that they have lived in the United States since before March 9 and pass a criminal background check. Those who can apply for TPS include people who remain in the asylum process as well as those who have been denied asylum but who still live in the United States.

Venezuela is mired in a deep political, social and economic crisis attributed to low oil prices and two decades of bad management by socialist governments. Millions of people live in poverty, amid shortages of food and medicine, low wages and four-digit inflation.

This situation means that about five million Venezuelans have fled to other regions, most of them to Colombia and other Latin American countries. In the United States, most of them live in South Florida.

Many of those who have come to the United States have applied for asylum, but after fleeing a humanitarian crisis it is not certain that they will automatically get it. Michael Kagan, a law professor and director of the Immigration Clinic at the University of Nevada in Las Vegas, said that more than 50% of Venezuelan asylum applications have been rejected in recent years.

“As long as they don’t have a serious criminal record, it’s a very easy application,” Kagan said, referring to the TPS program. “I say almost all of them will be approved.”

Human Rights Watch on Tuesday asked the Biden government to extend the TPS to include Venezuelans who have sought asylum and have been sent to Mexico to wait for their cases to be processed under the Immigrant Protection Protocols – or MPP – promoted by Trump.

Human Rights Defenders said about 2,700 Venezuelans are in the situation.

“The Biden administration should end expulsions at the US border and make an exception to the physical presence requirement of the temporary protection system so that Venezuelan asylum seekers who have been denied entry to the United States are also eligible.” Bill Frelick, Director, Refugee and Immigrant Group. Region, in a written statement.

Gustavo Acosta celebrated out loud at his home in Queens, New York, when he learned that the Biden government had ordered the TPS. He arrived in the US in March 2019. After crossing the border with Mexico illegally, he turned himself in to the authorities in the port of Tijuana and was detained for 13 months. He applied for asylum, but was rejected and ordered to be deported. Then they let him out with supervised freedom until he was finished with his repatriation.

“It helps us and gives us great comfort,” said Acosta, a Venezuelan designer who fled his country to escape the humanitarian crisis, oppression and crime. “I can breathe a little easier … I was very afraid of deportation.”

With TPS he hopes he can get a job that will allow him to support himself. Presently, he lives in a tiny one-room apartment in Queens and is receiving financial aid from the New York government.

“It’s going to be a 360-degree change,” said the 36-year-old designer, who has a refugee sister in Colombia and her parents and grandmother in Maracaibo, Venezuela.

On his last day as president, Trump issued an order halting the deportation of more than 145,000 Venezuelans for an 18-month period. Some Republicans recently asked the Biden administration to enforce Trump’s order, but unlike this measure, the Temporary Protection Act passed on Monday gives them legal status that cannot be easily undone.

Ruth Valley is a Venezuelan trader who was stranded in Miami for just over a year. He had arrived on a tourist visa trip and wanted to take the opportunity to make some purchases of clothes, cosmetics and food to resell later in Venezuela and survive. However, the flights were canceled due to the pandemic in March 2020, two days before his return flight, and he had to stay in South Florida.

Given the situation in his country, he decided to seek asylum and although his procedures are not over yet, he will now apply for TPS and hope to be able to meet again at some point with his 15-year-old daughter, who remains in his country with her grandmother.

“It’s a way to make sure we’re legal,” said Valli, 39, referring to TPS. “I feel happy, not just for me but for all the Venezuelans who are here.”