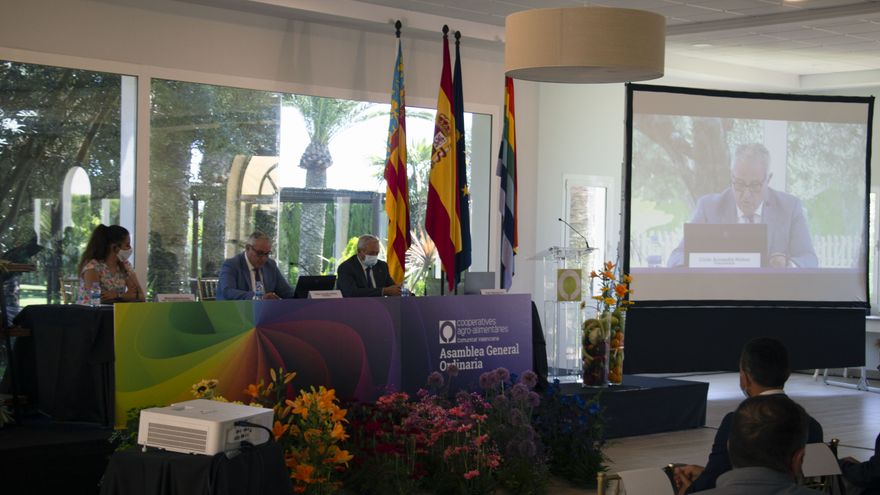 Agro-food cooperatives in the Valencian Community Its regular general assembly was held on Friday, attended by representatives of more than 60 cooperatives, where it was found that despite the pandemic, the sector has managed to maintain employment and activity.

In his address at the opening of the assembly, Federació President said, Cyril Arnandez, regarding the epidemic, during the confinement period, “cooperatives not only continued to operate, but also redoubled their efforts to ensure the provision of services and the supply of products.”

“Our dedication, and that of the rest of the dealerships in the chain, ensures that the shelves are available at all times, thus ensuring a climate of social stability at a critical time for our country,” Arnandis reckons, according to Cooperatives Agro-alimentàries in a statement.

During the gathering, data were presented from the Social and Economic Report of the Valencia Agri-Food Cooperative Organization corresponding to the end of the fiscal year 2019. In this period, the total sales of Valencia agri-food cooperatives amounted to €2.153 million, with the final value of commercial production amounting to €1,263 million.

Among the figures for the sector, it is worth noting that it consists of 333 cooperatives, of which 261 – which together bill 97% of the total in the sector – are associated with Federació. These cooperatives have 178,264 members and maintain 19,397 jobs, 74% of which are permanent or discontinued.

As a preview of the numbers for 2020, it was highlighted that no Valencia agri-food cooperative offers ERTE, therefore, employment and the pace of work have remained stable, adapting to the health requirements at every moment.

After the gathering, a video conference was held with the participation of the European Commission’s DG-AGRI Policy Sector Pasquale Di Rubbo, who explained to the attendees details of the farm-to-table strategy and opportunities for agri-food cooperatives.

Di Rupo highlighted that the goal of the Green Deal is to achieve carbon neutrality in the European Union by 2050, and he detailed the areas in which it should affect all sectors of economic activity.

In this sense, the Common Agricultural Policy and Biodiversity or farm-to-table strategies will create new commitments to farmers, who are responsible for 1% of all polluting emissions on the planet. The sector has expressed “concern about the lack of reciprocity, as Europe cannot force third countries to comply with these objectives, and the impact of this on the competitiveness of European agriculture.”

At the closing ceremony of the Association, President of the Spanish Agro-Food Cooperatives, Angel Villafranca; President of Cooperatives Agro-alimentantàries of the Valencian Community, Cirilo Arnandis; and Minister of Agriculture, Rural Development, Climate Emergencies and Environmental Transformation.

In his speech, Villafranca highlighted the strength of the cooperative movement, and within that, the agro-food cooperatives in Valencia.

He demonstrated the importance of farmers and cooperatives during the COVID-19 crisis and emphasized the need to confront the process of generational change that ensures business continuity. Likewise, he noted, referring to the current and future societal regulatory framework, that environmental sustainability passes first through the social and economic sustainability of the producer sector and cooperatives.

For his part, Arnandez stressed that the future “must be led by cooperatives and companies with principles and values, focused on people, who give back a part of their benefits to society, and are an engine for the advancement and development of towns and cities. They carry out their activism.”

Regarding the situation in the citrus sector and the prevalence of cotton in South Africa, he emphasized that “the ban on the use of methyl chlorpyrifos has caused this pest and its seriousness.”

In this sense, he lamented “the fact that it was banned without assessing what this might mean for the sector,” and recalled that “we combined two campaigns with unsustainable losses for many producers,” in which he requested “more money to investigate,” progress in biological control technologies. and biological and “compensation for those who have lost part or all of their crops”.

It has also demonstrated the role of Federació, coordinating through a delegation from the Ministry of Agriculture of the ATRIA (Integrated Processing Associations in Agriculture) network and its importance in the current and future scenario, and called for a greater moratorium on its management and continuous improvement.

Regarding the CAP and its implementation in Spain through the National Strategic Plan, Arnandis stated that “in these negotiations we lost, as we already lost in CAP 2014-2020”, referring to issues such as the continuity of historical rights until 2026, not including new hectares or convergence rights, and the department appealed that “we must move more and better to impose our theses and establish alliances with those who share them and confront them with those who do not.”

And finally, the Minister of Agriculture, Maria Mola, promised that the regional budgets in 2022 would reflect a quantum leap in the existing lines of cooperation between the administration and Federació, in response to the demands of Arnandis.

Likewise, she has expressed her disagreement with the way in which the status quo for some areas has been maintained in the NSP negotiations, due to what it means for areas such as the Valencian Community, as indicated by the cooperatives.