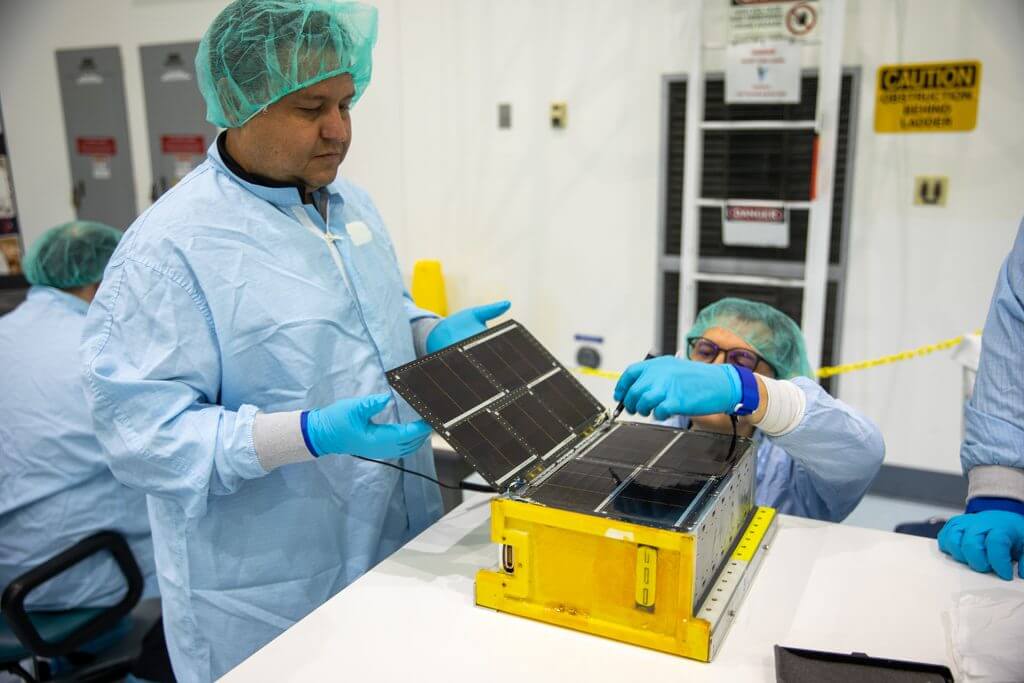 Two additional payloads will travel to deep space aboard the Artemis I, the first flight of the Space Launch System (SLS) rocket and Orion spacecraft, ready for launch, NASA reports.

CubeSats Team Miles and EQUilibriUm Lunar-Earth point 6U (EQUULEUS) are packed in dispensers and screwed into an Orion adapter, The ring that connects Orion to the SLS missile. They join five recently installed secondary payloads. These tiny satellites, known as CubeSats, will conduct a variety of science experiments and technical demonstrations. CubeSats will be deployed after the Orion spacecraft separates from the SLS.

The team, made up of citizen scientists and engineers, came together through the Florida nonprofit Tampa Hackerspace to develop Team Miles. The group considers itself a team of “innovators” who are open to testing technologies that may fall outside engineering standards.

The Team Miles mission will be carried out independently using a sophisticated on-board computer system. In addition, the bread box-sized spacecraft will use software-specific radio for communications with Earth. If successful, the CubeSat will travel farther than it has ever traveled with this size of spacecraft, 96 million kilometres, before the mission ends. (For comparison, the minimum distance from Earth to Mars is about 54 million km.)

Miles’ team works in a clean room at NASA’s Kennedy Space Center in Florida to prepare the CubeSat It will be launched on the Artemis I mission. The team designed the satellite to travel far beyond this spacecraft’s size, 96 million kilometers, before completing its mission. The CubeSat was developed as part of NASA’s Cube Quest Challenge and sponsored by the Space Technology Mission Management (STMD) Awards, Challenges, and Crowdsourcing.

EQUULEUS team members prepare the CubeSat to be loaded into the Space Launch System’s Orion stage adapter for launch on the Artemis I mission. The CubeSat satellite, developed by the Japan Aerospace Exploration Agency (JAXA) and the University of Tokyo, will help scientists understand the radioactive environment in the region of space around Earth called the plasmasphere.

EQUULEUS, developed by the Japan Aerospace Exploration Agency (JAXA) and the University of Tokyo, will travel to Earth-Moon Lagrange Point 2, An orbit between the Earth and the Moon in which the gravitational force of the Earth and the Moon is equal to the force required to move a small object with them. The CubeSat will demonstrate trajectory control techniques within the Sun, Earth, and Moon region and will image the Earth’s plasmasphere, a region of the atmosphere containing highly ionized electrons and particles orbiting with the planet.

EQUULEUS will measure the distribution of the plasmasphere, providing important information to protect humans and electronics from radiation damage during extended space travel.. The CubeSat will also measure meteor impact flashes and the dusty environment around the Moon, providing additional information important to human exploration. EQUULEUS will be powered by two solar panels and deployable batteries, powered by a hot gas propulsion system with water as the propellant.

The SLS will launch the United States into a new era of exploration to destinations beyond Earth’s orbit and demonstrate the missile’s heavy-lift capability. The agency is taking advantage of the additional mass and space available to provide a rare opportunity to send multiple CubeSats to conduct science experiments and technology demonstrations in deep space. The cube satellites are all deployed after the SLS completes its main mission, launching the Orion spacecraft on a trajectory toward the moon.