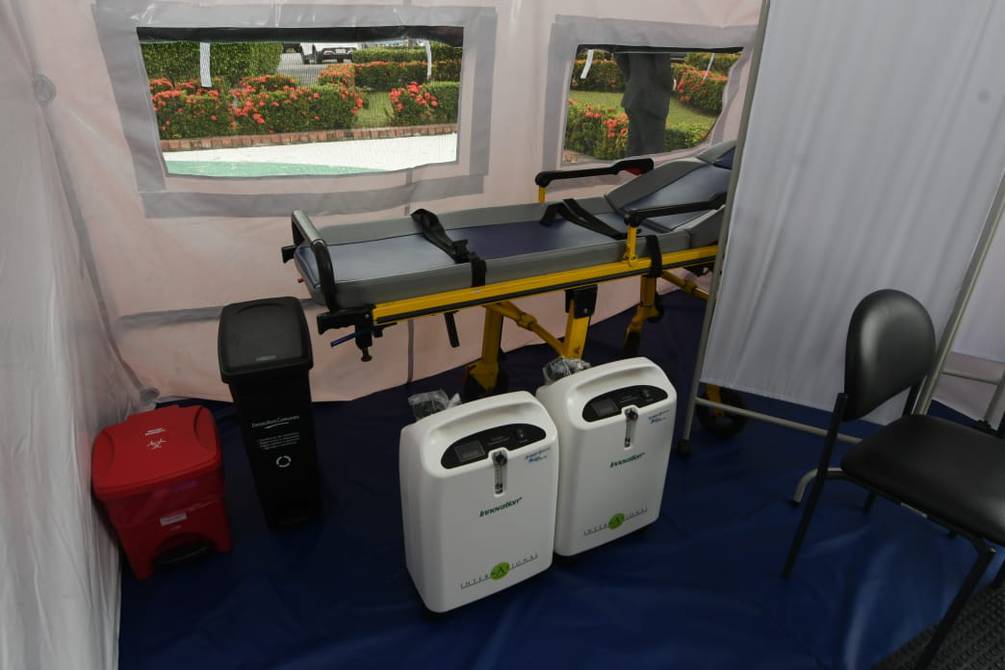 This is the tenth equipped tent that Esquel and Usaid donated to hospitals across the country.

Patients with symptoms of COVID-19 arriving at Luis Vernaza Hospital will be treated at a 54-square-meter triage station that opened Thursday 20 in the backyard of a health home.

The tent contains six stretchers, and a diagnostic and observation space; Plus oxygen therapy for immediate care for those arriving with shortness of breath.

Doctors stress that it is important not to mix patients who have not yet been diagnosed with those who are already being treated for the virus. For this reason, this new space is expected to serve around 3,000 patients in the coming months, thus reducing the demand for hospital beds.

The US Consul in Guayaquil, Brian Quingley, opened the station on behalf of the United States Agency for International Development (USAID), an organization that provides support to Ecuador through the “oxygen to save lives” program.

The triage station will be equipped with 10 oxygen therapy kits, 10 pulse oximeters, 10 oxygen concentrators, as well as medical supplies, devices and personal protective equipment to care for COVID-19 patients.

According to the agreement, the triage station will stay for a period of seven months to provide care to patients with the hospital’s health personnel.

José de la Torre, director of the Oxygen to Save Lives program, noted that these screening tents have been donated in twelve hospitals in nine provinces, and that each one would be valued at approximately $ 100,000 with equipment.

He also confirmed that the tents are reusable and can be used later as vaccination centers or medical brigades in rural areas.

Alberto Dakach, Deputy Technical Director and Head of Emergency Department at Luis Vernaza, said ICU beds are 97% occupied, that is, 73 beds with injured patients fighting for their lives.

The doctor says there has been a drop in local patient arrivals this week, but he points to continuing referrals from other hospitals, especially in the Sierra.

Dakash believes that citizens have lost their fear and respect for the virus, and he hopes that the number of hospitalizations will continue to decline, although he fears there will be an outbreak again within fifteen days after the May 24 holiday.

“We are facing the fall of a second wave, but let’s not ignore it, because there may be a third and fourth wave as long as the majority of the population has not been vaccinated, this continues for a long time. We still have a year of health emergencies,” the doctor said. (I)

See also  In development: Several cancellations and delays in China due to a possible visit of Nancy Pelosi to Taiwan