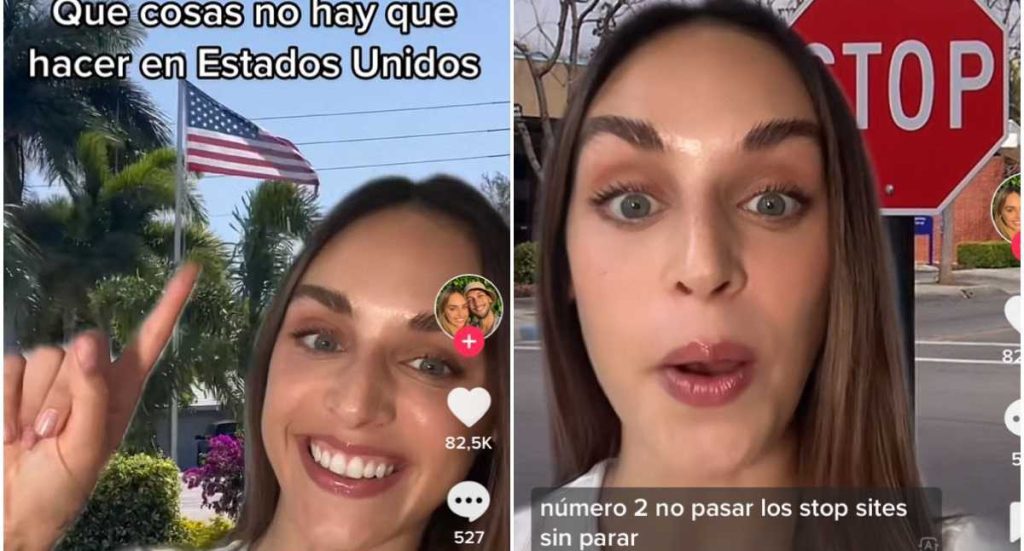 Recently, a trend has appeared in social networks where Latinos live in other parts of the world, They create content aimed at those people who are considering immigrating to another country, in an effort to prevent some headaches that the recently arrived immigrant usually has.

However, Tiktoker of American descent is well received by the Latino community because of the advice she gives as a citizen to Latinos who have recently arrived or who are planning to settle in her country.

Samantha Trottier is known for creating content on TikTok with her partner Hernán Regiardoa man of Argentine descent who stole a woman’s heart and encouraged her to learn more about Latin American culture.

The content they make together is widely viewed, given the cultural clashes between the United States and Latin America, both of which are usually a source of laughter and learning between the two cultures.

In recent days, Samantha has made a solo video in which she talks about the things that fall under her concept Latinos should not do in the US.

According to the content generator, Latinos are not advised to go directly to study, because it is very expensive This means having to go into debt for years.

Indebtedness that in many cases becomes unsustainable due to high costs, in addition to the economic situation in the country, where loans are more expensive every day.

Samantha highlights the importance of complying with US road regulations, especially the “Stop” signs since then Traffic authorities are very demanding and the consequences of breaking the law are high.

“Don’t pass the stops without stopping first, if you don’t follow the rules the police will arrest you,” says the American citizen.

In a humorous way, Trottier invites his followers to do so Not learning much about geography, because this branch of knowledge is not taught in the United States It is not usually a topic of conversation.

“We don’t learn geography because in the United States we don’t know anything about it,” he revealed in the video.

According to Samantha, the merienda is a dining space widely used by the Latino community, which should be deleted due to In the United States, dinner is usually taken at 6 pm.so if the idea is to eat with appetite, it is advisable to wait a little while at the appointed time.

In other posts, women give other kinds of recommendations like Avoid calling ambulances, because an ambulance going home to take care of any health condition, no matter how minimal, can cost $5,000.

For this reason, it makes a call so that it is only true emergency calls. On the other hand, he gave advice about patriotism present in the United States.

“If you don’t have a flag, your neighbors will think you’re not a patriot.The woman said

The flag advice arose after one of his followers worried about Argentina who didn’t know if he was going to put up the flag of the United States and his country, to which the woman responded. “Nothing happened, and now many of them have one from Ukraine too“.

To date, the woman already has more than a million followers on TikTok and a fan base made up of those who are interested in her advice and her relationship with Argentine Hernan Ricardo.

See also  The great tech event in Miami, eMerge, is once again being held with a large presence of Spanish startups