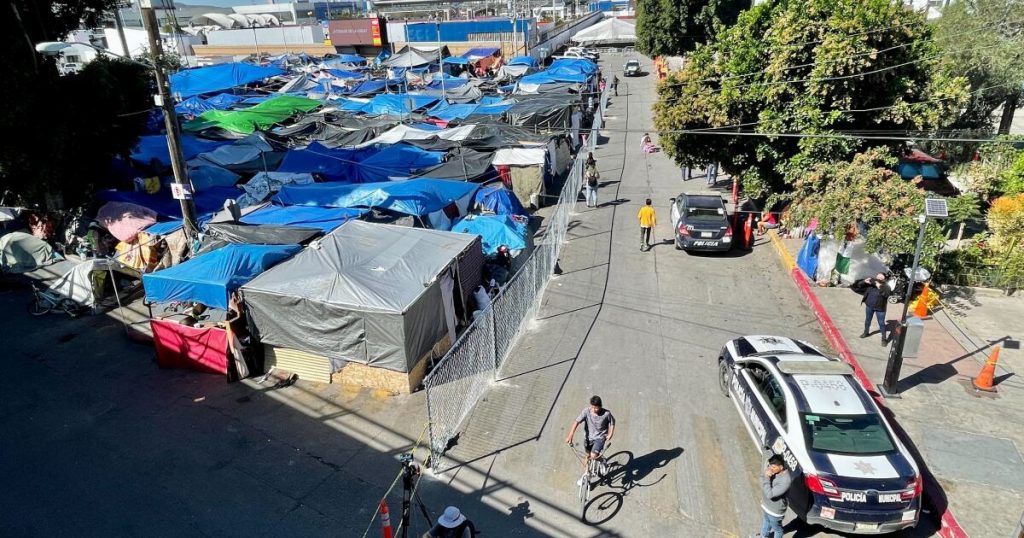 A man approaches a group of municipal police in Tijuana. He takes credentials from his bag and with them is granted passage to the migrant camp that has been set up for months in El Chaparral.

This is the new dynamic for the hundreds of migrants living at the site after local authorities surrounded the area with nearly 180 linear meters of cyclone nets Thursday night.

The goal, according to the authorities, is to conduct a census of the people living in said settlement, and give them credentials so that, in addition to establishing their identity, they can control the entrances and exits.

“Who enters and who leaves will be registered, and we will provide security and human rights conditions,” Tijuana Mayor Montserrat Caballero said on Friday.

In total, 738 immigrants were counted out of an estimated 1,230 people Thursday night. The registration of the missing is scheduled to continue on Friday.

Most of the people living at the site turned out to be Mexicans, Caballero said, as well as immigrants from Colombia, Brazil, El Salvador, Guatemala, Honduras and Nicaragua and one person from the United States.

Caballero added that its purpose is to provide support to families who wish to return to their countries of origin, and to recommend asylum for those who prefer to stay in the city. He said a Honduran family had already requested his return.

This camp has been set up since the beginning of the year at the entrance to the PedWest pedestrian crossing on the Mexican side. This border crossing has been closed since April 2020 in response to the pandemic.

But just days after the United States reopened the land border with Mexico to fully vaccinated tourists, it is believed that the footpath could reopen operations.

A Customs and Border Protection (CBP) spokeswoman said in a call with PedWest that “the agency will continue to work closely with its international partners to determine how to resume travel safely and sustainably.”

Caballero denied that there was pressure from the US government to vacate the entrance to the pedestrian crossing.

There is no pressure from the United States. On the contrary, there is patience and a desire to support what we need to open,” Caballero said. “It will not open on November 8 (…) We will continue with this problem, but the important thing is first to have certainty of information. “

However, he acknowledged that the goal was to finally make the space empty again.

“The goal is that we can travel back there and move people (either to) their places of origin in Tijuana, or fulfill their mission of moving legally to the United States. I am not the one who limits anyone’s dreams and I am here to help them.”

On Friday morning, the immigrants complied with the requirement to show their credentials to enter and leave the venue.

There were also those who had been waiting outside the ocean since yesterday and were unable to register, so they kept waiting for the authorities to arrive to do so.

Pedro Rios, director of the Committee on American Friends of San Diego, went to the site to document what happened and speak with immigrants. “What they told me is that they feel locked in, and they feel as if they have attained El Chaparral citizenship,” the activist said.

Rios added that the governments of Mexico and the United States must respond to the humanitarian needs of migrants.