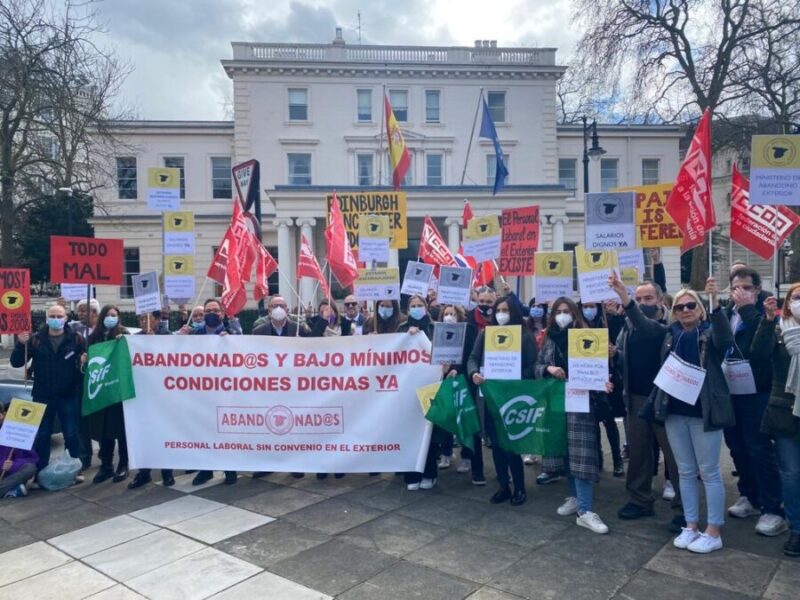 Two weeks of indefinite strike: thousands of Spaniards Without a UK passport because of the indifference of the Foreign Office

● Staff working in all offices of MAEUEC in the UK (Embassy of Spain and Consulates General of Spain in London, Manchester and Edinburgh) began an indefinite strike on 14 March to demand better working conditions and its adequacy The situation in the United Kingdom after Britain’s exit from the European Union.

● Among other demands, the group is calling for a salary update that corrects the significant loss in purchasing power caused by the thirteen years of freezing, which is equivalent to the cumulative inflation from 2008 to 2021 that currently began as a result of Brexit.

● The workers are joining the claims of the Spanish residents of the country and requesting quality overseas service in the UK from the Government of Spain. In this sense, a batch of signatures has been launched through the platform change.org.

● The government of Spain took no action to reach an agreement with the affected workers.

United Kingdom, 25 March 2022. Staff without agreement at the Consulates General of Spain in London, Manchester and Edinburgh and the Embassy of Spain in the United Kingdom continue to support the indefinite strike called for last Monday 14 March. This measure, approved by the majority of workers, comes after months of negotiations with the Ministry of Foreign Affairs in which the group’s demands did not receive the expected response. Workers have been denouncing for months the precarious situation they find themselves in, which has been exacerbated by the impact of Brexit on the British economy.

Among the demands, the group calls for a salary update that corrects the significant loss in purchasing power caused by the thirteen years of freezing, which is equivalent to the cumulative inflation from 2008 to 2021, which is currently starting as a result of Brexit and has reached its peak. In the past thirty years. In addition, workers deplore that many colleagues are below the minimum wage for professionals set in the UK. “It seems inconsistent to us that the current government approves increases in the minimum salary for professionals in Spain and does not respect the minimum salary for professionals in other countries, allowing some workers in the Spanish administration abroad to be below the poverty line,” the group sources. “We feel abandoned by the Spanish ministry and administration in general, we are a reference point for the thousands of Spanish citizens in the UK after Brexit and we don’t even have an agreement that protects us.”

Through the change.org platform, The workers began collecting signatures To denounce “the bad management of the Ministry of Foreign Affairs, European Union and Cooperation in the United Kingdom, as a result of arbitrary cuts that made the services provided to citizens, as well as the working conditions of its employees, more dangerous.” According to sources from the group, the terrible working conditions of workers directly affect the service provided to the citizen, which increased exponentially after the United Kingdom left the European Union. “In the last year alone, 21 workers have left their jobs permanently. Until these places are replaced (a process that takes several months), the work falls to the rest of the workers, who cannot cope. By the time the place is filled, a colleague has given up else already and the process repeats.”

According to the data of the National Institute of Statistics, there Some 2600 Murcia Currently residing in the United KingdomAlthough the data provided by the British authorities raise this figure significantly. The main actions that citizens are asking for morsians It is the renewal of the passport and the writings in the consular civil registry. These same sources indicate that “we are not enough workers to meet the demand and there are thousands of citizens waiting for an appointment, Brexit has led to an avalanche.”

Despite everything, it does not seem that resolving the situation of workers and citizens is one of the priorities of the Government of Spain or the Ministry of Foreign Affairs. After two weeks of indefinite strike, there was no move by the establishments to defuse the situation. The only thing that shows this indifference is the state of institutional abandonment in which we find ourselves and which we have condemned for years. There are thousands of citizens who need more consular services due to Brexit, but both the need of these citizens and the precarious situation of the workers do not matter in Madrid,” the workers resigned to admit.

“We know the time chosen is not ideal, but on the 1st of April the UK financial year begins and many of us will not be able to cope with, for example, higher energy prices (the British government has announced a 54% increase) or higher rents. ‘, they explain from the group. “We need an immediate solution or we will have to give up our jobs, with consequent harm to citizens who need the services of the consulates and the embassy.”

See also  3.5 million doses of Moderna arrive donated by the US government 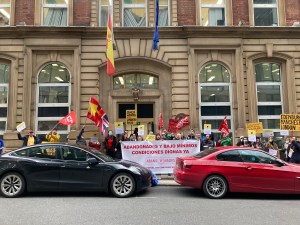 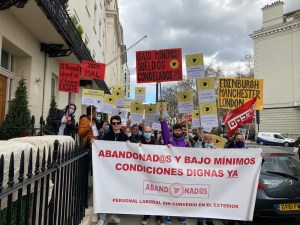 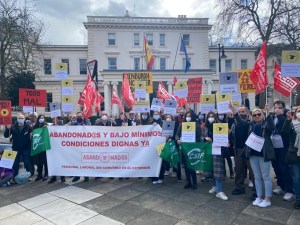 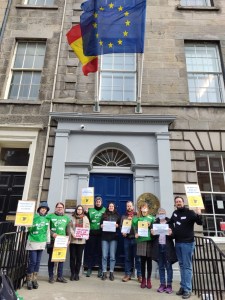