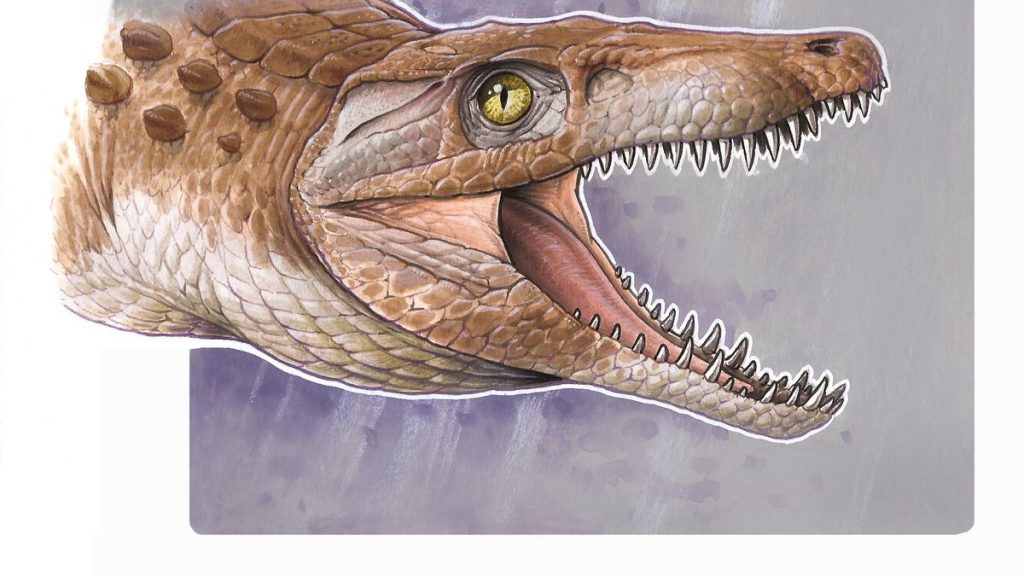 Burkesuchus was the size of a lizard and He is no more than 70 cm tall. It walked on all fours, and its neck, back and tail were covered with a double row of protective bony plates, superimposed in a similar fashion to a roof. “Despite the fact that its jaw and teeth have not been preserved, kinship relations lead us to assume that it was a predator of small animals, possibly invertebrates, and that it would hunt on the shores of the lakes in which it lived.”Note the paleontologist.

“I found a crocodile!”. Detective cry Federico Agnolin It was resounding near the community of Malin Grande, in the Aisne’s Chilean Patagonia. Small bones were exposed on the surface of the rock, but later excavations using maces and chisels have been revealed around the fossil. The back of the skull is impressively preserved.

The analysis reflects how, 150 million years ago, The ancestors of crocodiles began to modify their anatomy, adopting an amphibious way of life. Like its current relatives, it had a fleshy flap that, when closed, protected the ear when the animal was immersed in water. Burkesuchus was part of a reptile fauna that included, in addition to the three-meter Chilesaurus, large, long-necked dinosaurs, relatives of Diplodocus and huge herbivorous titanosaurs.

In the area, at an altitude of 1500 meters above sea level, there are huge fossil deposits of Jurassic reptiles, but access to them is not at all easy. You have to wade in a very strong river, dangerous even for trucks and four-wheel drive horses, go through a thick forest of linga and ride almost two hours from camp, through a mountain where bad weather and sudden snowfall are frequent.

“The first day of research was really unforgettable”LACEV coach and team member Marcelo Isassi recalls, along with Anolin, Sebastian Rosadilla, Gabriel Leo, Rita de la Cruz and David Rubellar led by Novas and Manuel Suarez. “After climbing with horses and crossing large expanses of ice where the animals suddenly sank in the abdomen, we began to search for fossils. We were very excited because in an area of ​​no more than 100 meters we came across many articulated skeletons of chilisaur.recounted.

Once extracted, the blocks of rock containing the fossils were properly rolled up for transport to Santiago de Chile and, after the necessary permits were obtained, were brought to Buenos Aires for preparation and study.

American Coleman Burke (1941-2020) was a Patagonian and passionate about paleontology, playing an instrumental role in fossil searches. “He and his wife, Susan, have given us their support and enthusiasm for making new fossil exploration and discoveries,” Novas said. Couldn’t get a better homage: And now Grandpa Crocodile bears his name.