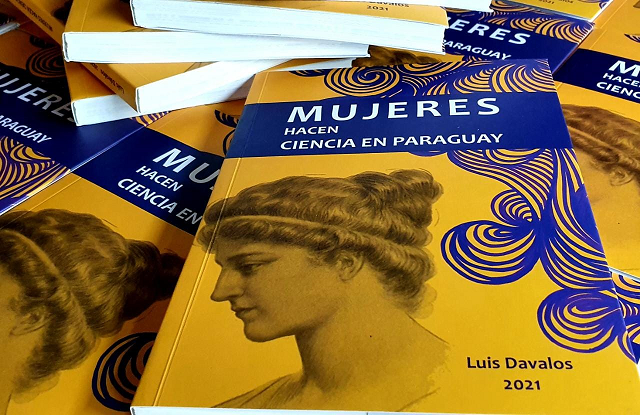 Asunción, Paraguay, IP Agency.- This Thursday, February 11, 2021, at 7:00 pm, International Day of Women and Girls in Science, the book “Women do Science in Paraguay” written by Luis Davalos, with the support of the Scientific Society of Paraguay (SCP), will be launched within the framework of 100 years of its creation. .

The event will be broadcast on Educanal, Channel 21 of Tigo Star, and through the Facebook page of the Scientific Society of Paraguay.

The author, Dr. Luis Davalos, is a student of science, technology and community issues at the national level and a critical observer of the development and implementation of policies and programs in the scientific field in Paraguay. Luis Davalos is the former president of the National Council of Science and Technology (CONACET) in Paraguay and the designer and promoter of the Paraguay Science and Technology Development Program (Procencia).

The presentation will be led by Dr. Antonietta Rojas de Arias, President of the Scientific Society of Paraguay and one of the country’s most prestigious female scientists.

An introduction to Dr. Alberto Janowski, a scientist famous nationally and internationally for his important work related to nature conservation, especially biodiversity and landscapes.

The book will be available in print and digital copies, free of charge, at the offices of the Scientific Society in Paraguay (Andrés Barbero 230) and can be downloaded from the Foundation’s website ( http://sociedadcientifica.org.py/ )

The Women Do Science program in Paraguay consists of two parts: The first is an approach to women in science and their contributions throughout history and in different global contexts. The second focuses its content on the profiles of women practicing science in Paraguay who are classified in the National Researcher Motivation Program (Pronii).

See also  USA vs Jamaica: Sergio Dest opened the scoring account with USA: What an amazing goal against Jamaica!

“This work, done by Dr. Louis Davalos, puts the women in science in the country by publishing their personal files and emphasizing their mission. Women studying science in Paraguay, the vast majority of young researchers refer to us, who only open up hope. Paraguay needs to know what its researchers are doing and from that knowledge and prestige they can gain, we will be able to move forward towards scientific development and achieve a more equitable country. From the Scientific Society of Paraguay we have no doubt that this work will contribute to the realization of this purpose.

“Once again, Louis Davalos gives us a work that critically analyzes aspects of science from an almost external perspective, observing and analyzing a world that seems not to belong to it and, on the contrary, it is a whole and sensibly relevant part. On this occasion, the work “Women Doing Science in Paraguay” goes beyond the female presence and the contribution they make to the development of the national sciences gives us an interesting review of women in science since ancient times, in a formula that invites you to continue reading to find out what is to come and the intrigue of how it will approach the following ages. This common thread, from ancient times to the present day, plays in Paraguay a lexicon of knowledge that allows us to understand, justify and take into account the struggle for equality in such a prominent field of humanity as knowledge. ”

See also  “I want to give myself a science fiction novel and a graphic novel.” Bernardo Fernandez