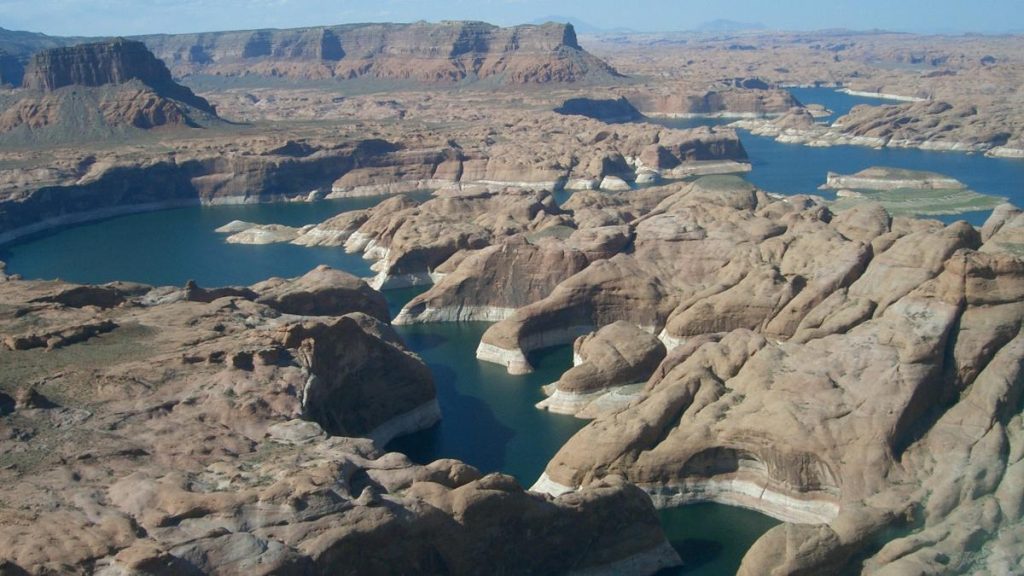 The opening scenes of the famous movie planet of the apes (Der: Franklin J. Schaffner, 1968) Shows a deserted landscape where a group of scientists walk under the watchful eye of armed monkeys.

These photos of drylands were photographed, in 1967, at the bottom of what was initially the Powell Reservoir, formed by the Glen Canyon Dam, which was completed in 1963 but wasn’t operational—due to lack of water—until 17 years later.

If 20th Century Fox wanted to remember those sequences at the same point on the Colorado River, in Arizona (US), it would have enough facilities to do so because the misnamed Lake Powell is again at low hours; In very shallow water to be more precise.

Earth can be seen better from space

This week, the European Space Agency (ESA) released a set of satellite images, within the Copernicus Program’s Earth Observation Project, which clearly noted the loss of water reserves in the Arizona Reservoir, the second largest. largest in the United States in the past five years.

An animation (GIF) released by the European Space Agency (ESA) showing changes in the surface area of ​​the reservoir near Bullfrog Marina, about 155 km north of Glen Canyon Dam, between March 2018 and March 2022. Dry conditions and low water levels are unmistakable in the image taken on the 18th March 2022, compared to the 2018 coastline shown in the image in yellow.

“After decades of drought, water levels in Lake Powell, the second largest man-made reservoir in the United States, have fallen to their lowest level since its creation more than 50 years ago, threatening millions of people’s water supplies. Satellite images allow us to take a look A closer look at lower lake levels in the midst of the climate crisis,” the European Space Agency highlights in an information note accompanied by satellite images.

Lake Powell borders southeastern Utah and northeastern Arizona, and is a major reservoir in the Colorado River Basin. The Colorado River, through which Lake Powell flows, was constructed in Glen Canyon in the early 1960s. The lake supplies water to nearly 40 million people, irrigates more than 5 million acres of land, and has the capacity to generate more than 4,200 megawatts of hydroelectricity.

In mid-March 2022, Lake Powell’s elevation dropped to an astonishing 1,074 meters above sea level, the lowest since it was filled in 1980. This sharp drop in water levels is documented in natural-color images captured by the moon. Industrial Sentinel-2, Copernicus program.

The European Space Agency notes that in addition to a lack of water contributions, according to a report by the US Geological Survey, Lake Powell lost nearly 7% of its potential storage capacity between 1963 and 2018 due to sediment buildup.

The European Agency also cites data from the National Oceanic and Atmospheric Administration (NOAA) of the United States indicating that this spring nearly 60% of this country’s continental land is experiencing drought.

In more than half of the continental United States, these conditions are likely to persist through at least June, depleting water supplies and increasing the risk of wildfires. While these conditions are not new, the National Oceanic and Atmospheric Administration (NOAA) expects them to worsen in the coming months, says the European Space Agency.