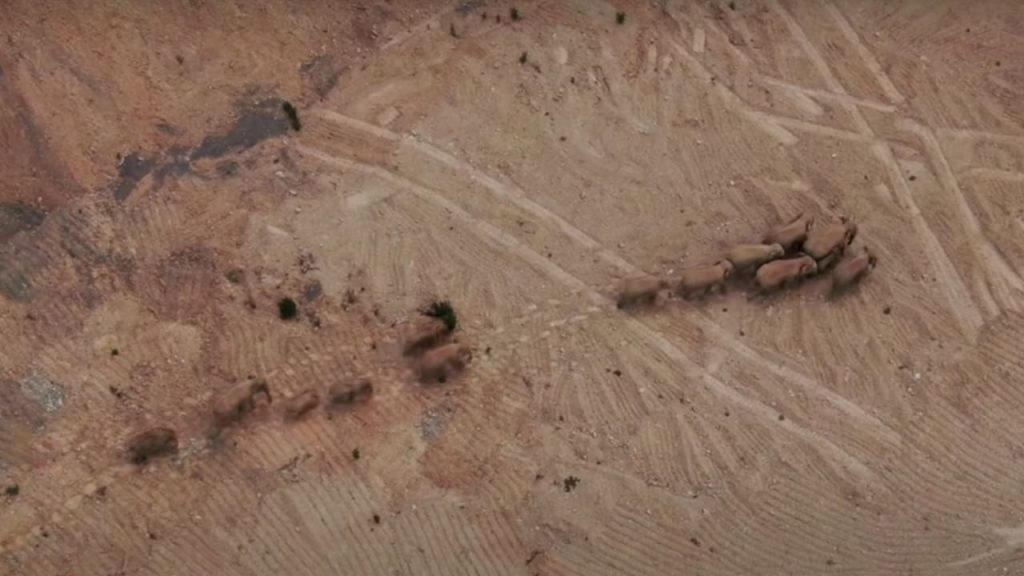 They left their natural habitat in southern China’s Yunnan province a month ago and are still wandering aimlessly today: Fifteen wild elephants continue their own journey By region cities –They have already covered more than 500 kilometers– To the amazement of local residents, authorities, specialists and Internet users.

Pachyderms, native to Xishuangbanna district, known for its rainforest and monsoon climate, migrated to the north of the province at the end of May without a clear explanation.

During their journey, the elephants walked through different cities under the watchful eyes of villagers and authorities, who cleared roads to ease their passage and used food as bait – Japanese bananas, pineapples, and corn – in order to attract their appetite and prevent them from entering densely populated areas.

In recent weeks, local media have speculated about their possible intrusion into the urban area of ​​Kunming, the capital of Yunnan Province, but in another unexpected turn of events, the herd walked in a southwesterly direction and made a stop at Yuxi, a neighboring town, where they have remained until now.

On the way was one of these roaming Asian elephants, who broke up with the group and is now about 17 kilometers from the herd, CCTV reports.

The rest stayed in Yuxi, either to wait for the “lonely” elephant or because the local climate there is similar to that of their native Xishuangbanna, according to experts cited by the Chinese network.

Ask the Experts ‘You Should Improve Your Baby’

State media reported that the number of wild Asian elephants – under state protection level A, which is the highest in China – living in Yunnan province was 300 x 193 in 1980, which did not preclude speculation about whether their migration was due to human activity.

Researcher Pan Wenjing, deputy director of Greenpeace’s East Asian Forest and Oceanic Forestry Unit, told Efe in a phone conversation from Yunnan that it was “very difficult to know the exact cause” of a migration of this scale, although it affects that “the loss of its habitat is a huge challenge” to protect Asian elephants in China.

“It is true that the numbers of Asian elephants have increased in recent years, but this is mainly due to the disappearance of poaching in the area. However, the area of ​​natural forests has diminished as a result of the expansion of human activity”, commented.

According to Pan, “Although it is common to see elephants changing their territories, it is very rare for them to move such long distances.

“The movement of wild animals is not limited to the boundaries of a protected area, especially for large species like this. Your home will change if factors such as your population or your environment change, so it is very important to protect and restore appropriate habitats, with larger areas, to reduce animal-human conflict”, Add.

Meanwhile, the herd grabbed covers and their videos went viral on the Internet that they became world stars: “People showed great curiosity and the locals were very tolerant and kind to them, even if they caused financial losses.” Ban says, referring to the damage that elephants have done in the fields in the area.

“If the elephants eat the crops, nothing will happen, we will plant again next year. But if they are injured there will be no more.”Villager Yuxi told CCTV this week.

We’ll raise them here if they don’t leave. We have corn in the mountains and sugar cane and rice in our fields. Whatever you want, enjoy whatever you want. And let them rest in the woods when they need it.”Another added.

All this, stresses the researcher, is a good sign: “It means that people are increasingly aware of the importance of protecting wildlife, and it represents an opportunity for the public to learn more about the issue.”

See also  In the United States, they found the remains of Gabi Pettito's partner, Brian Laundry

About how the pachyderms’ saga will end, expert Pan asks for calm, because “no matter how far they follow, the roads are closed or they try to lure them with food to change their movements, they have their own thoughts.”

It is impossible to force them to walk a path. We have to be very patient and give them time to find their way home.”The researcher concludes.