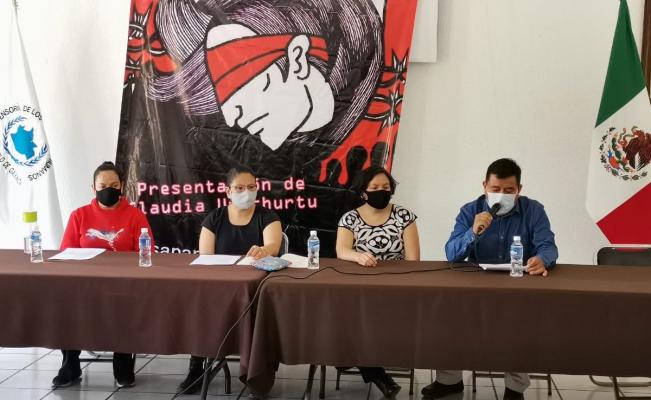 Relatives of Oaxaca de Juárez.- Claudia Uruchartu, Which disappeared in the vicinity of the municipal palace on 26 March Asuncion Nocchilton, He went to the Human Rights Ombudsman of Oaxaca (DDHPO) people to demand precautionary measures, as he has received threats in recent times.

He therefore asked local authorities and the UK government to intervene in the matter.

Claudia’s sister, Elizabeth, said that the missing woman was deprived of her freedom in opposition to Morenoit Mayor Lizabeth Victoria.

Prior to the protest, Claudia had submitted several complaints for the inspection of the Superior Organ of the State of Oaxaca (OSFE Oaxaca), as she alleged misuse of public resources in the current municipal administration.

He reiterated that according to versions of witnesses, it was revealed that a woman was forcibly transported in a red truck; Presumably this is about Claudia.

ALSO READ: Claudia vanished in Oaxaca after protesting against the mayor of Noxixton; They were looking for him for 10 days

Elizabeth reported that on March 30, a man’s corpse was discovered by residents of the Los Cantaros area in Mixtech, but when investigating agents went, they found nothing.

Later, they go to Claudia’s house to ask if a key found at that place is that of a missing woman; The result was positive.

“It implies that he had to be in that area after her disappearance,” Elizabeth said.

For her part, Claudia’s second sister, Hyde, asked authorities to investigate her sister’s whereabouts. “Claudia’s life depends on the speed with which the investigation is conducted,” he said.

Likewise, he called for solidarity for organizations and human rights defenders to demand Claudia’s location, while human rights institutions called for his family to take precautionary measures, because, since Claudia’s disappearance, the suspects were the vehicles. They are coming to his house. Threatened calls have been received to the house and relatives.

Meanwhile, he asked the Oaxaca Congress to begin the process of disappearing powers to remove Asichon Nucitlan and National Regeneration Movement Party (Morena) national president Lizabeth Victoria from candidacy in the re-election to the post of municipal president. Focused on the complaints lodged by Claudia before her disappearance.

On the other hand, in their capacity as British citizens, they requested the United Kingdom government to intervene in the matter.