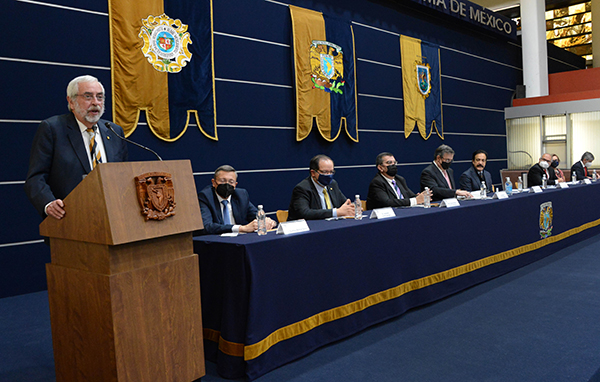 Project COLMENA, the first Mexican and UNAM lunar exploration mission, was launched today, accompanied by the Ministry of Foreign Affairs (SRE), the Mexican Space Agency and the State of Hidalgo.

The mission, which will land on the moon next June, consists of five small robots that will be placed on the lunar surface, already installed on the Peregrine spacecraft, from the American Astrobotic Company, and ready to travel for a distance of 384,400 kilometers. that separates from Earth from our natural satellite.

During the mission presentation, University President Enrique Grauy Witchers said this was a celebration because it shows the strength of the national university and its research institutes, as well as the progress made by the Space Instrumentation Laboratory (LINX). Participation of 200 students applying basic sciences to transform reality.

The Dean celebrated the interest of the Mexican state in applied sciences to advance the future of our nation; From the State Department for inclusion in public policies, as well as from the Hidalgo government to promote innovation.

“We’re going to be brief so we can solve the problem of these devices getting out into space in the coming months, and we’re going to have to celebrate, in June, their launch, and their arrival later,” the Grau Witchers said at the ceremony. In the Rectory Tower of the National University.

In his speech, the Minister of Foreign Relations, Marcelo Ebrard Casaubon, noted that “the function of the Ministry of Foreign Affairs is to support relevant scientific projects in Mexico, this is our mission, and in the case of space we ascribe great appreciation.” The priority level in Mexican foreign policy.

On this occasion, the Governor of the State of Hidalgo, Omar Fayyad Mensis, emphasized that the mission of this project sets one of the priorities of the future and that the participating institutions realize the unique moment that the global space sector is going through, of which Mexico should be a part.

“COLMENA highlights all the values ​​of UNAM and gives Mexican society a new way to see and understand the modern world, the confidence that things are possible and that we can overcome our own limits. He will become a landmark and when he happens, next June, the children and youth of Mexico will know about him. Perhaps that is what inspires the next astronaut or leader of the next missions.”

Previously, the LINX Responsible, from the Institute of Nuclear Sciences (ICN) at UNAM University, Gustavo Medina Tanco, stated that what is known as Espacio 4.0 is undergoing a major transformation and that COLMENA is part of it as an original global mission; It is the first stage of the field of space technology that will be developed so that Mexico becomes a producer of goods, wealth, knowledge and luxury.

The mission proposes that the robots work independently, taking nature as an example, proving that in a coordinated manner they can be explorers and miners of space.

See also  The man who made a red salad in space

It’s a group of five robots – less than 60 grams each – 12 centimeters in diameter with all of their electronic devices less than two centimeters from the surface of the regolith. “It’s an international technical challenge, it’s the first time this has been done and Mexico and UNAM are doing it,” he emphasized.

For his part, the Director General of the Mexican Space Agency, Salvador Landeros Ayala, confirmed that the COLMENA project confirms that Mexican engineering is at the level of the best in the world, as it will be the first Mexican project to explore the moon, and announced that work is already underway on new projects to generate oxygen and energy on the moon. And all using Mexican technology.

Landeros particularly highlighted our country’s recent integration into NASA’s Artemisa program, thanks to the United States Government’s invitation to the Mexican government and the efforts of the State Department.

Meanwhile, ICN Director, Maria del Pilar Carrion Castro, highlighted the efforts of Medina Tanco and students for the common good. It is an example that it is thanks to basic science that large-scale projects can be realized, and he expressed his commitment to support the initiatives that put the Institute, UNAM and Mexico.

On behalf of UNAM, the Secretary-General, Leonardo Lomeli Vanegas, and the Scientific Research Coordinator, William Lee Allarden, among others, also participated.

See also  “There is a slight fear when you discover the enormity of the universe.”