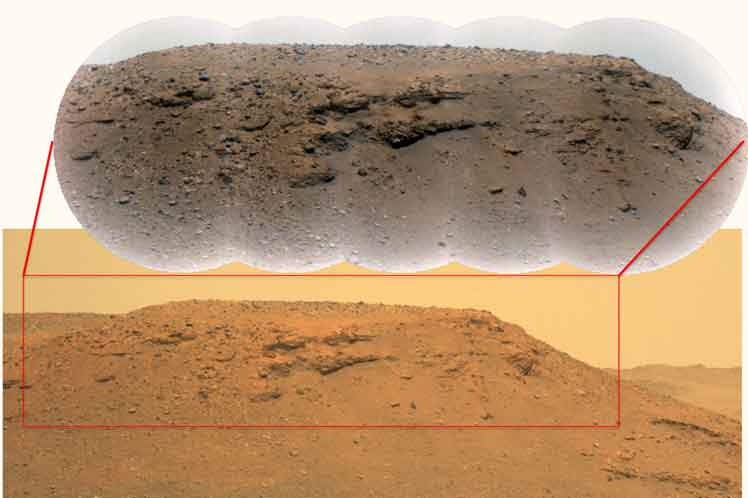 According to information from the United States National Aeronautics and Space Administration (NASA), this formation, called Delta Scarp, is 115 meters wide and is part of a fan-shaped sediment remnant. Which can result from the confluence of an ancient river and lake.

The final image from which the place can be detected consists of five images taken by Perseverance’s Remote Microscopic Imager on March 17, 2021 (the 26th Mars day, or mission’s sun), and taken 2.25 kilometers away.

“For the first time, you can see real evidence of these conglomerates and intersecting layers that have been postulated for these sedimentary deposits,” said Vivian Sun, one of the scientists who has been studying Jezero crater with orbital images. .

The NASA report notes that so-called clumps are grouped together in an aquatic environment, and the intersecting layers may be evidence of water movement recorded by waves or ripples of loose sediment that the water passed through long ago.

He also notes that about 3.8 billion years ago, the crater probably contained a body of water the size of Lake Tahoe, along with a river and fan-shaped delta formed from sedimentary deposits from that river.

Sun specified that scholars have long known about the existence of a running river in the Jezero Delta Scarp in antiquity.

Because of this, and because of the sediment deposits and other materials on the cliff not only from within Jezero but also from outside, it should be a great place to look for signs of ancient life, he said.

The Perseverance Mission hopes to be able to explore the Delta Scarp region during the Rover’s second science expedition scheduled for next year.

Perseverance is equipped with a SuperCam that can perform five types of analysis to explore the geology of the Red Planet, helping scientists choose which rocks to study for signs of microbial life millions of years ago.