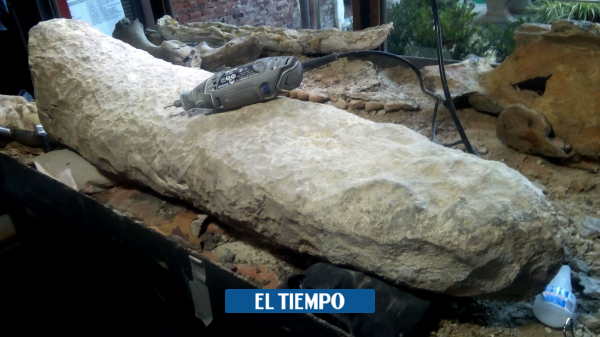 Paleontology Museum in San Pedro, Located in the province Buenos AiresA new piece of great historical value, a fossilized tail of
The giant armadillo who lived at the end of the Ensenada era, more than 700,000 years ago.

The discovery occurred when the operator Fausto Capri was digging with his machine at a depth of about 10 meters in a quarry, and he noticed something that caught his attention, before contacting a team of paleontologists who confirmed the nature of the piece, which is a meter long and weighs 43 kg.

Although fossil discoveries are common in the region, it stands out for its ancient times, because it belongs to a time when not much data is known about the giant species that inhabited the continent, such as this
The armadillo, which weighs more than a thousand kilograms and is 4 meters long and has a shell thickness of about 5 cm, makes it a kind of “live battle tank,” he said. Paleontologist Jose Luis Aguilar.

The time of giant animals

“In this time period, very little is known about the many animal members of South America who have walked through these places, and every time you find a fossil from the end of the Ensenada era, you always find that these animals have different adaptations … You see that they are tougher, more sturdy, and have different giants, and bigger giants, “said Aguilar, Director. Paleontology Museum in San Pedro.

This time it is considered the “climax of the evolutionary response”, during which the natural herbivores of South America increased their size to defend themselves from the arrival of New predators from North America When the two continents were united between 3 and 4 million years ago.

(See also: The largest known group of galaxies was discovered at the beginning of the universe.)

“From North America came carnivores such as tigers with teeth, wild dogs, and cats … a whole group of carnivores that were not in South America and that began to feed on those herbivores such as giant sloths (…) That after a few hundreds of thousands of years, these animals begin to reproduce as if they say, “They have gotten too big for you to attack.”

In the same area, many fossils of different animals have been found in a limited space, since their existence Swamp was a “natural trap.” For animals.

“At the end of this Ensenadense, all that area was an ancient swamp, and an ancient wetland, and it was a natural trap, and the large insects came to eat attracted to pastures or to drink water and found a very smooth ground and ended up drowning and dying in that swamp as a trap He hunted animals for hundreds of years or thousands. ”

This fossil was removed from the site by Aguilar and Julio Simonini, one of the other paleontologists on the team, and must now be processed to remove the layer of sediment that surrounds it, known as a tosca, and they hope that once this process is done, the tail, or flow tube, is in one of the chambers. the museum. Visitors, who have been able to re-enter the museum for just over a month after more than 10 months of closure due to the Coronavirus pandemic, will be able to see one of the oldest fossils in the area.

See also  Why is it difficult to catch a fly?

“Of a particular kind, at this moment in time, that is an end EnnadinsHere in the region there are no pieces, the pieces that have been found correspond to a date between 20 and 40 thousand years, and they are more recent.