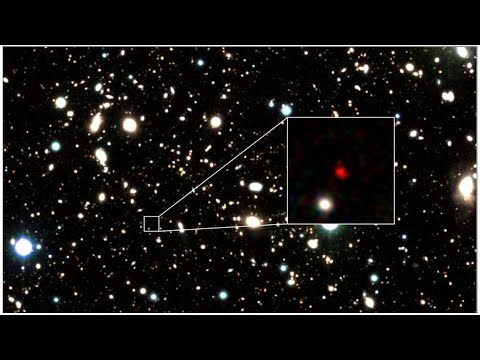 A group of astronomers made a historical discovery: the most distant galaxy ever discovered, Born in the early universe since 13.5 billion yearsin a study whose results should be confirmed in future observations.

Thanks for the job 1200 hour sky watch With the help of four telescopes, the HD1 galaxy can be found: a very bright object “its red color surprisingly matches the characteristics of a 13.5 billion-year-old galaxy,” its discoverer Yuichi Harikan explains, in a published statement. to the studio on friday Royal Astronomical Society.

Intuition was confirmed by complementary data collected by the ALMA observatory in Chile: HD1 It is located 100 million years from GN-z11So far the farthest galaxy has been discovered.

galaxy HD1 was born only 300 million years after the Big Bang, In a very primitive period of the universe. The emitted light travels for 13.5 billion years to reach Earth.

To determine its age, scientists measured the redshift of the light source. As the universe expands, the space between things expands. And as we go back to the past and further away from things, their light extends, Moving to increasingly red wavelengths.

“When I found this red, I got goosebumps”An astrophysicist from the University of Tokyo, one of the authors of the study published in The Astrophysical Journal, explains.

Scientists are beginning to speculate what exactly this galaxy is, which is considered the most distant, and the team proposes two ideas: HD1 may be forming stars at an amazing rate It may also host the Stars of the Third Society, the first stars in the universe, which, so far, have never been observed.

Another possibility is that HD1 contains files A supermassive black hole 100 million times the mass of our Sun. “Reaching such a mass in such a short time is almost credible,” says astrophysicist Françoise Coombes, of the PSL Paris Observatory, who was not involved in the study.

To solve these unknowns, the galaxy HD1 was chosen as The priority target of the James Webb Space Telescope and his unparalleled ability to contemplate the outermost universe.