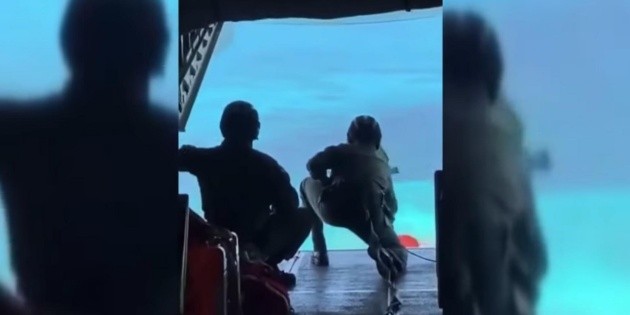 The three Cubans who were rescued from an uninhabited island in the archipelago of the Atlantic Ocean in the Bahamas, where 33 days passed and they survived eating coconuts and ratsThis Wednesday, at a hospital in the Florida Keys.

As reported by the US Coast Guard, The three Cubans, two men and a woman, were referred to the Lower Keys Medical Center, In Key West, in the far south of Florida (USA), without serious injuries.

It is not currently known whether the outcast trio, who were rescued on Tuesday from the tiny island of Anguilla Cay, were immigrants seeking to enter the United States by sea or fishermen.

The Cubans told the crew of a coast guard helicopter that rescued them about five weeks ago The ship they were sailing sank, but they managed to swim to the desert island.

According to them, all this time in that small island, located in the southeastern tip of Kay Sal Bank (known in Spanish as El Placer de los Roques), and between Cayo Hueso and Cuba, the three Cubans He survived eating snails, rats, and coconuts, as well as dealing with a shortage of fresh water.

“It was amazing. I don’t know how they did it. We were surprised that they were in good shape when we found them,” said Lt. Justin Dougherty, a US Coast Guard spokesman.

Coast Guard Brandon Murray told the local Sun Sentinel newspaper, “I don’t remember the time we rescued people stranded for more than a month on an island.”

According to this agency, During a routine air patrol, the Coast Guard spotted the three people waving a makeshift flagBut bad weather prevented them from rescuing the same day.

As shown in a video distributed by the Coast Guard, Officers threw food, water, and a radio at them to make the calls, and they finally managed to save them the next day.

Sean Connett, the 7th District Officer of the Coast Guard, said in a statement that it was “a very complex operation that involved assets and crews from different units.”

“Thanks to good communication and coordination between command centers and pilots, we were able to transport everyone safely to a medical center before the situation got worse,” he added.