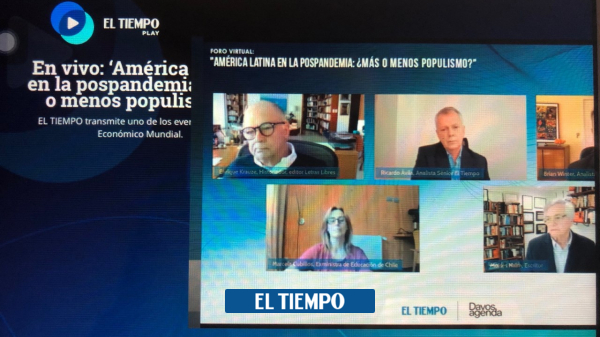 Some leaders have used the epidemic to concentrate power, which has hit democracy hard, especially in some Latin American countries. It was just a coincidence of four experts from the region that EL TIEMPO had summoned, to express their views on the outbreak and the danger of the spread of populism that some countries suffer today.

(Also read: The unemployment rate in December was 13.4 percent)

International writer and analyst Moises Naim, Mexican historian and editor of “Letras Libres” magazine, Enrique Krause; Former Minister of Education of Chile, Marcella Copello, Editor-in-Chief of “Americas Quaterly” and Vice President of the Council of the Americas, Brian WinterThey expressed their opinion about this dangerous outbreak of populism that is worsening in the region, the harm it could cause and the possible alternatives to combat it, in the conversation ‘Post-pandemic Latin America: More or Less Populist?, Which is part of the hypothetical programming planned by the World Economic Forum for 2021.

(Also read: An investigation is opened with the alleged processor for selling chlorine dioxide)

Under the supervision of Ricardo AvilaEL TIEMPO chief analyst, said the experts Strong leaders with more authority are required; Greater democratic education, joint and coordinated actions between countries, strengthening democracy and civic education, as well as restoring consensus on the rules of the game, to combat the growing populism in the region.

And while there is no magic formula to combat it, It is clear that in the current epidemiological situation, quacks, demagogues and populists saw in this scenario the exact opportunity to concentrate power. And experts say getting them out of that base will be extremely difficult if we don’t act quickly, forcefully, and with concerted action.

But how much of an escape has populism made in the midst of the pandemic? It is one of the questions surrounding him at the present time, given the risks that this could pose for the political and economic stability of countries and the region in general.

The risk of continuity

For Moisés Naím, the international Venezuelan analyst, except if there is more populism or not, what really worries him is whether or not there is more democracy under the current situation. This is nothing new, he notes, as there have always been attacks on democracy, however To the extent that the epidemic exacerbates the situation, and reduces economic growth, there will undoubtedly be better conditions for the growth of populism, It is the most dangerous as long as it feeds continuity.

He added that the epidemic could be a trigger for the anti-democratic forces that are making Latin America out of this crisis not only poorer and more unequal, but also with less democracy.

For Marcela Copilos, the former Minister of Education in Chile, it is clear that the epidemic has accelerated and deepened the crisis of democracy in her country, as it moved to a populist constituency, where the solution to the problems that its citizens suffer is the promise of a new constitution, aimed at reducing political control, not control. Akbar on political power.

In his opinion, they are suffering today from a populist tendency that they did not have decades ago in the conditions that are occurring and that feeds on the unreasonable polarization in a democracy but from the division of ethical categories that excel one another.

As long as there are no leaders, at least in Chile, willing to counter this populism, it will not evaporate on its own. As long as there are no leaders willing to tolerate at some point temporary unpopularity to undress and confront it, and above all to defend democracyIf we do not discuss options that are similar in legal terms, but politically different, democracy will gradually decline to levels that cause concern in Chile today. The analyst says.

When referring to this problem that has made the region on alert, the Mexican historian and editor of “Letras Libres” magazine, Enrique Krause, said that he always believed that the problem facing Latin America, and especially in Mexico, The problem of democratic education, because it is very difficult to teach democracy, was for the voter to have sufficient and clear elements to exercise their vote responsibly. And understand the meaning of the right to vote.

He cautions, however, that there is no time, but it is necessary to think about how the values ​​of democracy are transmitted to the population, and among these, the idea that power is a delegation that must be subject to modification or modification. Audit of accounts.

In this sense, Krause says the challenge will be how to teach democracy, Who says he agrees with Naeem “in knowing whether we have more or less democracy, but when do we come up with new, smart and effective ideas to obtain appropriate educational assets for democracy so that people can appreciate it.”

Brian Winter, editor-in-chief of the magazine “Americas Quaterly” and vice president of the Council of the Americas, interferes in this debate. He says that for decades it has been known that in Latin America once these populist leaders come to power, it becomes a difficult end to remove and put it as an example. Recent events that occurred in the United States, where it was necessary to resort to all the mechanisms of democracy acquired in more than 200 years of history to obtain a good result, albeit with a small margin.

See also  ➤ Janet Yellen: Failure to raise the debt ceiling "would cause irreparable damage" to the US economy.

He said he was referring to this situation in the United States, even though the topic was populism in Latin America, because he believed they were in an interesting experiment to deal with that populism symbolized by Donald Trump, but that includes other personalities in Latin America. Hemisphere.

“I think Biden’s success or failure in the coming months will have a big impact in the region,” says Brian, who believes that what happens in Latin America does not depend so much on the United States as he believes.

Brian believes that one of the ways to combat these populist trends is to improve civic education and access to good information, and that there is freedom of access to information, while we must restore the truth, and move away from false information to face the decline of democracy.

Moises Naim confirms that there is no unified response to these crises that we face in the region, if it is not one country after another. “Perhaps some countries could use the epidemic not as a trick to focus power, but as a positive force to make the necessary reforms but were never implemented. But the region suffers from a significant lag in terms of economic and institutional reforms politically,” he says.

Written by: Economics and Business