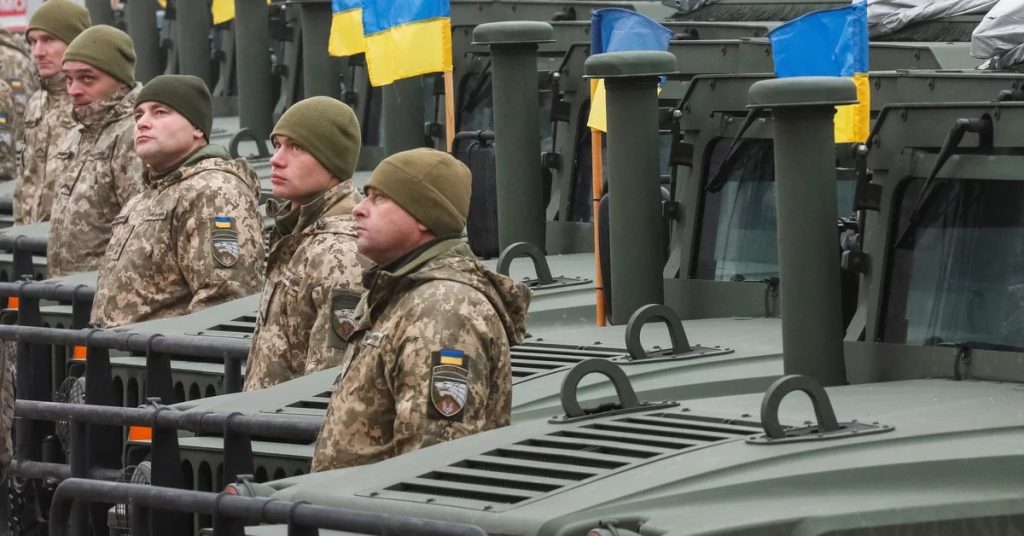 Ukrainian soldiers attend a rehearsal ceremony for the official handover of tanks, armored personnel carriers and military vehicles to the Ukrainian Armed Forces as the country celebrates Army Day in Kiev, Ukraine, on December 6, 2021. REUTERS/Gleb Garanish

The Ukrainian Border Guard Service and the US Embassy have launched a $20 million financing project in which Washington will contribute to strengthening the Ukrainian borders in the east and north of the country, Ukraine’s Interior Ministry reported on Saturday, amid tensions with Russia.

The Ukrainian Border Guard Service and the US Embassy have launched a project to enhance security in the northern and eastern parts of the Ukrainian border. The entity published on its Facebook account, in a message compiled by the Russian news agency Sputnik, said that the total attendance will reach $20 million.

Commissioning of the project, which deals directly with Ukraine’s eastern border with Russia and the northern border with Moscow’s ally Belarus, will begin in January 2022.

According to the note, The initiative provides for the possibility of providing the Ukrainian border service with unmanned aircraft systems, special vehicles, video surveillance and communications equipment, equipment, etc.

Tensions between Kiev and Moscow have increased in recent days due to the increased Russian military presence on the borderIt is an issue that has drawn criticism at the international level. US President Joe Biden and his allies have threatened “strong” action in response to what they see as a possible Moscow attack on Ukrainian soil, although Russian President Vladimir Putin has blamed NATO for trying to bolster its ties with Kiev, something that would have upset him.

See also  The first text message in history was auctioned for €107,000

Moscow stressed the need for Washington to ensure that it does not form a military alliance with new members or deploy weapons systems in areas close to its borders, describing NATO as “irresponsible” for its insistence on its expansion around the borders. Ukraine deploys “threatened weapons” “near Russian territory.

Indeed, Russia has decried the significant increase in NATO’s military presence in the Black Sea region, including warships with missiles on board, US strategic aircraft and large-scale exercises, some of which are unscheduled.

British Foreign Secretary Liz Truss and US Secretary of State Anthony Blinken, wear face masks to combat the spread of the coronavirus disease (COVID-19), in a photo before a bilateral meeting ahead of the Group of Seven foreign ministers summit in Liverpool, United Kingdom, Dec. 10 (Reuters)

The United States and the United Kingdom warned Russia on Saturday of the “serious consequences” of its forces’ eventual incursion into Ukraine, at the start of a meeting of G7 foreign ministers. The heads of British diplomacy, Liz Truss, and the American, Anthony Blinken, met before the start of the summit to be held this weekend in Liverpool (Northern England) and agreed to support Ukraine and its “deep concern” over the buildup of Russian troops along the border with that country.

“Both said that any Russian incursion would be a strategic mistake with serious consequences,” a British Foreign Office spokesman said in a statement.

Truss and Blinken also agreed on the importance of “defending and promoting freedom and democracy”, as well as the need for the G7 to show a united front in this regard. Both addressed in the same way the nuclear negotiations with Iran, which resumed in Vienna, and stressed the need for the Asian country to “intervene in a big way” to try to reach an agreement.

Other issues that Truss and Blinken tackled included bilateral cooperation on aspects such as technology or security, as well as the “Rebuilding the World Better” initiative to fund infrastructure in developing countries after the pandemic.

With information from Europa Press and EFE