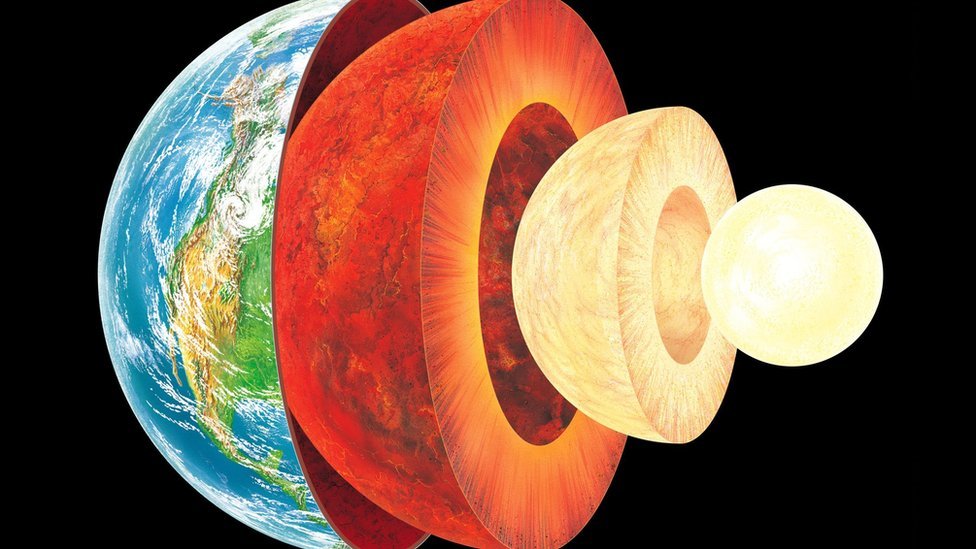 The earth consists of several layers, like an onion.

The fact is that the inner core of our planet, a compact mass of iron and nickel, is growing faster on one side than the other.

As revealed by a new study conducted by seismologists at the University of California at Berkeley and published in the journal natural earth sciences, the region of the core located in an area under the Banda Sea, in Indonesia, is larger than the part at the other end, below Brazil.

Through computer simulations, experts created a kind of map showing the growth of the Earth’s core over the past thousand million years and concluded that it behaved with “unbalanced pattern‘, with new ‘iron crystals’ forming more rapidly on the eastern side of the core.

“The west side looks different from the east side to the center, and not just at the top of the inner core, as some have suggested. The only way we can explain this is that one side is growing faster than the other.” Daniel Frost, one of the research associate scientists, said in a university statement.

According to experts, this phenomenon has implications for Earth’s magnetic field (which protects us from dangerous particles from the sun), because what the latter generates is convection in the outer core driven by the release of heat from the inner core.

The interior of the earth consists of layers similar to those of onions.

The last of them is the solid iron-nickel inner core, which has a radius of 1,200 kilometers, about three-quarters the size of the moon.

It is surrounded by liquid cast iron and a nickel outer core approximately 1,500 miles thick.

The outer core is in turn surrounded by a blanket of hot rocks 2,900 km thick and covered with a thin, cold rocky crust on the surface.

By studying seismic waves, experts analyze how these layers behave, but for years they have observed that the waves do not distribute in the same direction when they travel between the poles as when they travel in the equatorial region.

This assumption was the basis for understanding that there could be a certain difference in the Earth’s core that caused this phenomenon.

“The movement of liquid iron in the outer core pulls heat away from the inner core, causing it to freeze,” he told Frost in Live Science.

“This means that the outer core receives more heat from the east (under Indonesia) than from the west (under Brazil),” he added.

According to the scientist, the best way to visualize what is happening thousands of kilometers underground is to imagine cutting a tree trunk consisting of growth rings starting from a central point.

Scientists show that this faster growth in the Indonesian sea did not leave the core unbalanced.

Gravity distributes new growth evenly, keeping the inner core spherical and expanding its radius at a rate of one millimeter per year.

Computer simulations have also allowed seismologists to more accurately date the formation of the Earth’s core.

The core is known to have formed when the Earth was already lined up, apparently from a concentration of metals such as iron and nickel.

“We provide a fairly flexible age limit for the inner core, between 500 and 1.5 billion years, which could help the debate about how the magnetic field was created before the solid inner core existed,” said Barbara Romanovich, another researcher. In the study.

“We know that the magnetic field was already there 3 billion years ago, so there must have been other processes that drove convection in the outer core at that time,” he added.

According to the research, the younger age of the inner core may mean that early in Earth’s history, the boiling heat in the liquid core came from light elements that separated from the iron, not from the crystallization of iron, which is currently happening.

See also  Endless suffering on the island of La Palma: why science does not know how long the eruption of the Cumber Vega volcano will continue