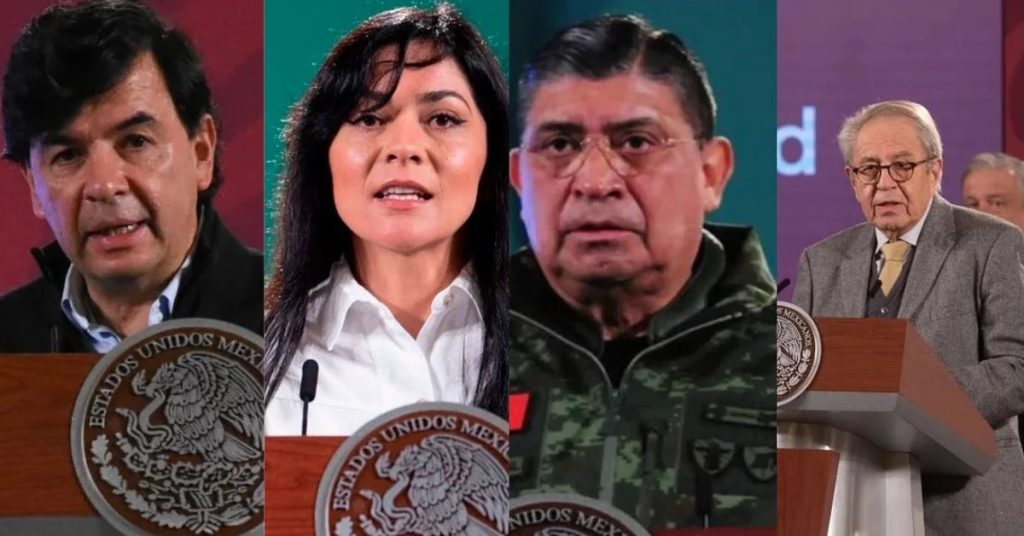 Some officials attended the morning conferences even twice in a row last week (Photos: Quartoscuro/Presidency)

On Monday, December 10, President Andres Manuel Lopez Obrador (AMLO) confirmed that he gave positive for COVID-19 For the second time in less than a year. And the information was published through his official account on Twitter, where he indicated that he provides it mild symptoms.

Despite the fact that Tabasco appeared this morning at the morning conference at the National Palace with a sore throat and a hoarse voice, alerts of a possible infection for SARS-CoV-2 began on January 7, when the head of the Economics Secretariat (SE), Tatiana ClotheerHe stated that he will isolate himself from public life due to his infection with the virus.

which is that both personalities held a private meeting at the residence of the Mexican President; but nevertheless, AMLO has not confirmed what exact day they met, just notified that it was between Monday or Tuesday of last week, January 3 or 4.

The message in which the President of Mexico confirmed his new infection with COVID-19 (Image: Twitter / @lopezobrador_)

However, due to the high prevalence of the Omicron Dynasty, some Fourth Transformation Officials could be in High risk of infection with the virus During his visit to the Treasury Room of the National Palace.

On January 3, one of the days when President Tatiana Clotheer could have met, they were present at the press conference: Ricardo Sheffield Padilla, head of the Federal Consumer Prosecutor’s Office (Profeco); Rosa Isela Rodriguez VelasquezHead of the Security and Citizen Protection Secretariat (SSPC); Rossio Nahla GarciaHead of the Department of Energy (Sener); Jesus Ramirez CuevasGeneral Coordinator of Social Communication and Official Spokesperson of the Presidency; As well as the special guest Jeremy CorbyHe is a member of the United Kingdom Parliament and a former leader of the Labor Party.

Jorge Alcocer was one of the guests at the morning conference (Photo: EFE/Madla Hartz)

On January 5th, there was only two official visits and it was a matter of Anna Elizabeth Garcia FilchesAnd the Director of Networks, President of the Presidency of the Republic and Head of the Department Who’s in Lies of the WeekAnd so is Ramirez Cuevas again.

Meanwhile, on January 6, a day before the Minister of Economy was declared infected, AMLO had a company Carlos Torres RosasGeneral Coordinator of Development Programs of the Ministry of Welfare.

Finally, on January 7, minutes after Clouthier announced his health via his Twitter account, the morning conference took place. In this case, the chief ruled so The test will not take placeBecause I have no symptoms. However, as in most events, the only person who accompanied him was Jesus Ramirez Cuevas.

Jesús Ramirez Cuevas is more likely to be susceptible to infection, as he shared several days with President Lopez Obrador (Photo: @sarapablo1/Twitter)

Unlike the past few months, during Second weekend of the year The Mexican president stayed in Mexico City and He has not made any official trip to any federal entitySome chains of infection have been severed.

However, on January 10, despite already showing symptoms of a possible infection, the CEO appeared in front of the media without a mask, which could lead to some infection due to salivation when he made his statements or he was having difficulty breathing due to infection. . The officials who were with Tabasco are back again Ricardo Sheffield Padilla s Rossio Nahla Garcia.

It is important to clarify that not only officials are at risk, but all those who attend the event organized by the Presidency every day, either State employees or in their capacity as accredited journalistsTherefore, it is important that they review the progression of the disease and take a test to rule out any infection, as well as follow the instructions of the health authorities.

AMLO tests positive for COVID-19 for the second time: ‘I will stay in isolation’
Claudia Sheinbaum wishes a speedy recovery from AMLO after his second infection with COVID-19
‘Dear President’: López Gatell’s message regarding the second infection of AMLO