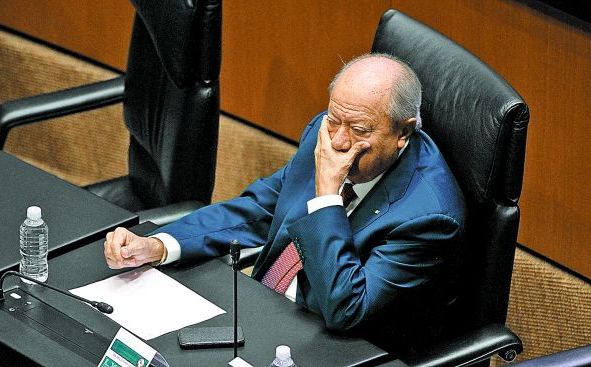 The Financial Intelligence Unit Find out in the past three years of the government Enrique Peña NietoAnd Carlos Romero Deschamps He and his family announced 88.6 million pesos and a deduction of 21.5 million, but they received more than 300 million deposits.

In addition, they withdrew more than 270 million pesos, bought jewelry, and sold and acquired real estate in Mexico And United State, and made 477 flights to seven countries, so the unit that drives Santiago Nieto Open a group investigation.

This scheme allowed the former leader of the trade union Mexican oil He appears to be using his wife, children, partners, and brother-in-law as name-holders to triangulate resources and evade taxes.

According to the search that Millennium It was access, the whole family Romero Deschamps Announced the past three years of the former president’s government Enrique Peña Nieto 88.6 million pesos and a discount of 21.5 million pesos.

The family also traveled 477 times to United Kingdom, Spain, Singapore, United States, Germany, Brazil And JapanDestinations they reached on several occasions on private trips without it being clear why they travel so frequently.

Alarms in the financial system in the final months of the PRI government heightened due to the extraordinary transfers in March 2018. Specifically, the former oil leader, from 2002 to 2004, withdrew 10 million pesos and received $2.5 million in deposits, while he announced, from 2013 to 2017, 22.1 million. She bought jewelry for 152,000 pesos in cash and sold a house for 15 million pesos, the income of which her daughter registered as a beneficiary.

to me UIF It was unusual that there was no record of payments from the Oil Union, so it is not known if they were paid in cash. It is also fitting that the same union gave a loan of 5 million pesos to one of his sons and 500,000 pesos to his sister’s brother without having a business relationship with Pemix.

All these contradictions about the wealth of a family Romero Deschamps It was filed in two complaints before Prosecutor of the Republic (FGR) in May 2019, for which no progress is known.

Among the results documented before FGR There is also a yacht purchase invincibleworth 35 million pesos was last seen on Quintana Rogue.

The wife of the ex-leader of the Oil Syndicate, Blanca Rosa Duran Limas, registered from 2016 to 2017, deposits of 6.8 million pesos and withdrawals of 7 million. She and her husband bought a house located in Polanco for 10 million pesos.

son-in-law, Alvaro Duran Limas, he was alerted because he received from the guild Pemix 500,000 pesos in 2017 without a job there. He withdrew 1 million pesos and has an account of 16.9 million pesos. In 2017, his sister unjustifiably sent 3 million pesos and is referred to by UIF With possible names for the former oil leader.

Paulina, daughter of Romero Deschamps, checks cashed worth 21.7 million pesos from 2011 to 2015 despite recording an income of 5.7 million in 10 years. He has an investment account of 6.8 million pesos that he designates as a beneficiary for his brother Alejandro Since 2017.

There is also an appropriation of 5 million pesos from the Loan Commission in Section 34 of Pemex Union Although it does not work there.

Juan Carlos Romero Duran and his wife Maria Fernando Uchigo, the son and daughter-in-law of the former oil leader, were alerted in 2009 and began buying property in United State Since 2005.

The financial system recorded 16 million pesos in deposits and 10.7 million in withdrawals when they did not file tax returns. They also transferred 5 million pesos to accounts in the United States in 2003.

They also appear as owners of a luxury apartment in Miami Beach, and two more on Brickell Street, one in downtown Miami, and one more in Coral Springs. Millennium I found that these properties are characterized by exclusivity, luxury and lack of transparency.