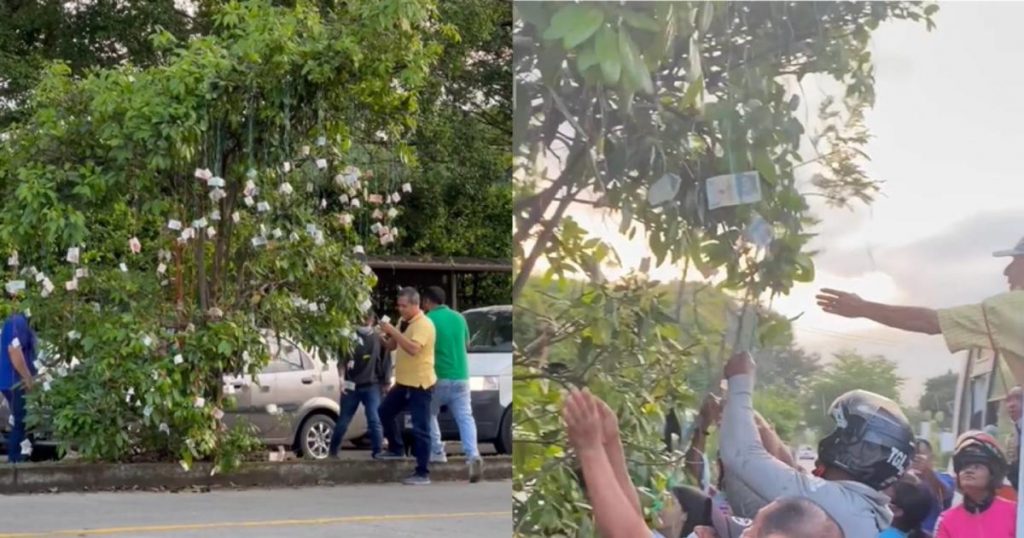 On the morning of October 8, some of the citizens of Cali, Colombia were so surprised to see a tree full of banknotes in the Bans strip that little by little many people began to gather to tear them from the branches.

In videos posted on social networks, it is seen how many people take all the money they can, and it is also noticed that motorists, motorcyclists and even a truck driver stopped their cars so that they could take something. On the recording, a minor is seen taking a good handful of bills to a woman in her car.

In the first local media reports, they reported that it may have been an advertising strategy, because in 2018 something similar happened in Bogota, Medellin and Cali, after which it became known that it was a campaign by the BBC’s craft brewery.

However, hours later, influencer Negro Esta Claro, whose real name is Kevin Esteban Rivera Bermúdeze, posted a video on his Facebook account and commented, “The miracle tree whose fruit is money, how do people react when they find this happy tree. Unique in the world.”

In the recording, Rivera appears Bermudezi writing a card that reads: “Take what you need and leave it to others. Take care of the tree. If you don’t need it, don’t take it.”

Then he explained that for the women who come to that place by public transport: “We have the money tree there. Many ladies come here from East Cali. They come and come to the Great Group from the West (MIO) or recreational ones. (The name that It’s known as the buses) they leave it here. They are the ladies who work in the family homes, who work hard and become the heads of the household. And they work hard to bring their food there to the area, to the people who have to work hard. Today we will reward them.”

The video also shows how people approached the tree to take the money and almost everyone ignored the sign, so he is heard shouting at them over and over “without damaging the tree!” In addition, it was noticed that more motorists stopped to take tickets.

This happens a few days after businesswoman and influencer Daneidy Barrera, better known as Epa Colombia, chartered a helicopter from the air to dump money in the municipality of Suesca in Cundinamarca. Although he did not say how much he waived, local media reported that the bills were in the amount of 50,000 Colombian pesos ($13).

This clash is imminent, but who is to blame?