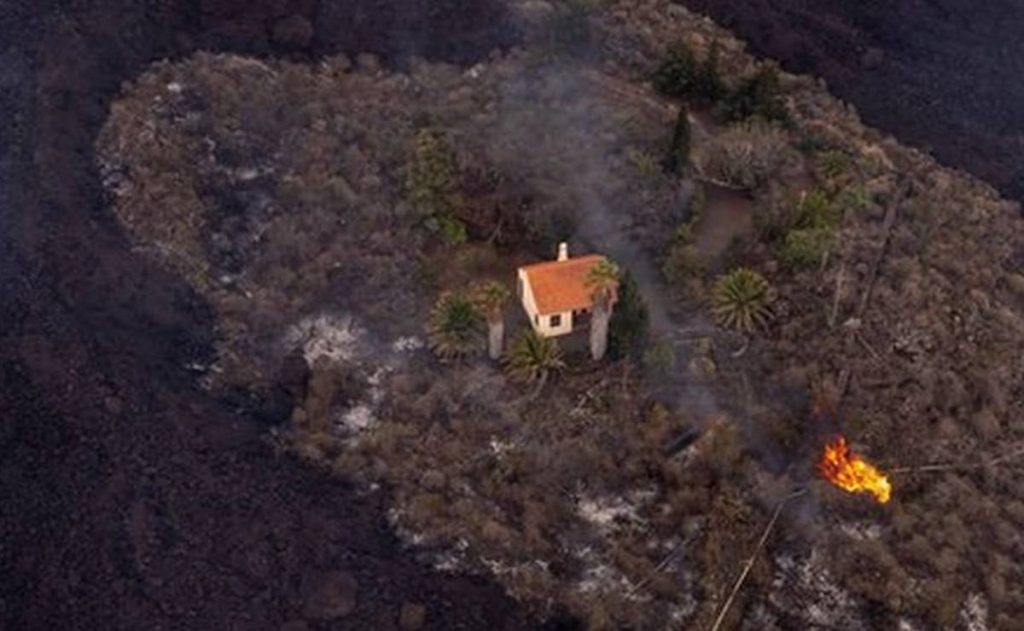 The dwelling was christened a “miracle house” for being affected by the ruined lava gorge, like many others.

A dramatic image shows a home in the Canary Islands that manages to escape a devastating lava crawl from an erupting volcano.

The volcano erupted last Sunday. More than 200 homes were destroyed and 6,000 people were evacuated.

Lava from Cumbre Vieja volcano continues to advance and scientists are unsure how long the eruption will last.

An image by photographer Alfonso Escalero shows the house surrounded by rivers of lava from the Cumbre Vieja volcano.

Owned by a retired Danish coupleInge and Ranier Cook, who have not visited the region since the beginning of the epidemic, according to the newspaper “El Mundo”.

Ada Monnekendam, who built the house with her husband, said she spoke to the owners, who told her, “While we can’t go now, we are relieved that it still stands.”

About 6000 people have been evacuated so far.

According to Monnikendam, the couple have friends in the area They lost everything in the volcanic catastrophe.

The lava washed away homes, schools, and some banana crops.

“They don’t want to talk to anyone because they can’t stop crying,” Monnekendam explained.

Monnikendam commented on the photo, saying it was “sad to know that the house is deserted out there and there is no one to take care of it”.

The local authorities have indicated that Lava can generate a chemical reaction from eruptions and toxic gases if it reaches the sea.

See also  Delta variant arrives in Mexico; It is spread in three states

However, experts announced Thursday that the lava is currently moving “extremely slowly.” It is not clear if the current will reach the coast.

The Prime Minister of Spain, Pedro Sanchez, traveled directly from La Palma to New York on a short trip to address the United Nations General Assembly, but he will immediately return to the Canary Islands to oversee emergency operations.