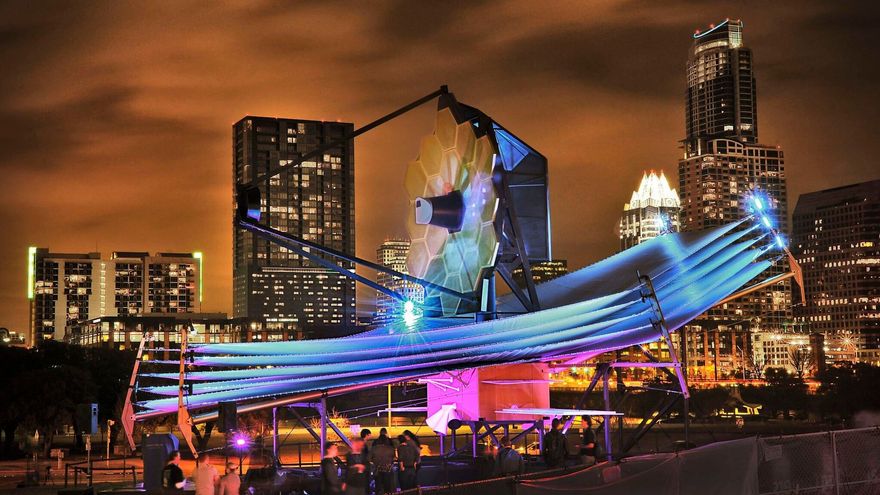 NASA will launch the James Webb Space Telescope into space, which will allow us to observe how the universe and potentially habitable exoplanets are formed. It’s the most important space mission ever built, explains Spanish astrophysicist at Harvard, Mercedes López Morales.

NASA is ready for another Apollo moment, like the one we experienced in 1969 when we first climbed to the moon, with the launch of the new James Webb Space Telescope, scheduled for December 24 and postponed again due to bad weather.

As NASA’s most ambitious telescope to date, its purpose is to fundamentally change our understanding of the universe.

Light takes time to travel. The closest star to Earth is four light years away, so the image we see of it is actually four years old.

The new $10 billion instrument is so powerful that it will allow us to see even more, looking back in time to see how the first stars and galaxies appeared.

It would also allow us to observe the atmospheres of exoplanets, some of which are potentially habitable. Light streaming through the atmosphere will leave telltale signs of atmospheric components.

Mercedes Lopez Morales, a professor in the Department of Astronomy and Astrophysics at the Harvard and Smithsonian Center for Astrophysics in Cambridge, Massachusetts, US, will be among the first researchers to use the James Webb Telescope, as part of a project to observe more than a dozen minor planets during the telescope’s first cycle .

Prior to joining Harvard University’s Center for Astrophysics, Lopez Morales worked at the Space Sciences Institute (CSIC) in Barcelona. She has authored more than 150 publications on topics related to astronomical instruments, stellar astrophysics and exoplanets, and has received numerous awards.

In the following interview, Certainly To The Harvard Gazzete, Lopez Morales spoke about the new telescope, named after the former NASA administrator who led the agency during the Apollo missions, and why it excited the scientific community.

Can you tell us about the Webb telescope mission?

The James Webb Telescope is the most important space mission ever built. It is the successor to the Hubble Space Telescope, which was launched more than 30 years ago and completely changed the way we understand how the universe operates at ultraviolet, visible, and near-infrared wavelengths. Unlike visible light, ultraviolet and infrared rays are hidden from the human eye and we need special detectors to “see” them. They contain the secrets of primordial galaxies and the chemical composition of outer space, as well as nearby planets. James Webb’s capabilities will take us further than what we learned with Hubble, by further opening our eyes to the infrared universe. We will be able to study the shape of the universe initially and determine when the first galaxies and stars formed.

What makes Webb the most ambitious space probe that NASA has ever built?

many things. NASA has been building this telescope for 25 years. In addition, thousands of scientists and engineers worked on its development. Perhaps the most important reason why it is so special is that there are many technological advances that are being used for the first time in a space telescope.

What are some of those technological advances?

One of the most remarkable is the primary mirror, which measures 6.5 meters in diameter, making it the largest telescopic mirror ever launched into space. In order to put such a large mirror on the launch vehicle, the engineers had to find a completely new way to build the mirrors. They split it into a series of hexagonal pieces, each with its own shape, so that it can be folded to launch, and then, once in space, unlocked and clamped like puzzle pieces into this huge and beautiful mirror drawn with a very large piece. A thin layer of gold, basically no gaps between the pieces.

Is the mirror a very important part of this perspective?

I always tell people that a mirror is like a cube. The larger the group, the more data you can collect. This means that it sees and collects more light, both visible and invisible. Basically, you can go further in the universe and go back in time.

What else surprises you about the telescope?

I will say parachute. There are two main requirements for a telescope to be able to produce high-quality observations. It should be kept cool, at a constant temperature of about minus 200°C, and it should be kept from being blinded by sunlight. A lens hood takes care of these requirements, and protects the telescope from sunlight and heat.

It is a technological masterpiece. It is made up of five ultra-thin layers covered with aluminum to reflect sunlight. Each layer is like a candle. At launch, the sunblock folds down, similar to a telescope mirror, and once in space, the sunblock unfolds to the size of a tennis court.

Can you tell us about your work with the telescope so far and what lies ahead?

One of my main research interests is understanding the atmospheres of exoplanets, planets that we’ve been discovering for more than two decades orbiting nearby stars. We’ve discovered a few thousand exoplanets and for the first time we can search for answers to a series of questions that weren’t possible before. I am part of teams that will for the first time search the atmospheres of several exoplanets in the infrared to search for molecular species such as methane, ammonia, carbon compounds, magnesium and silicates. We cannot detect it with current telescopes, including Hubble. The presence or absence of such chemical species will tell us whether the planets have atmospheres, and if they do, what they consist of and how it compares to the composition of similar planets in the solar system.

What is your best hope for this endoscope?

I hope it helps us discover things we haven’t thought of, because that’s how many major scientific breakthroughs are happening. Open a new window and discover that there is a lot of new information that we haven’t considered. I also hope that the discoveries will inspire younger generations, in the same way that the Hubble images have inspired many of us who are now scientists and engineers.