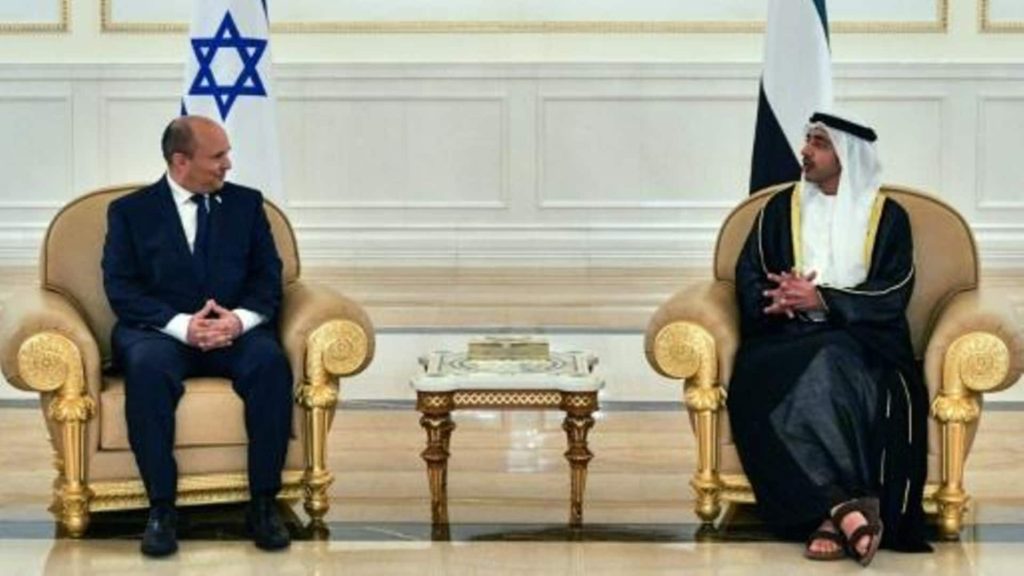 Trade and the economy are at the center of the historic meeting that took place on Monday between Naftali Bennett and the President of the United Arab Emirates, Sheikh Mohammed bin Zayed, on the occasion of the first official visit of an Israeli head of government to a Gulf country.

Bennett arrived in the United Arab Emirates on Sunday, just over a year after the two countries normalized relations.

And Emirati Foreign Minister Abdullah bin Zayed received the Israeli Prime Minister, and announced that he was “very happy to be here on the occasion of the first official visit of an Israeli leader.”

On September 15, 2020, the United Arab Emirates and Bahrain became the first two Gulf states to publicly normalize their relations with Israel, under the impulse of then-President of the United States, Donald Trump, and his son-in-law, Jared Kushner. The architect of this strategy.

This strategy was embodied in the so-called Ibrahim Accords, which led to similar agreements with Morocco and Sudan.

Since the signing, the UAE and Israel have signed several agreements in sectors ranging from tourism to aviation, including financial services.

In addition to the meeting with the crown prince, Bennett will meet officials in the fields of technology, culture and investments, according to a source from the Israeli delegation.

“The Emiratis are interested in Bennett’s experience in high-tech and business, and innovation in general in Israel,” said this source, who also referred to the development of trade between the two countries.

In an interview with the official UAE news agency WAM, the Israeli leader said he hoped that “our relations will continue to go well, especially in the economic field,” and referred to a “new reality” in the region.

On the Emirati side, no statement has been issued, and the press rarely covers this visit, as locals and Arabs remain hostile to Israel and in solidarity with the Palestinians.

The Palestinians denounced the Abrahamic Accords as treason because resolving the Israeli-Palestinian conflict has long been a condition for normalization of relations between Arab states and Israel.

In June, the head of Israeli diplomacy, Yair Lapid, opened Israel’s first embassy in the Gulf, in Abu Dhabi, as well as a consulate in Dubai, during an unprecedented official visit, while Emirati officials did the same in Tel Aviv.

Bennett’s visit to the UAE came when negotiations resumed in Vienna to save the Iranian nuclear agreement between Tehran and the main powers (the United States, Russia, China, France, Germany and the United Kingdom).

Emirates, which shares with Israel an aversion to Iran, nevertheless remains an important economic partner of the Islamic Republic.

See also  WhatsApp trick: How to activate the "spy" mode of the application? | sports game