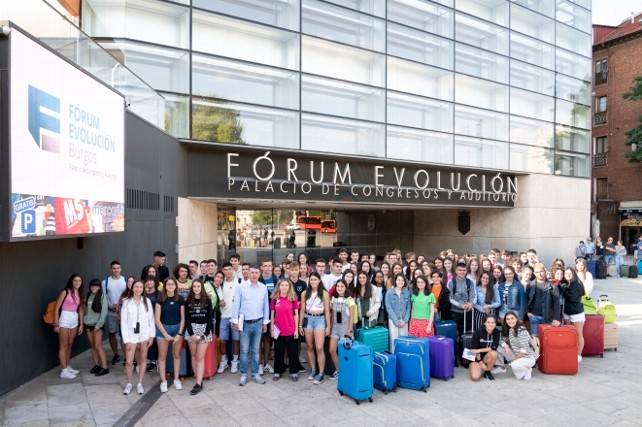 Acting Mayor of Burgos and President of Promiv Burgos, Vicente Marañón de Pablo, said farewell on Sunday to the first group of 100 students who will participate for the first time in the Burgos City Council’s Europe Project, through PROMUEVE Burgos – Association for the Development and Development of the City of Burgos. The second group of “Project Europe” will leave from the same place on Monday the 8th at 11:00 am, also from the door of the Evolution Forum, at the Paseo de la Sierra de Atapuerca in Burgos.

The Acting Mayor and President of Promiv Burgos, Vicente Marañón de Pablo, has highlighted the characteristics and development of a program aimed at facilitating the language immersion of the 100 students with the best academic records who have finished ESO in Burgos in the 2021-2022 academic year.

Two groups of 50 students leave Burgos for England on August 7 and 8 and will return on September 3 and 4, respectively. The 100 students are divided into 4 groups of 25 people, traveling to Oxford, Manchester, Eastbourne and Bournemouth for a linguistic, academic and cultural experience.

The residency will consist of 4-week English immersion courses, aimed at language improvement, following a total immersion methodology. The program covers both training courses and the rest of the activities, as well as accommodation and maintenance, on a full board basis.

Young people will be accommodated with families in destination cities, pre-selected for their suitability for this program, and will always be under the control and supervision of observers and qualified personnel responsible for their accommodation. In the same way, during academic hours, professors with a long history of participation in programs of this type, will be appointed to be responsible for teaching classes and applying immersion program methodologies.

The teaching experience will consist of at least 20 hours of classes per week, the criterion will be the distribution of students by level of knowledge, and pre-screening on arrival at the centers. Students will also interact with students of other nationalities and enjoy recreational, cultural and sports activities that complement the immersive experience, among which are: audiovisual productions, interaction with local businesses, sports and beach games, barbecues, sports competitions, visits to art fairs, competitions, etc. .

Accommodation will also include a final graduation ceremony and two trips to other UK cities.

Opposition groups have sharply criticized the project because they consider it to elude Sociedad Promiv’s powers, while Vox this week noted that Project Europe was shrouded in nepotism, arbitrariness and obscurantism.