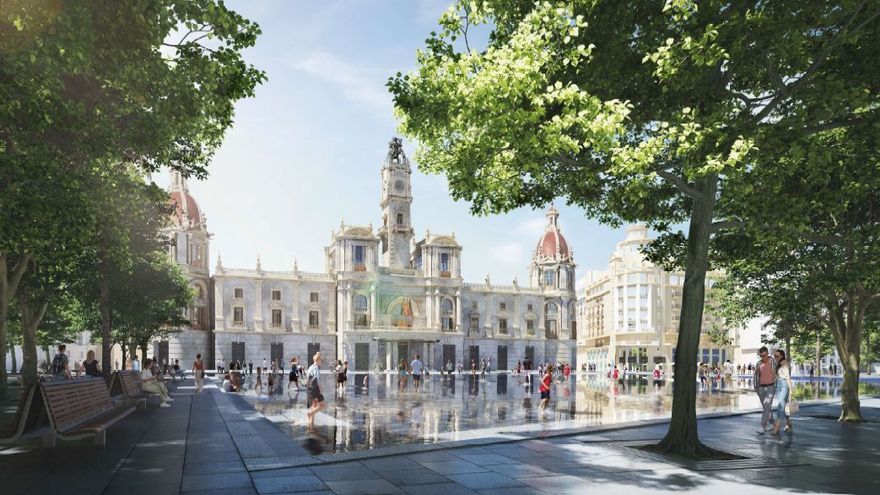 The Department of Urban Development, Sandra Gomez, presented this morning Five proposals Selected from the competition Ideas for rebuilding Valencia City Hall, to which 26 architectural and landscape firms applied, although only 22 submitted a formal bid. The names of applicants for the grand yard overhaul design will not be released until September. At the moment, only the logo of the five finalist proposals is known: “April”, “Batega València”, “Climate Canopy”, “Llenç 365” and “Re-Natura”.

The jury disqualified mobility proposals made by the architecture, urban planning and landscape offices on the grounds that they “did not improve the existing situation”, because “stations were far away” so they are pedestrian integrated as was considered at the time excluded. The plaza will thus preserve the existing road network, maintaining the passage of public transport in front of the frontage of the Communication Palace (Post Office) towards Calle de las Barcas and the traffic lane along Calle Lauria. The C1 line will remain from the EMT, at least for the time being. Regarding its possible suppression due to the small number of travelers using it, the jury decided that “social consensus will be required in its final course”.

Deputy Mayor and Urban Development Board member Sandra Gomez detailed the various selected proposals, some of which came from the United States, specifically an office in California. The proposals, based on the results of the previous citizen consultation process previously promoted by the City Council, Match in the idea of ​​a square lined with trees. . suggestion big plate of water Beside night lighting regulation To reduce light pollution without reducing security, thus integrating a gender perspective into this symbolic space. The reform of this square of a distinctively institutional character is highly conditioned by ceremonial events, in particular the valas and mascala parties, a condition not overlooked by the offices either.

The jury highlighted the proposal bearing its logo “April”, which stands out for a large plate of water with jets and lights in the central area of ​​the plaza, in front of the town hall, for its attractive image and to provide a large modular unit for the public space, which is treated as a planned urban square tree. This proposal introduces a new green corridor from San Vicente to the North Station with deciduous and perennial Mediterranean species that climatically improve the environment throughout the seasonal cycle. The presence of a layer of water and the possibility of misting it also provides new assets for climate adaptation. High drainage soils improve subsoil infiltration, as well as moisten vegetation, and qualitative restoration and rainwater reuse are suggested.

to “Batega Valencia” The jury highlighted its “minimalism” and that it combines the representative role of the square with small living areas and everyday use. It is proposed to preserve existing trees and increase the presence of vegetation while incorporating new trees and shrubs to generate 40% of the shaded area.

Climate Umbrella It was chosen to contemplate connecting the plaza with neighboring streets and the rest of the city, while “Re-nature”which doubled the current number of trees, captured the jury’s attention by creating a representation area with a theater as an amphitheater in front of City Hall and leaving the rest of the plaza as a wooded space with large specimens. “Fill out 365” It stands out for its proposals for “revegetation of space and the presence of water” as well as for the use of local materials and high durability. It selects plant species for their original character or adapts them to climatology, incorporating species with a personal character, specifically, citrus fruits.

Both proposals for more trees and underground structures must take into account the archaeological remains of the old monastery in San Francisco and the layout of a new subway tunnel planned for the square’s perimeter by Ferrocarrills de la Generalitat.

Eliminating the jet current source is an unknown in the competition. In three shows (Abril, Batega and Climatic Dosel), the fountain has been preserved and at times a new layer of water has been incorporated.

In September, the name of the winning office will be known, which will have six months to write the project with a budget of 560 thousand euros. The deputy mayor explained that her goal is to have the reform project ready in 2023, although the work “will be carried out in the next legislature”.

Suggestion for flower stands from “Llenç 365”

The jury is made up of technicians from the Ministry of Culture and the departments of Mobility, Urban Projects, Horticulture and Public Road Works, as well as the President of the College of Architects of Valencia, Marina Sender, Federico Bonet, on behalf of the College of Engineers, urban space expert Javier Pérez Igualada and urban gender planning expert Ines Novella. The deputy mayor, Sandra Gomez, delegated the chairing of the jury to the Urban Planning Coordinator, Carlos Fernandez.

Projects Gallery in the Square

The five final projects will be on display in the Plaza del Ayuntamiento during the month of June. They can also be consulted on the web and make contributions. This was made clear yesterday by Urban Development Consultant, Sandra Gomez, who emphasized that “we finally have the finalists for the ideas competition for what will be the future of the Plaza de l’Ajuntament”. The five proposals aim for a “new arena that is more welcoming, more participatory, sustainable and greener; and therefore more comprehensive. They were all selected by the jury “for their technical quality and for overcoming all the challenges we posed”

Twenty-six companies entered the competition, although only 22 finally submitted their proposals, based on the previous “Pensem la Plaça” entry process. hg valencia